Mar. 25 The Annunciation of Our Most Holy Lady, the Theotokos and Ever-Virgin Mary 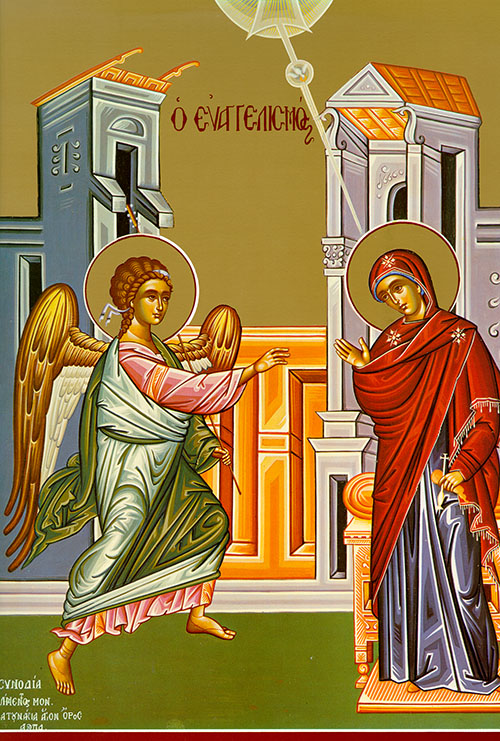 The Annunciation of the Mother of God and Ever-Virgin Mary: When, in the city of Nazareth, the angel of the Lord announced to Mary, “Behold, you will conceive and bear a son, and he will be called Son of the Most High.” Mary said, “Behold the handmaid of the Lord, let it be done to me according to your word.” And thus the fullness of time was accomplished, and he who before time was the only-begotten Son of God was made flesh for our sake and for our salvation, by the Holy Spirit and the Virgin Mary became human.

Today is the fountainhead of our salvation and the revelation of an eternal mystery: The Son of God becomes a virgin’s Son, and Gabriel announces this grace. Therefore, let us exclaim with him to the Mother of God: Hail, O woman full of grace, the Lord is with you!

O Mother of God, we your servants sing a hymn of thanks to you, a hymn of triumph to a valiant leader; for you have delivered us from all peril. We now exclaim to you: Hail, O Bride and Virgin ever-pure!

Brothers and sisters: He who consecrates and those who are consecrated have one and the same Father. Therefore he is not ashamed to call them brothers, saying, “I will announce your name to my brothers, I will sing your praise in the midst of the assembly”; and he says, “I will put my trust in him”; and again, “Here am I, and the children of God has given me!” Now, since the children are men of blood and flesh, Jesus likewise had a full share in ours, that by his death he might rob the devil, the prince of death, of his power, and free those who through fear of death had been slaves their whole life long. Surely he did not come to help angels, but rather the children of Abraham; therefore he had to become like his brothers in every way, that he might be a merciful and faithful high priest before God on their behalf, to expiate the sins of the people. Since he was himself tested through what he had suffered, he is able to help those who are tempted.

At that time. Zechariah’s wife, Elizabeth, conceived. She went into seclusion for five months, saying: “In these days the Lord is acting on my behalf; he has seen fit to remove my reproach among men.”

In the sixth month, the angel Gabriel was sent from God to a town of Galilee names Nazareth, to a virgin betrothed to a named Joseph, of the house of David. The virgin’s name was Mary. Upon arriving, the angel said to her: “Rejoice, O highly favored daughter! The Lord is with you. Blessed are you among women.” Mary was deeply troubled by his words, and wondered what his greeting meant. The angel went on to say to her: “Do not fear, Mary. You have found favor with God. You shall conceive and bear a son and give him the name Jesus. Great will be his dignity and he will be called Son of the Most High. The Lord God will give him the throne of David his father. He will rule over the house of Jacob forever and his reign will be without end.”

Mary said to the angel, “How can this be since I do not know man?” The angel answered her: “The Holy Spirit will come upon you and the power of the Most High will overshadow you; hence, the holy offspring to be born will be called Son of God. Know that Elizabeth your kinswoman has conceived a son in her old age; she who was thought to be sterile is now in her sixth month, for nothing is impossible with God.”

Mary said: “I am the servant of the Lord. Let it be done to me as you say,” With that the angel left her.