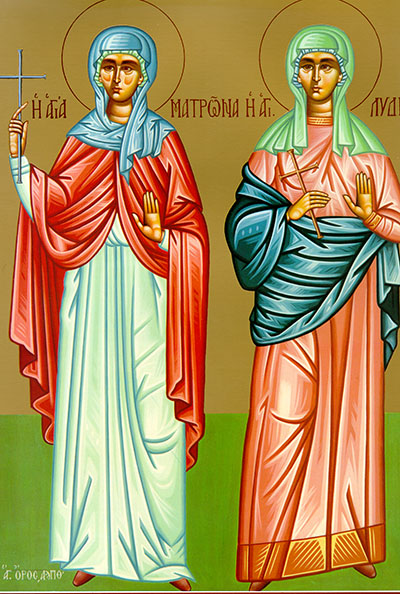 An orphan, Matrona was a servant in the home of a Jewish man in Thessalonica in the mid-fourth century. The wife of her master continually mocked Matrona for her faith in Christ. She tried to persuade Matrona to deny Christ and attend the synagogue. But the meek Matrona went about her work conscientiously and said nothing to her mistress. One one occasion, it was discovered that Matrona was attending church unbeknownst to her mistress. In her anger, she asked Matrona why she did not attend the synagogue rather than the church. To this Matrona replied: “Because God lives in the Christian churches, and He withdraws from the Jewish synagogues.” Furious at this bold reply, the mistress beat Matrona, locked her in a dark room, and bound her hands. The next day as Matrona was kneeling in prayer and glorifying God, her ropes fell off by the power of God. On two more occasions she was locked up again. In the end she died of starvation. The evil mistress then took the body of the holy maiden and hurled it to the ground from the roof of her home. Christians took the martyr’s body and buried it with honor. Bishop Alexander, learning of the many miraculous works of this holy martyr, erected a church over her grave.

O Jesus, your lamb Matrona cries out to You with great love: O my Bridegroom, I long for You in great pain. I am crucified with You, and in baptism I am buried with You. I suffer for your sake in order to reign with You. I die for You in order to live in You. Accept me as an immaculate victim since I am immolated for your love. Through her intercession, O merciful One, save our souls.

You worked with honor for the Master and steadfastly refused to dishonor Him. You endured imprisonment and wounds and even gave your life for Him. O martyr Matrona, so wise in God, now pray for those who honor your mercy.

Brothers and sisters: When God made his promise to Abraham, he swore by himself, having no one greater to swear by, and said, “I will indeed bless you, and multiply you.” And so, after patient waiting, Abraham obtained what God had promised. Men swear by someone greater than themselves; an oath gives firmness to a promise and puts an end to all argument. God, wishing to give the heirs of his promise even clearer evidence that his purpose would not change, guaranteed it by oath, so that, by two things that are unchangeable, in which he could not lie, we who have taken refuge in him might be strongly encouraged to seize the hope which is placed before us. Like a sure and firm anchor, that hope extends beyond the veil through which Jesus, our forerunner, has entered on our behalf, being made high priest forever according to the order of Melchizedek.

Brothers and sisters: Live as children of light. Light produces every kind of goodness and justice and truth. Be correct in your judgment of what pleases the Lord. Take no part in vain deeds done in darkness; rather, condemn them. It is shameful even to mention the things people do in secret; but when such deeds are condemned they are seen in the light of day, and all that appears is light. That is why we read: “Awake, O sleeper, arise from the dead, and Chrsit will give you light.”

Keep careful watch over your conduct. Do not act like fools, but like thoughtful men. Make the most of the present opportunity, for these are evil days. Do not continue in ignorancex, but try to discern the will of the Lord. Avoid getting drunk on wine; that leads to debauchery. Be filled with the Spirit, addressing one another in psalms and hymns and inspired songs. Sing praise to the Lord with all your hearts.

At that time a man approached Jesus and said: “Teacher, I have brought my son to you because he is possessed by a mute spirit. Whenever it sees him it throws him down; he foams at the mouth and grinds his teeth and becomes rigid. Just now I asked your disciples to expel the spirit, but they were unable to do so.” Jesus replied by saying to the crowd, “What an unbelieving lot you are! How long must I remain with you? How long can I endure you? Bring the boy to me.” When they did so the spirit caught sight of Jesus and immediately threw the boy into convulsions. As he fell to the ground he began to roll around and foam at the mouth. Then Jesus questioned the father: “How long has this been happening to him?” “From childhood,” the father replied. “Often it throws him into the fire and into water. You would think it would kill him. If out of the kindness of your heart you can do anything to help us, please do!” Jesus said, “‘If you can’? Everything is possible to a man who trusts.” The boy’s father immediately exclaimed, “I do believe! Help my lack of trust!” Jesus, on seeing a crowd rapidly gathering, reprimanded the unclean spirit by saying to him, “Mute and death spirit, I command you: get out of him and never enter him again!” Shouting, and throwing the boy into convulsions, it came out of him; the boy became like a corpse, which caused many to say, “He is dead.“ But Jesus took him by the hand and helped him to his feet. When Jesus arrived at the house his disciples began to ask him privately, “Why is it that we could not expel it?“ He told them, “This kind you can drive out only by prayer.“

They left that district and began a journey through Galilee, but Jesus did not want anyone to know about it. He was teaching his disciples in this vein: “the Son of Man is going to be delivered into the hands of men who will put him to death; three days after his death he will rise.