Mar. 28 Our Venerable Father Hilary the Younger & The Holy Stephen the Wonder-worker 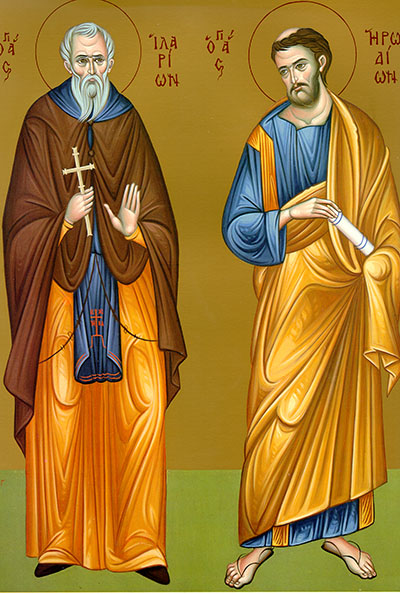 St. Hilarion the New, Heguman of Pelekete Monastery, from his youth devoted himself to the service of God and spent many years as a hermit. Because of his holy and blameless life he was ordained to the holy priesthood, and later he was made igumen of the Pelekete monastery, near the Dardanelles, in the eighth century. St. Hilarion was granted gifts of clairvoyance and wonderworking by the Lord.

St. Stephen the Confessor, Hegumen of Triglia Monastery, suffered under the iconoclast emperor Leo the Armenian (813-820). From a young age, the holy ascetic dedicated his life to God and received monastic tonsure. He later became the head of the Trigla monastery near Constantinople. When the persecution again began against holy icons, the saintly hegumen was summoned for questioning, and they tried to force him to sign a document rejecting the veneration of icons. St. Stephen steadfastly refused to betray Orthodoxy and he boldly denounced the emperor for his impiety. They subjected the saint to cruel torments, after which they sent him to prison in the year 815. Weakened and sick, the holy Confessor Stephen soo dies in prison from his sufferings.

Having glowed like the sun, your memory gives joy to the faithful. It disperses the darkness and casts out passion. Shelter and guard us from all the trials of life. We honor your holy precious memory, O honorable Hilarion and blessed Stephen.

Abram settled in the land of Canaan, while Lot settled among the cities of the Plain and moved his tent as far as Sodom. Now the people of Sodom were wicked, great sinners against the Lord.

The Lord said to Abram, after Lot had separated from him, “Raise your eyes now, and look from the place where you are, northward and southward and eastward and westward; 15 for all the land that you see I will give to you and to your offspring forever. I will make your offspring like the dust of the earth; so that if one can count the dust of the earth, your offspring also can be counted.  Rise up, walk through the length and the breadth of the land, for I will give it to you.”  So Abram moved his tent, and came and settled by the oak of Mamre, which are at Hebron; and there he built an altar to the Lord.

The fear of the Lord is a fountain of life, so that one may avoid the snares of death.

The glory of a king is a multitude of people; without people a prince is ruined.

Whoever is slow to anger has great understanding, but one who has a hasty temper exalts folly.

A tranquil mind gives life to the flesh, but passion makes the bones rot.

Those who oppress the poor insult their Maker, but those who are kind to the needy honor him.

The wicked are overthrown by their evildoing, but the righteous find a refuge in their integrity.

Wisdom is at home in the mind of one who has understanding, but it is not known in the heart of fools.

Righteousness exalts a nation, but sin is a reproach to any people.

A servant who deals wisely has the king’s favor, but his wrath falls on one who acts shamefully.

A soft answer turns away wrath, but a harsh word stirs up anger.

The tongue of the wise dispenses knowledge, but the mouths of fools pour out folly.

The eyes of the Lord are in every place, keeping watch on the evil and the good.

A gentle tongue is a tree of life, but perverseness in it breaks the spirit.