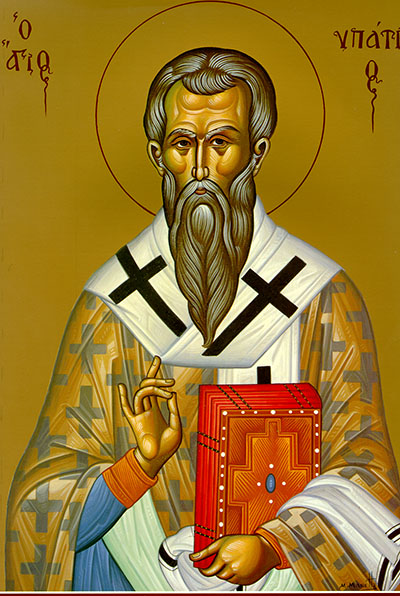 Hypatius was born in Cilicia and was the bishop of Gangra. He was present at the First Ecumenical Council (Nicea, 325) and was renowned by all for his pious life and miracle-working. The Emperor Constantius ordered that a likeness of Hypatius be made during the saint’s lifetime. The emperor kept the likeness in his palace as a weapon against all adverse powers. Once, upon returning from Constantinople, Hypatius was attacked in a narrow gorge by Novatian heretics and was thrown from the road into the mud. At that moment a woman from that group struck him on the head with a stone, and thus the saint died. Immediately the woman went insane and took that same stone and struck herself with it. When they took her to the grave of St. Hypatius, he interceded before God on her behalf. She was healed by the greatly compassionate soul of Hypatius, and lived the remainder of her life in repentance and prayer. St. Hypatius died in the year 326.

In you, O holy father Hypatius, the faithful image of God shone forth, for you carried your cross and followed Christ. You taught by your deeds how to spurn the body, for it passes away; and how to value the soul, for it is immortal. Therefore, your soul is forever in happiness with the angels.

Then the Lord said, “How great is the outcry against Sodom and Gomorrah and how very grave their sin! I must go down and see whether they have done altogether according to the outcry that has come to me; and if not, I will know.”

The highway of the upright avoids evil; those who guard their way preserve their lives.

Pride goes before destruction, and a haughty spirit before a fall.

It is better to be of a lowly spirit among the poor than to divide the spoil with the proud.

Those who are attentive to a matter will prosper, and happy are those who trust in the Lord.

The wise of heart is called perceptive, and pleasant speech increases persuasiveness.

Wisdom is a fountain of life to one who has it, but folly is the punishment of fools.

The mind of the wise makes their speech judicious, and adds persuasiveness to their lips.

Pleasant words are like a honeycomb, sweetness to the soul and health to the body.

Sometimes there is a way that seems to be right, but in the end it is the way to death.

The appetite of workers works for them; their hunger urges them on.

Scoundrels concoct evil, and their speech is like a scorching fire.

The violent entice their neighbors, and lead them in a way that is not good.

One who winks the eyes plans perverse things; one who compresses the lips brings evil to pass.

Gray hair is a crown of glory; it is gained in a righteous life.

One who is slow to anger is better than the mighty, and one whose temper is controlled than one who captures a city.

The lot is cast into the lap, but the decision is the Lord’s alone.

Better is a dry morsel with quiet than a house full of feasting with strife.

A slave who deals wisely will rule over a child who acts shamefully, and will share the inheritance as one of the family.

The crucible is for silver, and the furnace is for gold, but the Lord tests the heart.

An evildoer listens to wicked lips; and a liar gives heed to a mischievous tongue.

Those who mock the poor insult their Maker; those who are glad at calamity will not go unpunished.

Grandchildren are the crown of the aged, and the glory of children is their parents.

Fine speech is not becoming to a fool; still less is false speech to a ruler.

A bribe is like a magic stone in the eyes of those who give it; wherever they turn they prosper.

One who forgives an affront fosters friendship, but one who dwells on disputes will alienate a friend.

A rebuke strikes deeper into a discerning person than a hundred blows into a fool.

Evil people seek only rebellion, but a cruel messenger will be sent against them.

Better to meet a she-bear robbed of its cubs than to confront a fool immersed in folly.

Evil will not depart from the house of one who returns evil for good.

The beginning of strife is like letting out water; so stop before the quarrel breaks out.

One who justifies the wicked and one who condemns the righteous are both alike an abomination to the Lord.

Why should fools have a price in hand to buy wisdom, when they have no mind to learn?

A friend loves at all times, and kinsfolk are born to share adversity.