Mar. 30 Our Venerable Father John Climacus, Author of “The Ladder” 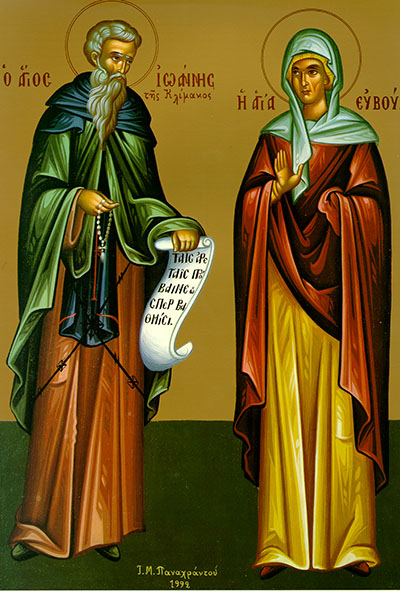 John Climacus is the author of The Ladder of Divine Ascent. John came to Mount Sinai as a sixteen year old youth and remained there, first as a novice, later as a recluse, and finally as abbot of Sinai until his eightieth year, when he reposed, in about the year 649. After the death of his spiritual father, John withdrew into a cave, where he lived a life of strict asceticism for twenty years. At the insistence of the brotherhood, John agreed to become abbot, and he directed the salvation of the souls of men with zeal and love. Certain people reproached John for talking too much. Not at all angered by this, John nevertheless remained silent for an entire year. He did not utter a word until the brothers implored him to speak, and to continue teaching them his God-given wisdom. During his silence in the cave, John wrote many worthwhile books, of which the most glorious is The Ladder.  In this book, John describes the method of raising the soul to God, comparing it to the climbing of a ladder.

We find your virtues to be a ladder leading us to heaven, O venerable father John. You have become virtue personified, O glorious saint.

The Lord has placed you on the pinnacle of chastity, O father John, our guide. Like a brilliant star you shed light on the earth.

God said to Abraham, “As for you, you shall keep my covenant, you and your offspring after you throughout their generations.

A wise child makes a glad father, but the foolish despise their mothers.

Folly is a joy to one who has no sense, but a person of understanding walks straight ahead.

Without counsel, plans go wrong, but with many advisers they succeed.

To make an apt answer is a joy to anyone, and a word in season, how good it is!

For the wise the path of life leads upward, in order to avoid Sheol below.

The Lord tears down the house of the proud, but maintains the widow’s boundaries.

Evil plans are an abomination to the Lord, but gracious words are pure.

Those who are greedy for unjust gain make trouble for their households, but those who hate bribes will live.

The mind of the righteous ponders how to answer, but the mouth of the wicked pours out evil.

The Lord is far from the wicked, but he hears the prayer of the righteous.

The light of the eyes rejoices the heart, and good news refreshes the body.

The ear that heeds wholesome admonition will lodge among the wise.

Those who ignore instruction despise themselves, but those who heed admonition gain understanding.

The fear of the Lord is instruction in wisdom, and humility goes before honor.

The plans of the mind belong to mortals, but the answer of the tongue is from the Lord.

All one’s ways may be pure in one’s own eyes, but the Lord weighs the spirit.

Commit your work to the Lord, and your plans will be established.

The Lord has made everything for its purpose, even the wicked for the day of trouble.

All those who are arrogant are an abomination to the Lord; be assured, they will not go unpunished.

By loyalty and faithfulness iniquity is atoned for, and by the fear of the Lord one avoids evil.

When the ways of people please the Lord, he causes even their enemies to be at peace with them.

Better is a little with righteousness than large income with injustice.

The human mind plans the way, but the Lord directs the steps.