May 01 The Holy Prophet Jeremiah 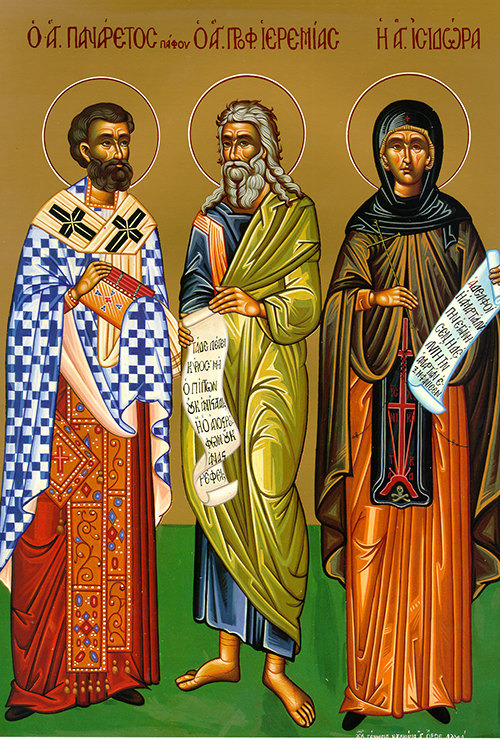 The holy prophet Jeremiah, who suffered many persecutions at the time of Joachim and Zedekiah, kings of Judah. He warned of the destruction of the Holy City and the deportation of the people. For this reason, the Church has held him to be a figure of the patience of Christ. He also foretold the new and everlasting covenant, consummated in Christ Jesus himself, by whom the omnipotent Father would write the law on the deepest heart of the children of Israel, that he himself might be their God and they might be his people. (cf. Jer 32:38)

As we celebrate the memory of your prophet Jeremiah, O Lord, we implore You to save our souls through his prayers.

O great prophet and martyr, you received the gift of prophecy after you purified your heart by the fire of the Spirit. How loudly you proclaimed the message, O Jeremiah: This is our God, and you shall have none other before Him. He has taken on flesh and has appeared on earth.

In those days, as the number of disciples grew, the ones who spoke Greek complained that their widows were being neglected in the daily distribution of food, as compared with the widows of those who spoke Hebrew. The Twelve assembled the community of the disciples and said, “It is not right for us to neglect the word of God in order to wait on tables. Look around among your own number, brothers, for seven men acknowledged to be deeply spiritual and prudent, and we shall appoint them to this task. This will permit us to concentrate on prayer and the ministry of the word.” The proposal was unanimously accepted by the community. Following this they selected Stephen, a man filled with faith and the Holy Spirit; Philip, Prochorus, Nicanor, Timon, Parmenas, and Nicolaus of Antioch, who had been a convert to Judaism. They presented these men to the apostles, who first prayed over them and then imposed hands on them.

The word of God continued to spread, while at the same time the number of disciples in Jerusalem enormously increased. There were many priests among those who embraced the faith.

At that time, Joseph from Arimathea arrived — a distinguished member of the Sanhedrin. He was another who looked forward to the reign of God. He was bold enough to seek an audience with Pilate and urgently requested the body of Jesus. Pilate was surprised that Jesus should have died so soon. He summoned the centurion and inquired whether Jesus was already dead. Learning from the centurion that Jesus was dead, Pilate released the corpse to Joseph. Then, having bought a linen shroud, Joseph took Jesus down, wrapped him in the linen, and placed him in a tomb which had been cut out of rock. Finally he rolled a stone across the entrance of the tomb. Meanwhile, Mary Magdalene and Mary the mother of Joses observed where Jesus had been entombed.

When the Sabbath was over, Mary Magdalene, Mary the mother of James, and Salome brought perfumed oils with which they intended to go and anoint Jesus. Very early, just after sunrise, on the first day of the week they came to the tomb. They were saying to one another, “Who will roll back the stone for us from the entrance of the tomb?” When they looked, they found that the stone had been rolled back (it was a huge one). On entering the tomb they saw a young man sitting at the right, dressed in a white robe. This frightened them thoroughly, but he reassured them: “You need not be amazed! You are looking for Jesus of Nazareth, the one who was crucified. He has been raised up; he is not here. See the place where they buried him. Go now and tell his disciples and Peter, ‘He is going ahead of you to Galilee, where you will see him just as he told you.’” They made their way out and fled from the tomb bewildered and trembling; and because of their great fear, they said nothing to anyone.