May 02 Our Father among the saints Athanasius the Great 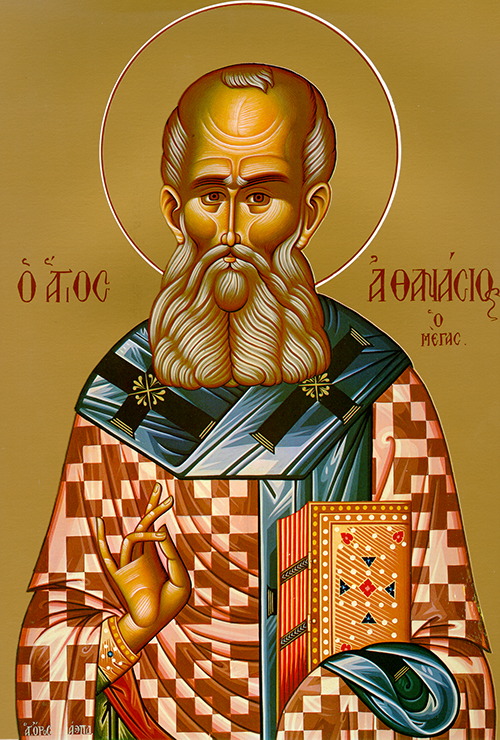 Our holy father Athanasius the Great, archbishop of Alexandria, most outstanding in his holiness and teaching, who vigorously fought for the orthodox faith in Alexandria and Egypt from the time of Constantine to that of the emperor Valens. He patiently suffered many intrigues from the Arians and was frequently forced into exile. When he had finally returned to the Church entrusted to him, after many trials and crowns of patience, he rested in the peace of Christ in the forty-sixth year of his priesthood in the year 373.

You were the pillar of Orthodoxy, supporting the Church. You preached the divine dogma that the Son was of one nature with the Father, O holy father and archbishop Athanasius, you made Arius blush with shame. Beg Christ our God to have mercy on us.

Blaring trumpet of the Lord and flute of the Spirit, O great Athanasius, o fiery mind, it is fitting to sing your praises with hymns; for you taught us to honor the Trinity of one essence.

Stephen was a man filled with grace and power, who worked great wonders and signs among the people. Certain members of the so-called “Synagogue of Roman Freedmen” (that is, the Jews from Cyrene, Alexandria, Cilicia, and Asia) would undertake to engage Stephen in debate, but they proved no match for the wisdom and spirit with which he spoke. They persuaded some men to make the charge that they had heard him speaking blasphemies against Moses and God, and in this way they incited the people, the elders, and the scribes. All together they confronted him, seized him, and led him off to the Sanhedrin. There they brought in false witnesses, who said: “This man never stops making statements against the holy place and the law. We have heard him claim that Jesus the Nazorean will destroy this place and change the customs which Moses handed down to us.” The members of the Sanhedrin who sat there stared at him intently. Throughout, Stephen’s face seemed like that of an angel.

The high priest asked whether the charges were true. To this Stephen replied: “My brothers! Fathers! Listen to me. The God of glory appeared to our father Abraham when he was still in Mesopotamia and before he styles in Haran. God said to him, Leave your country and your kinsfolk, and go to the land I will show you. So he left the land of the Chaldeans and settled in Haran. After Abraham’s father died, God made him move from there to this land where you now dwell. God did not give him any of it as his heritage, not even a foot of land.

“You stiff-necked people, uncircumcised in heart and ears, you are always opposing the Holy Spirit just as your fathers did before you. Was there ever any prophet who your fathers did not persecute? In their day, they put to death those who foretold the coming of the Just One; now you in your turn have become his betrayers and murderers. You who received the law through the ministry of angels have not obeyed it.”

Those who listened to his words were stung to the heart; they ground their teeth in anger at him. Stephen meanwhile, filled with the Holy Spirit, looked to the sky above and saw the glory of God, and Jesus standing at God’s right hand. “Look!” he exclaimed, “I see an opening in the sky, and the Son of Man standing at God’s right hand.” The onlookers were shouting aloud, holding hands over their ears as they did so. Then they rushed at him as one man, dragged him out of the city, and began to stone him. The witnesses meanwhile were piling their cloaks at the feet of a young man named Saul. As Stephen was being stoned he could be heard praying, “Lord Jesus, receive my spirit.” He fell to his knees and cried out in a loud voice, “Lord, do not hold this sin against them.” And with that he died.

At that time in Capernaum there happened to be a royal official whose son was ill. When he heard that Jesus had come back from Judea to Galilee, he went to Jesus and begged him to come down and restore health to his son, who was near death. Jesus replied, “Unless you people see signs and wonders, you do not believe.” “Sir,” the royal official pleaded with Jesus, “come down before my child dies.” Jesus told him, “Return home. Your son will live.” The man out his trust in the word Jesus spoke to him, and started home.

He was on his way there when his servants met him with the news that his boy was going to live. When he asked them at what time the boy had shown improvement, they told him, “The fever left him yesterday afternoon about one.” It was at that very hour, the father realized, that Jesus had told him, “Your son is going to live.” He and his whole household thereupon became believers. This was the second sign that Jesus performed on returning from Judea to Galilee.