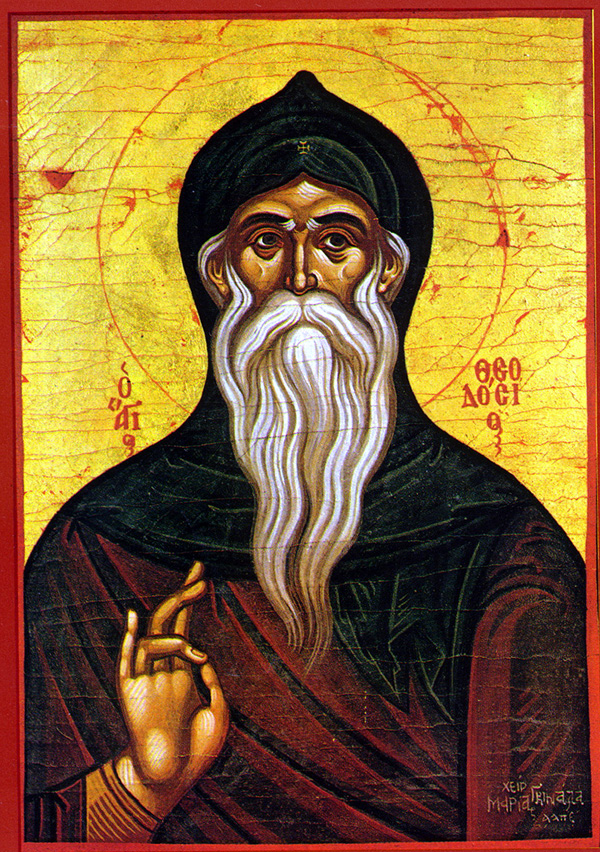 Theodosius the Great founded the first cenobitic monastery in Palestine during the fifth century. He left his monastery to champion Orthodoxy when a heresy arose under the Emperor Anastasius. He traveled to Jerusalem and in the church, he stood at the high place and cried out for all to hear: “Whoever does not honor the four Ecumenical Councils, let him be anathema!” For this bold deed the monk was sent to prison, but soon returned after the death of the emperor. Saint Theodosius accomplished many healings and other miracles during his life, coming to the aid of the needy. Also by his intercession, soldiers were saved from death, and he saved those perishing in shipwrecks and those lost in the desert. Before his death, Saint Theodosius summoned to him three beloved bishops and revealed to them that he would soon depart to the Lord. After three days, he died at the age of 105. The saint’s body was buried with reverence in the cave in which he lived at the beginning of his ascetic deeds.

Loving the monastic life from your youth, you climbed the summit of virtue. Achieving your goal, you took up life in a cave. Perfecting your life by fasting, you became like an angel. You have enlightened all the Slav lands like a star. O father Theodosius, intercede with Christ our God to save our souls.

We venerate the star of all the Slav lands today, rising in the East and traveling West. The blessed Theodosius radiated miracles and holiness by his goodness and monastic piety.

In those days, Philip went down to the town of Samaria and there proclaimed the Messiah. Without exception, the crowds that heard Philip and saw the miracles he performed attended closely to what he had to say. There were many who had unclean spirits, which came out shrieking loudly. Many others were paralytics or cripples, and these were cured. The rejoicing in that town rose to fever pitch.

A certain man named Simon had been practicing magic in the town and holding the Samaritans spellbound. He passed himself off as someone of great importance. People from every rank of society were paying attention to him. “He is the power of the great God,” they said. Those who followed him had been under the spell of his magic over a long period; but once they began to believe in the good news that Philip preached about the kingdom of God and the name of Jesus Christ, men and women alike accepted baptism. Even Simon believed. He was baptized like the rest and became a devoted follower of Philip. He watched the signs and the great miracles as they occurred, and was quite carried away.

When the apostles in Jerusalem heard that Samaria had accepted the word of God, they sent Peter and John to them. The two went down to these people and prayed that they might receive the Holy Spirit. It had not as yet come down upon any of them since they had only been baptized in the name of the Lord Jesus. The pair upon arriving imposed hands on them and they received the Holy Spirit.

At that time Jesus said to the people coming to him, “You should not be working for perishable food but for food that remains unto life eternal, food which the Son of Man will give you; it is on him that God the Father has set his seal.” At this they said to him, “What must we do to perform the works of God?” Jesus replied: “This is the work of God: have faith in the One whom he sent.”

They asked him, “So that we can put faith in you, what sign are you going to perform for us to see? What is the ‘work’ you do? Our ancestors had manna to eat in the desert; according to Scripture, ‘He gave them bread from heavens to eat.’”

Jesus said to them: “I solemnly assure you, it was not Moses who gave you bread from the heavens; it is my Father who gives the real heavenly bread. God’s bread comes down from heaven and gives life to the world.”