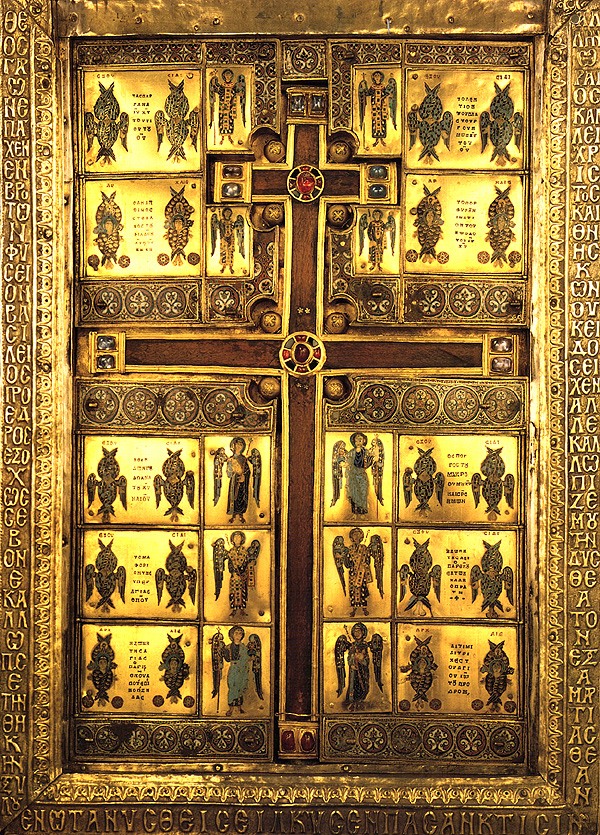 The Precious Cross appeared in the sky over Jerusalem on the morning of May 7 in the year 351 during the reign of the Emperor Constantius, who was a supporter of the Arian Heresy at the time. The luminous Cross stretched from Golgotha to the Mount of Olives (about five and half miles), and was as wide as it was long. It shone more brightly than the sun and many people gathered in the church to glorify Christ. This wondrous sign even led to the conversion of many pagans and Jews to Christianity. A letter from St. Cyril, who was patriarch of Jerusalem at the time, to the emperor describing the phenomenon and admonishing him to become Orthodox has been preserved. The vision of the Cross over Jerusalem strengthened the Orthodox faithful and contributed to the return of many Arians to the Church. It is also a reminder of the awesome Second Coming of Christ, when “the sign of the Son of man shall appear in heaven” (Matthew 24:30).

The sign of your cross appeared in a dazzling glow, more radiant than the sun. O Savior, You stretched it from the holy mountain to the place of Calvary, manifesting in this way the power You have given it. Preserve our civil authorities in strength and establish our country in peace, through the prayers of the Mother of God.

The pure and life-giving cross which opened paradise appeared in splendor over the earth and extended its dazzling rays to the heavens. Today, we the faithful accept its radiance as our guide to the Eternal Light. We bear it in our struggle as an assurance of victory and triumph.

In those days, Saul stayed some time with the disciples in Damascus, and soon began to proclaim in the synagogues that Jesus was the Son of God. Any who heard it were greatly taken aback. They kept saying: “Isn’t this the man who worked such havoc in Jerusalem among those who invoke this name? Did he not come here purposely to apprehend such people and bring them before the chief priests?”

Saul for his part grew steadily more powerful, and reduced the Jewish community of Damascus to silence with his proofs that this Jesus was the Messiah.

After quite some time had passed, certain Jews conspired to kill Saul, but their plot came to his attention. They went so far as to keep close watch on the city gates day and night in an attempt to do away with him. Some of his disciples, therefore, took him along the wall one night and lowered him to the ground, using ropes and a hamper. When he arrived back in Jerusalem he tried to join the disciples there; but it turned out they were all afraid of him. They even refused to believe that he was a disciple. Then Barnabas took him in charge and introduced him to the apostles. He explained to them how on his journey Saul had seen the Lord, who had conversed with him, and how Saul had been speaking out fearlessly in the name of Jesus at Damascus. Saul stayed on with them, moving freely about Jerusalem and expressing himself quite openly in the name of the Lord. He even addressed the Greek-speaking Jews and debated with them. They for their part responded by trying to kill him. When the brothers learned of this, some of them took him down to Caesarea and sent him off to Tarsus.

Meanwhile throughout all Judea, Galilee, and Samaria the church was at peace. It was being built up and was making steady progress in the fear of the Lord; at the same time it enjoyed the increased consolation of the Holy Spirit.

The Lord said to his disciples: “The command I give you is this, that you love one another. If you find that the world hates you, know that it has hated me before you. If you belonged to the world, it would love you as its own; the reason it hates you is that you do not belong to the world. Remember what I tod you: no slave is greater than his master. They will harry you as they harried me. They will respect your words as much as they respected mine. All this they will do to you because of my name, for they know nothing of him who sent me. If I had not come to them and spoken to them, they would not be guilty of sin; now, however their sin cannot be excused.

“To hate me is to hate my Father. Had I not performed such works among them as no one jas ever done before, they would not be guilty of sin; but as it is, they have seen, and they go on hating me and my Father. However, this only fulfills the text in their law: ‘They hated me without cause.’ When the Paraclete comes, the Spirit of truth who comes from the Father – and whom I myself will send from the Father – he will bear witness on my behalf. You must bear witness as well, for you have been with me from the beginning.