May 06 The Holy and Just Job the Long-suffering 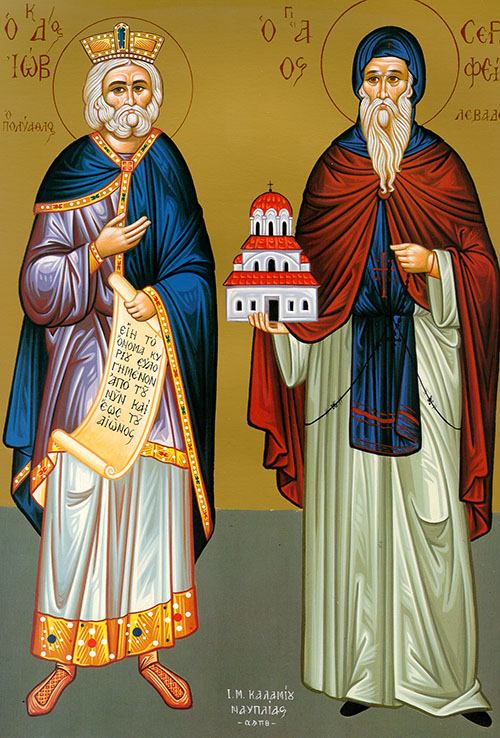 The righteous Job (whose name means “persecuted”), God’s faithful servant, was the perfect image of every virtue. The son of Zarah and Bossorha (Job 42), Job was a fifth-generation descendant of Abraham. He was a truthful, righteous, patient, and pious man who abstained from every evil thing. Job was very rich and blessed by God in all things, as was no other son of Ausis (his country, which lay between Idoumea and Arabia). However, divine condescension permitted him to be tested. Job lost his children, his wealth, his glory, and every consolation all at once. His entire body became a terrible wound covered with boils. Yet he remained steadfast and patient in the face of misfortune for seven years, always giving thanks to God. Later, God restored his former prosperity, and he had twice as much as before. Job lived for 170 years after his misfortune, completing his earthly life in 1350 BC at the age of 240.

When the enemy of the just beheld the treasures of Job’s virtues, he sought to destroy them. He attacked his body but could not touch his spirit, for his pure soul was well armed. As for us, the same enemy stripped us and chained us. Therefore, O Savior, be on our side, protect us against the devil and save us.

O faithful Job, celebrated servant of God, you were a deeply just man and God’s sincere worshiper. You gave the world a stirring lesson by your patience and long-suffering. Therefore, we sing a hymn of praise to your memory and we honor you.

In those days, Philip found himself at Azotus next, and he went about announcing the good news in all the towns until he reached Caesarea. Saul, still breathing murderous threats against the Lord’s disciples, went to the high priest and asked him for letters to the synagogues in Damascus which would empower him to arrest and bring to Jerusalem anyone he might find, man or woman, living according to the new way. As he traveled along and was approaching Damascus, a light from the sky suddenly flashed about him. He fell to the ground and at the same time heard a voice saying, “Saul, Saul, why do you persecute me?” “Who are you, sir?” Saul asked. The voice answered, “I am Jesus, the one you are persecuting. Get up and go into the city, where you will be told what to do.” The men who were traveling with Saul stood there speechless. They had heard the voice but could see no one. Saul got up from the ground unable to see, even though his eyes were open. They had to take him by the hand and lead him to Damascus. For three days he continued blind, during which time he neither ate nor drank.

There was a disciple in Damascus names Ananias to whom the Lord had appeared in a vision. “Ananias!” he said. “Here I am, Lord,” came the answer. The Lord said to him, “Go at once to Straight Street, and at the house of Judas ask for a certain Saul of Tarsus. He is there praying.” (Saul saw in a vision a man named Ananias coming to him and placing his hands on him so that he might recover his sight.) But Ananais protested: “Lord, I have heard from many sources about this man and all the harm he has done to your holy people in Jerusalem. He is here now with authorization from the chief priests to arrest any who invoke your name.” The Lord said to him: “You must go! This man is the instrument I have chosen to bring my name to the Gentiles and their kings and to the people of Israel. I myself shall indicate to him how much he will suffer for my name.” With that Ananais left. When he entered the house he laid his hands on Saul and said, “Saul, my brother, I have been sent by the Lord Jesus who appeared to you on the way here, to help you recover your sight and be filled with the Holy Spirit.” Immediately something like scales fell from his eyes and he regained his sight. He got up and was baptized, and his strength returned to him after he had taken food.

“Who are you, then?” they asked him. Jesus answered: “What I have been telling you from the beginning. I could say much about you in condemnation, but no, I only tell the world what I have heard from him, the truthful One who sent me.” They did not grasp that he was speaking to them of the Father. Jesus continued: “When you have lifted up the Son of Man you will come to realize that I AM and that I do nothing by myself. I say only what  the Father has taught me. He has not deserted me since I always do what pleases him.” Because he spoke this way, many came to believe in him.