May 14 The Holy Martyr Isidore 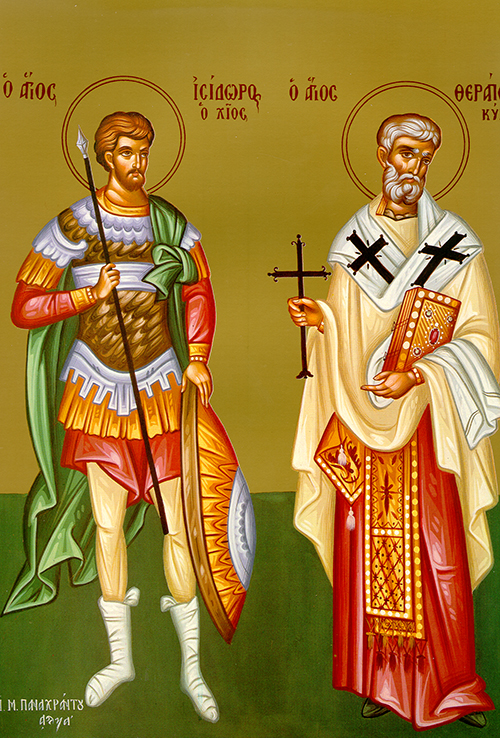 The holy martyr Isidore was an officer in the Roman Navy in the third century. Once it was discovered that he was a Christian, St. Isidore’s admiral urged him to renounce Christ and made sacrifice to the idol, be St. Isidore refused saying, “You may be able to kill my body, but you have no power over my soul. The true, living God, Jesus Christ, abides in me; even after my death he shall be with me, and I with Him. I shall abide in Him, and I shall never cease to confess Him while breath still remains in my body.” He was tortured after his refusal, and thrown in prison. His own father even tried to convince him to deny Christ, yet St. Isidore’s faith remained unshaken. Despite his tongue being cut out to prevent his proclamations, St. Isidore continued to confess Christ through his tortures until the point he was finally beheaded. His body was retrieved from the well where it was thrown by Saints Ammonios and Myrope, who buried him in secret with all due honor. St. Myrope was buried alongside St. Isidore on the Greek island of Chios.

O Lord our God, your holy martyr Isidore has deserved the crown of immortality on account of his good fight. Armed with your strength, he has vanquished his persecutors and crushed Satan’s dreadful might. Through his supplications, O Christ our God, save our souls.

O glorious Isidore, through your constant prayers to God, you became a leader in the world and a martyr holy in spirit. Therefore, we sing hymns of praise to you.

The Lord said to the people coming to him: “If you live according to my teachings, you are truly my disciples; then you will know the truth, and the truth will set you free.” They answered: “We are descendants of Abraham; never have we been slaves to anyone. What do you mean by saying, ‘You will be free?’”

Jesus answered them: “I give you my assurance, everyone who lives in sin is the slave of sin.  No slave has a permanent place in the family, but the son has a place there forever. That is why, if the son frees you, you will really be free. I realize you are of Abraham’s stock. Nonetheless, you are trying to kill me because my word finds no hearing among you. I tell what I have seen in the Father’s presence; you do what you have heard from your father.”

They retorted, “Our father is Abraham.” Jesus told them: “If you were Abraham’s children, you would be following Abraham’s example. The fact is, you are trying to kill me, a man who has told you the truth which I have heard from God. Abraham did nothing like that. Indeed you are doing your father’s works!”

They cried, “We are no illegitimate breed! We have but one father and that is God himself.” Jesus answered: “Were God your father you would love me, for I came from God, and here I am.”