May 13 The Holy Martyr Glyceria 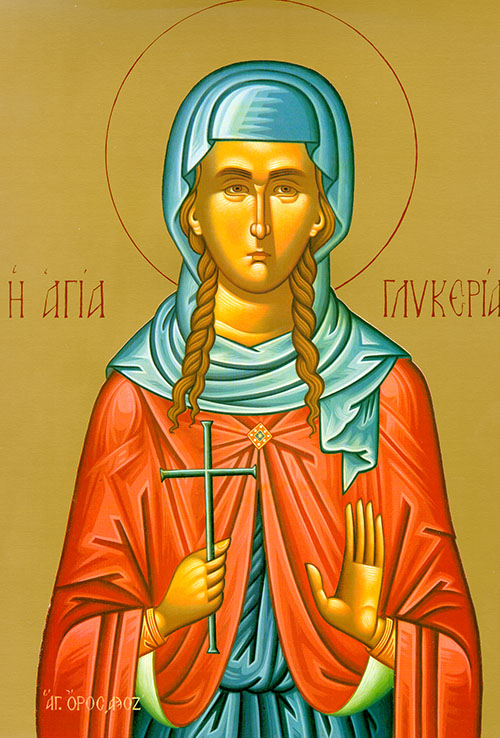 St. Glyceria was orphaned at an early age and became Christian. During the persecutions of Christians under the emperor Antoninus (138-161), an edict was issued that all Christians had to offer sacrifice to the idols. St. Glyceria was determined to suffer for Christ. On the appointed day, she drew a Sign of the Cross on her forehead and went to the pagan temple. When she removed her veil and revealed the Holy Cross, she prayed to God to bring the pagans to their senses, thunder rumbled and the idol statue crashed to the floor smashing to pieces. The pagan priests order Glyceria to be pelted with stones, but the thrown stones did not touch her. She was thrown into prison. When her tortures started the next day, an angel appeared and frightened the torturers who could not continue. Angels brought St. Glyceria food and drink while she was in prison. Attempts to torture her were thwarted by her incessant prayers and Angels of the Lord who came to heal her and protect her. St. Glyceria was sentenced to be eaten by wild beasts. She went to her execution with great joy, but the lioness meekly crawled up to the saint and lay at her feet. Finally, St. Glyceria prayed to the Lord, imploring that He take her unto Himself. In answer she heard a Voice from Heaven, summoning her to heavenly bliss. At that moment, another lioness was set loose upon the saint. It pounced upon the martyr and killed her, but did not tear her apart. Her body was retrieved and reverently buried by Christians in the year 177.

O Jesus, your lamb Glyceria cries out to You with great love: O Bridegroom, I long for You in great pain. I am crucified with You, and in baptism I am buried with You. I suffer for your sake in order to reign with You. I die for You in order to live in You. Accept me as an immaculate victim since I am immolated for your love. Through her intercession, O merciful One, save our souls.

O Glyceria, you loved the Virgin Mary, Mother of God and consecrated your virginity to Christ. Aflame with love for the Lord, you fought the good fight until death. For this, O martyred virgin, Christ our God crowns you with a double crown.

In those days, Peter had not finished these words when the Holy Spirit descended upon all who were listening to Peter’s message. The circumcised believers who had accompanied Peter were surprised that the gift of the Holy Spirit should have been poured out on the Gentiles also, whom they could hear speaking in tongues and glorifying God. Peter put the question at that point, “What can stop these people who have received the Holy Spirit, even as we have, from being baptized with water?” So he gave orders that they be baptized in the name of Jesus Christ. After this was done, they asked him to stay with them for a few days.

All through Judea the apostles and the brothers heard that Gentiles, too, had accepted the word of God. As a result, when Peter went up to Jerusalem some among the circumcised took issue with him, saying, “You entered the house of uncircumcised men and ate with them.” Peter then explained the whole affair to them step by step from the beginning: “I was at prayer in the city of Joppa when, in a trance, I saw a vision. An object like a big canvas came down; it was lowered down to me from the sky by its four corners. As I stared at it I could make out four-legged creatures of the earth, wild beasts, and reptiles, and birds of the sky. I listened as a voice said to me, ‘Get up, Peter! Slaughter, then eat.’ I replied: ‘Not for a moment, sir! Nothing unclean or impure has ever entered my mouth!’ A second time the voice from the heavens spoke out: ‘What God has purified you are not to call unclean.’ This happened three times; then the canvas with everything in it was drawn up again into the sky.”

“ Who are you, then?” they asked him. Jesus answered: “What I have been telling you from the beginning. I could say much about you in condemnation, but no, I only tell the world what I have heard from him, the truthful One who sent me.” They did not grasp that he was speaking to them of the Father. Jesus continued: “When you have lifted up the Son of Man he will come to realize that I AM and that I do nothing by myself. I say only what the Father has taught me. The One who sent me is with me. He has not deserted me since I always do what pleases him.” Because he spoke this way, many came to believe in him.