May 15 Our Venerable Father Pachomius the Great 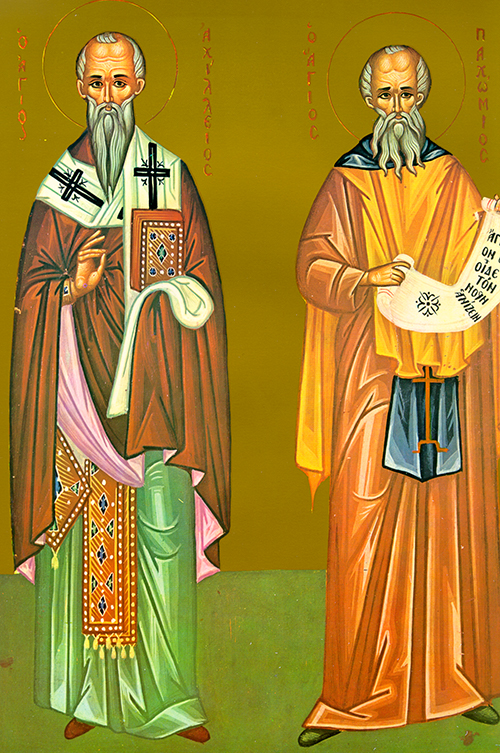 Our venerable father Pachomius the Great was a soldier in Thebaid (Upper Egypt) in the fourth century. After watching Christians feed and care for his fellow soldiers because they loved their God and wanted to fulfill His commandment to love their neighbor, St. Pachomius converted to Christianity. After his baptism, St. Pachomius led a strict ascetic life. He turned to hermit Palaemon for spiritual guidance, and received his monastic tonsure from him. After wandering in the desert, St. Pachomius heard a Voice from heaven instructing him to settle there and build a monastery. His monastery attracted many followers, and eventually there were 7 monasteries with St. Pachomius as Hegumen. His older brother came and joined him at the monastery, and his sister formed a women’s monastery across the Nile from her brothers.

Your abundant tears made the wilderness bloom, and your suffering made your labors fruitful a hundredfold; you became a shining torch over the world. O venerable father Pachomius, pray to Christ our God that He may save our souls.

You became a light for the ends of the earth. You peopled the desert with monks like a city. You weakened your body by your abstinence. You took up your cross and crucified yourself. Pray unceasingly for all of us.

In those days, those in the community who had been dispersed by the persecution that arose because of Stephen went as far as Pheonicia, Cyprus, and Antioch, making the message known to none but the Jews. However, some men of Cyprus and Cyrene among them who had come to Antioch began to talk even to the Greeks, announcing the good news of the Lord Jesus to them. The hand of the Lord was with them and a great number of them believed and were converted to the Lord. News of this eventually reached the ears of the church in Jerusalem, resulting in the sending of Barnabas to Antioch. On his arrival he rejoiced to see the evidence of the Lord, since he himself was a good man filled with the Holy Spirit and faith. Thereby large numbers were added to the Lord. Then Barnabas went off to Tarsus to look for Saul; once he had found him, he brought him back to Antioch. For a whole year they met with the church and instructed great numbers. It was in Antioch that the disciples were called Christians for the first.

At about that time, certain prophets came down from Jerusalem to Antioch. One of them named Agabus was inspired to stand up and proclaim that there was going to be a severe famine all over the world. (It did in fact occur while Claudius was emperor.) This made the disciples determined to set something aside, each according to his means, and send it to the relief of the brothers who lived in Judea. They did this, dispatching it to the presbyters in the care of Barnabas and Saul.

At that time, Jesus had to pass through Samaria, and his journey brought him to a Samaritan town named Shechem near the plot of land  which Jacob had given to his son Joseph. This was the site of Jacob’s well. Jesus, tired from his journey, sat down at the well.

The hour was about noon. When a Samaritan woman came to draw water, Jesus said to her, “Give me a drink.” His disciples had gone off to the town to buy provisions. The Samaritan woman said to him, “You are a Jew. How can you ask me, a Samaritan and a woman, for a drink?” Recall that Jews have nothing to do with Samaritans. Jesus replied: “If only you recognized God’s gift, and who it is that is asking you for a drink, you would have asked him instead, and he would have given you living water.”

“Sir,” she challenged him, “you do not have a bucket and this well is deep. Where do you expect to get this flowing water? Surely you do not pretend to be greater than our ancestor Jacob who gave us this well and drank from it with his sons and his flocks?” Jesus replied: “Everyone who drinks this water will be thirsty again. But whoever drinks the water I give him will never be thirsty; no, the water I give shall become a fountain within him, leaping up to provide eternal life.”

The woman said to him, “Give me this water, sir, so that I shall not grow thirsty and have to keep coming here to draw water.”

He said to her, “Go, call your husband, and then come back here.” “ I have no husband,” replied the woman. “You are right in saying you have no husband!” Jesus exclaimed. “The fact is, that you have had five, and the man you’re living with now is not your husband. What you said is true.“

“Sir,” answered the woman, “I see you are a prophet. Our ancestors worshiped on this mountain, but you people claim that Jerusalem is the place where men ought to worship God.” Jesus told her: “Believe me, woman, an hour is coming when you will worship the Father neither on this mountain nor in Jerusalem. You people worship what you do not understand, well we understand what we worship; after all, salvation is from the Jews. Yet an hour is coming, and is already here, when authentic worshipers will worship the Father in Spirit and truth. Indeed, it is just such worshipers the Father seeks. God is Spirit, and those who worship him must worship in Spirit and truth.”

The woman said to him: “I know there is a Messiah coming. (This term means Anointed.) “When he comes, he will tell us everything.” Jesus replied, “I who speak to you am he.”

His disciples, returning at this point, were surprised that Jesus was speaking with a woman. No one put a question, however, such as “What do you want of him?” Or “Why are you talking to her?” The woman then left her water jar and went off into the town. She said to the people: “Come and see someone who told me everything I ever did! Could this not be the Messiah?” And this they set out from the town to meet him.

Meanwhile the disciples were urging him, “Rabbi, eat something.” But he told them: “I have food to eat of which you do not know.” At this the disciple said to one another, “Do you suppose that someone has brought him something to eat?” Jesus explained to them: “Doing the will of him who sent me and bringing his work to completion is my food. Do you not have a saying: ‘Four months more and it will be harvest!’? Listen to what I say: Open your eyes and see! The fields are shining for harvest! The reaper already collects his wages and gathers a yield for eternal life, that sower and reaper may rejoice together. Here we have the saying verified: ‘One man sows; another reaps.’ I sent you to reap what you had not worked for. Others have done the labor, and you have come into their gain.”

Many Samaritans from that town believed him on the strength of the woman’s testimony: “He told me everything I ever did.” The result was that when the Samaritans came to him, they begged him to stay with them a while. So he stayed there two days, and through his own spoken word many more came to faith. As they told the woman: “No longer does our faith depend on your story. We have heard for ourselves, and we know that this really is the Savior of the world.”