May 21 The Holy Emperor Constantine and His Mother Helen, Equal to the Apostles 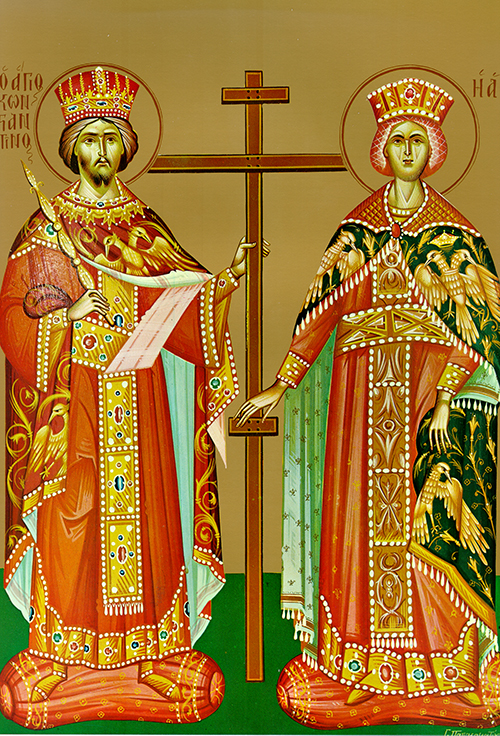 Constantine reigned in ancient Rome and in Byzantium (which became New Rome), and was the first Christian emperor and champion of the Faith. Though he was not baptized until on his deathbed, he considered himself a Christian, and called the First Ecumenical Council at Nicea in 325 to settle the Arian heresy.

On the Via Labicana in old Rome, Helen, the mother of emperor Constantine, is remembered. She single-mindedly worked to help the needy and piously visited churches, mingling with the crowds. Having made a pilgrimage to Jerusalem to see the places of the Nativity, Passion, and Resurrection of Christ, she honored the manger and cross of the Lord by building basilicas worthy of respect.

Seeing the cross in the sky like Paul, and like him you received a call from the Divine. You committed the royal city into the hands of the Lord. Save this city always in peace, O only Lover of Humankind, through the prayers of the Theotokos.

Today Constantine and his mother Helen reveal the cross, that most precious tree which puzzles the Jews. It is the armor of Christian authority against enemies. It has proved itself awesome in war by its many miracles.

In those days Agrippa spoke to Paul: “You have permission to state your case.” So Paul stretched out his hand and began his defense. “Many charges have been leveled against me by the Jews, King Agrippa. I count myself fortunate to be able to make my defense today in your presence, especially since you are expert in all the various Jewish customs and disputes. I beg you to listen to me patiently.

“The way I have lived since my youth, and the life I have led among my own people from the beginning and later at Jerusalem, is well known to all Jews. They have been acquainted with me for a long time and can testify if they wish, to my life lived as a Pharisee, the strictest sect of our religion.

“On one such occasion I was traveling toward Damascus armed with the authority and commission of the chief priests. On this journey, Your Majesty, I saw a light more brilliant than the sun shining in the sky at midday. It surrounded me and those who were traveling with me. All of us fell to the ground and I heard a voice saying to me in Hebrew, ‘Saul, Saul, why do you persecute me? It is hard for you to kick against the goad.’ I said, at that, ‘Who are you, sir?’ and the Lord answered: ‘I am that Jesus who you are persecuting. Get up now and stand on your feet. I have appeared to you to designate you as my servant and as a witness to what you have seen of me and what you will see of me.

‘I have delivered you from this people and from the nations, to open the eyes of those to whom I am sending you, to turn them from darkness to light and from the dominion of Satan to God; that through their faith in me they may obtain the forgiveness of their sins and a portion among God’s people.’

“King Agrippa, I could not disobey that heavenly vision. I preached a message of reform and of conversion to God, first to the people of Damascus, then to the people of Jerusalem and all the country of Judea; yes, even to the Gentiles. I urged them to act in conformity with their change of heart.”

The Lord said, “Truly I assure you: whoever does not enter the sheepfold through the gate but climbs in some other way is a thief and a marauder. The one who enters through the gate is shepherd of the sheep; the keeper opens the gate for him. The sheep hear his voice as he calls his own by name and leads them out. When he has brought out those that are his, he walks in front of them, and the sheep follow him because they recognize his voice. They will not follow a stranger; such a one they will flee, because they do not recognize a stranger’s voice.”

In those days, Paul and Barnabas continued in Antioch, along with many others, teaching and preaching the word of the Lord. After a certain time Paul said to Barnabas, “Let us go back now and see how the brothers are getting on in each of their towns where we proclaimed the word of the Lord.” Barnabas wanted to take along John, called Mark. But Paul insisted that, as Mark had deserted them at Pamphylia, refusing to join them on that mission, he was not fit to be taken along now. The disagreement which ensued was so sharp that the two separated. Barnabas took Mark along with him and sailed for Cyprus.

Paul, for his part, chose Silas to accompany him on his journey, and in this he was commended by the brothers to the favor of the Lord. He traveled throughout Syria and Cilicia, giving the churches there renewed assurance.

The Lord said to the people coming to him: “My sheep hear my voice. I know them, and they follow me. I give them eternal life, and they shall never perish. No one shall snatch them out of my hand. My Father is greater than all, in what he has given me, and there is no snatching out of his hand. The Father and I are one.”

When some of the Jews again reached for rocks to stone him, Jesus protested to them, “Many good deeds have I shown you from the Father. For which of these do you stone me?” The Jews retorted, “It is not for any ‘good deed’ that we are stoning you, but for the blaspheming. You who are only a man are making yourself God.”

Jesus answered: “Is it not written in your law, ‘I have said, You are gods?’ If it calls those men gods to whom God’s word was addressed –and Scripture cannot lose its force– do you claim that I blasphemed when, as he whom the Father consecrated and sent into the world, I said, ‘I am God’s Son?’ If I do not perform my Father’s works, put no faith in me. But if I do perform them, even though you put no faith in me, out faith in these works, so as to realize what it means that the Father is in me and I in him.”