May 22 The Holy Martyr Basiliscus 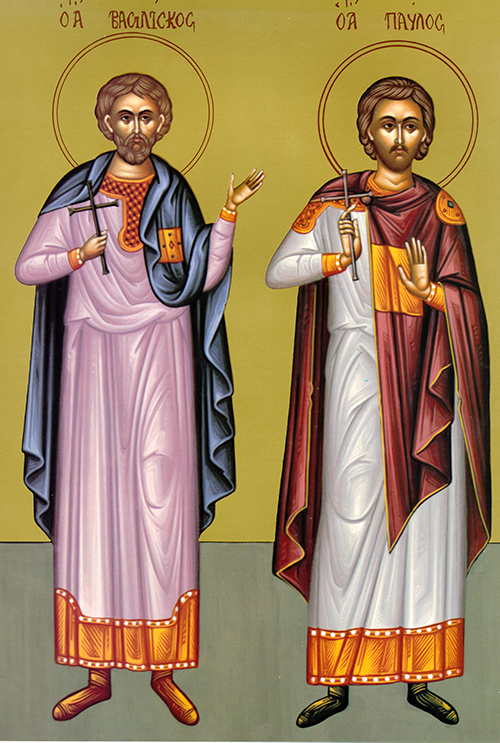 The holy martyr Basiliscus was a soldier and a cousin of St. Theodore the Recruit. Through his preaching and example, St. Basiliscus brought many to the Faith. He suffered greatly for the sake of Christ. His two brothers suffered with him and were crucified before he was sent to Prison in Comana where he met his martyrdom by beheading in the year 308.

O Lord our God, your holy martyr Basiliscus has deserved the crown of immortality on account of his good fight. Armed with your strength, he has vanquished his persecutors and crushed Satan’s dreadful might. Through his supplications, O Christ our God, save our souls.

You stood firmly with fortitude in your sufferings. You astonish us with your wonderful miracles which promote the name of Christ among us. You shamed the devil and so we venerate you, calling out: Rejoice, O Basiliscus, dearest and most brilliant of martyrs.

In those days, while Paul and Luke were on their way to the place of prayer, they met a slave girl who had a clairvoyant spirit. She used to bring substantial profit to her masters by fortunetelling. The girl began to follow Paul and the rest of them shouting, “These men are servants of the Most High God; they will make known to you a way of salvation.” She did this for several days until finally Paul became annoyed, turned around, and said to the spirit, “In the name of Jesus Christ I command you, come out of her!” Then and there the spirit left her.

When her masters saw that their source of profit was gone, they seized Paul and Silas and dragged them into the main square before the local authorities. They turned them over to the magistrates with this complaint: “These men are agitators disturbing the peace of our city! Furthermore, they are Jews, which means they advocate customs which are not lawful for us Romans to adopt or practice.” The crowd joined the attack on them, and the magistrates stripped them and ordered them to be flogged. After receiving many lashes they were thrown into prison, and the jailer was given instructions to guard them well. Upon receipt of these instructions he put them in maximum-security, going so far as to chain their feet to a stake.

About midnight, while Paul and Silas were praying and singing hymns to God as their fellow prisoners listened, a severe earthquake suddenly shook the place, rocking the prison to its foundations. Immediately all the doors flew open and everyone’s chains were pulled loose. The jailer woke up to see the prison gates wide open. Thinking that the prisoners had escaped, he drew his sword to kill himself; but Paul shouted to him, “Do not harm yourself! We are all still here.” The jailer called for a light, then rushed in and fell trembling at the seat of Paul and Silas. After a brief interval he let them out and said, “Men, what must I do to be saved?” Their answer was, “Believe in the Lord Jesus and you will be saved, and all your household.” They proceeded to announce the word of God to him and to everyone in his house. At that late hour of the night he took them in and bathed their wounds; then he and his whole household were baptized. He led them up into his house, spread a table before them, and joyfully celebrated with his whole family his newfound faith in God.

At the time, as Jesus walked along, he saw a man who had been blind from birth. His disciples asked Jesus, “Rabbi, was it his son or that of his parents that caused him to be born blind?” “Neither,” answered Jesus, “ It was no sin, either of this man or of his parents. Rather, it was to let God’s works show forth in him. We must do the deeds of him who sent me while it is day. The night comes on when no one can work. While I am in the world I am the light of the world.”

With that Jesus spat on the ground, made mus with his saliva, and smeared the man’s eyes with mud. Then he told him, “Go, wash in the pool of Siloam.” This name means, “One who has been sent.” So the man went off and washed, and came back able to see.

His neighbors and the people who had been accustomed to seeing him begging began to ask, “Isn’t this the fellow who used to sit and beg?” Somewhere claiming it was he; others maintained it was not but someone who looked like him. The man himself said, “I am the one.” They said to him then, “How were your eyes opened?” He answered, “That man they called Jesus made mud and smeared it on my eyes, telling me to go to Siloam and wash. When I did go and wash, I was able to see.” “Where is he?” they asked. He replied, “I have no idea.”

Next, they took the man who had been born blind to the Pharisees. Note that it was on a Sabbath that Jesus had made the mud pasted and opened his eyes. The Pharisees, in turn, began to inquire how he had recovered his sight. He told them, “He put mud on my eyes. I washed it off, and now I can see.” This prompted some of the Pharisees to assert, “This man cannot be from God because he does not keep the sabbath.” Others objected, “If a man is a sinner, how can he perform signs like these?” They were sharply divided over Jesus. Then they addressed the blind man again: “Since it was your eyes he opened, what do you have to say about him?” “He is a prophet,” he replied.

The Jews refused to believe that he had really been born blind and had begun to see, until they summoned the parents of this man who now could see. “Is this your son?” they asked, “and if so, do you attest that he was blind at birth? How do you account for the fact that now he can see?” The parents answered: “We know this is our son, and we know he was blind at birth. But how he can see now, or who opened his eyes, we have no idea. Ask him. He is old enough to speak for himself.” His parents answered in this fashion because they were afraid of the Jews, who had already agreed among themselves that anyone who acknowledged Jesus as the Messiah would be put out of the synagogue. That is why his parents said, “He is of age — ask him.”

A second time they summoned the man who had been born blind and said to him, “Give glory to God! First of all, we know this man is a sinner.” “I do not know whether he is a sinner or not,” he answered. “I know this much: I was blind before; now I can see.” They persisted: “Just what did he do to you? How did he open your eyes?” “I have told you once, but you would not listen to me,” he answered them. “Why do you want to hear it all over again? Do not tell me you want to become his disciples too?” The retorted scornfully: “You are the one who is that man’s disciple. We are disciples of Moses. We know that God spoke to Moses, but we have no idea where this man comes from.” The man came back at them: “Well, this is news! You do not know where he comes from, yet he opened my eyes. We know that God does not hear sinners, but that if someone is devout and obeys his well, he listens to him. It is unheard of that anyone ever gave sight to a person blind from birth. If this man were not from God, he could never have done such a thing.” “What!” they exclaimed, “You are steeped in sin from your birth, and you are giving us lectures? With that they threw him out bodily.

When Jesus heard of his expulsion, he sought the man out and asked him, “Do you believe in the Son of Man?” He answered, “Who is he, sir, that I may believe in him?” Jesus replied, “You have seen him, and he is speaking to you now.” “I do believe, Lord,” he said, and bowed down to worship him.