May 23 Our Holy Father and Confessor Michael, Bishop of Synnada 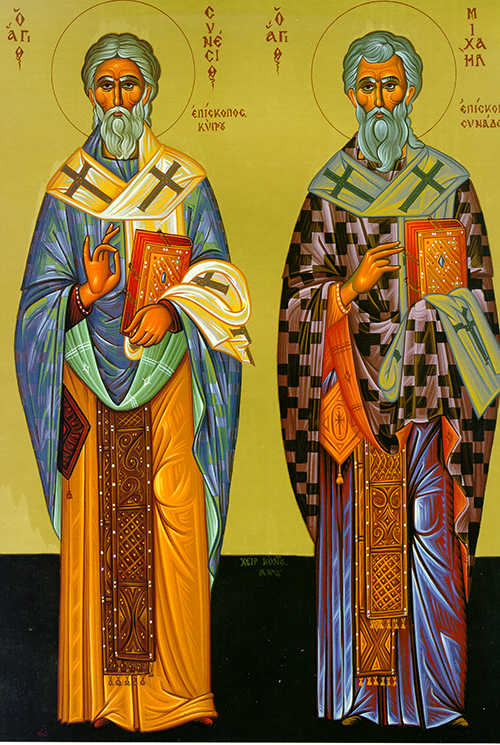 St. Michael the Confessor was a monk in a monastery on the coast of the Black Sea before the Patriarch Tarasius (784-806) consecrated him as Bishop of the city of Synnada. He was present at the Seventh Ecumenical Council at Nicea in 787. St. Michael bravely and openly opposed the iconoclast heresy of Leo the Armenian (813-820), and was banished to the city of Eudokiada, where he died in the year 821.

The sincerity of your deeds has revealed you to your people as a teacher of moderation, a model of faith, and an example of virtue. Therefore, you attained greatness through humility, and wealth through poverty. O father and archbishop Michael, ask Christ our God to save our souls.

As a dear prelate and a holy martyred priest, you did not fear the threats of the evil one. You fought heretical forces by proclaiming: I reverence the icon of Christ and that of his most pure Mother. For this we honor you, O Michael.

In those days, Paul and Silas took the road through Amphipolis and Apollonia and came to Thessalonica, where there was a Jewish synagogue. Following his usual custom, Paul joined the people there and conducted discussions with them about Scripture for three sabbaths. He explained many things, showing that the Messiah had to suffer and rise from the dead: “This Jesus I am telling you about is the Messiah!” Some of the Jews were convinced and threw their lot in with Paul and Silas. So, too, did a great number of Greeks sympathetic to Judaism, and numerous prominent women.

This only aroused the resentment of the Jews, however, who engaged loafers from the public square to form a mob and start a riot in the town. They marched on the house of Jason in an attempt to bring Paul and Silas before the people’s assembly. When they could not find them there, they dragged Jason himself and some of the brothers to the town magistrates, shouting: “These men have been creating a disturbance all over the place. Now they come here and Jason has taken them in. To a man, they disregard the Emperor’s decrees and claim instead that a certain Jesus is king.” In this way they stirred up the crowd. When the town’s magistrates heard the whole story, they released Jason and the others on bail.

At that time, the chief priests and the Pharisees called a meeting of the Sanhedrin against Jesus. They said, “What are we to do with this man performing all sorts of signs? If we let him go on like this, the whole world will believe in him. Then the Romans will come in and sweep away our sanctuary and out nation.” One of their number named Caiaphas, who was a high priest that year, addressed them at this point: “You have no understanding whatever! Can you not see that it is better for you to have one man die for the people than to have the whole nation destroyed?” He did not say this on his own. It was rather as high priest for that year that he prophesied that Jesus would die for the nation – and not this nation only, but to gather into one all the dispersed children of God.

From that day onward there was a plan afoot to kill Jesus. In consequence, Jesus no longer moved about freely in Jewish circles. He withdrew instead to a town called Ephriam in the region near the desert, where he stayed with his disciples.