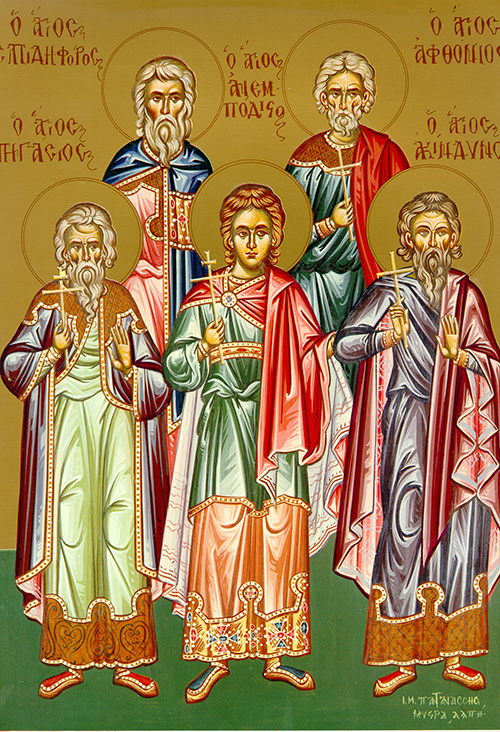 The holy martyrs Akindynos, Pegasius, Apthonius, Elpidiphor, and Anempodistus, and very many companions in Persia were martyred under the emperor Licinius and suffered under King Shapur II. The first three were servants at the court of King Shapur II but secretly served Christ their Lord. When they were accused and brought to trial before the king, he asked them where they came from. To this they replied: “Our fatherland and our life is the Most-holy Trinity, One in Essence and undivided, the Father, the Son, and the Holy Spirit, One God.” Elpidiphor was one of the king’s nobles. When he revealed that he was a Christian and denounced the king for his slaughter of innocent Christians, the king condemned him to death and Elpidiphor was beheaded along with seven thousand other Christians in the year 335.

O passion-bearers of the Lord, blessed is the earth which has drunk your blood, and holy are the tombs which have received your bodies. In the furnace you conquered the foe and preached Christ. Intercede with the gracious Lord to save our souls.

The pious and God-bearing martyrs, who gave up all things on earth – Akindynos, Pegasius and Anempodistus, and with them Apthonius and Elpidiphorus – you delightfully received good things of God and into rest, O You Who alone are all-good.

Brothers and sisters: Whatever you do, whether in speech or in action, do it in the name of the Lord Jesus. Give thanks to God the Father through him.

You who are wives, be submissive to your husbands. Avoid any bitterness toward them. You children, obey your parents in everything as the acceptable way in the Lord. And fathers, do not nag your children lest they lose heart.

To slaves I say, obey your human masters perfectly, not with the purpose of attracting attention and pleasing men but in all sincerity and out of reverence for the Lord. Whatever you do, work at it with your whole being. Do it for the Lord rather than for men, since you know full well you will receive an Inheritance from him as your reward. Be slaves of Christ the Lord. Whoever acts unjustly will be repaid for the wrong he has done. No favoritism will be shown. You slave-owners, deal justly and fairly with your slaves, realizing that you too have a master in heaven.

The Lord said: “Woe to you Pharisees! You pay tithes on mint and rue and all the garden plants, while neglecting justice and the love of God. These are the things you should practice, without omitting the others. Woe to you Pharisees! You love the front seats in synagogues and marks of respect in public. Woe to you! You are like hidden tombs over which men walk unawares.” In reply one of the lawyers said to Jesus, “Teacher, in speaking this way you insult us too.” Jesus answered: “Woe to you lawyers also! You lay impossible burdens on men but will not lift a finger to lighten them.”