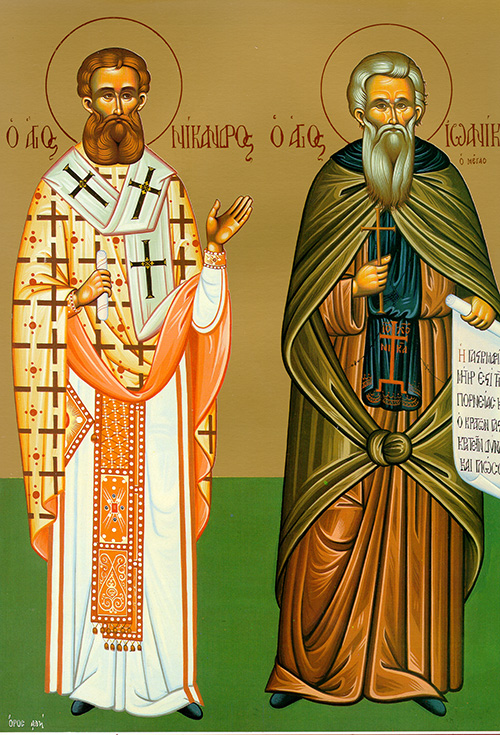 Our venerable father Joannicus the Great left the military after more than twenty years in arms to live as a monk and pursue solitary life in different forests of Mt. Olympus. He was accustomed to end his prayer with these words: “God my hope, Christ my refuge, Holy Spirit my protector. He fell asleep in the Lord in the coenobium of the Antidium in Bithynia in the year 846.

The holy martyr Nicander, bishop of Myra, and the priest Hermas were both ordained by the Apostle Titus. They were distinguished by a great zeal for the Faith and for their great labors in winning pagans for Christ. Because of this, they were tortured in various ways and eventually were buried alive during the first century.

You fought like a brave soldier against the hostile flesh, and you battled spiritual enemies by deep fasting. You vanquished legions of devils by humility and in the end have shown yourself a great conqueror. You received power to work wonders from God. O venerable Joannicus, now pray to Him to save our souls.

You became a brilliant star over the earth, guiding those in the fog of passions. You became the mightiest physician, for you received the grace to heal. Grant the grace of healing to us who petition you, that we may ever sing to you: Rejoice, O Father Joannicus.

You were enlightened with the anointing of truth, and you were illumined by the blood of martyrdom. With joy you have taken up your place among the angels, O glorious ones. Therefore, we celebrate your precious memory today O holy ones, praying to obtain purification through your prayers.

Brothers and sisters: Aristarchus, who is a prisoner along with me, sends you greetings. So does Mark, the cousin of Barnabas. You have received instructions about him: if he comes to you, make him welcome. Jesus known also as Justus sends greetings. These are the only circumcised ones among those who are working with me for the kingdom of God. They have been a great comfort to me. Epaphras, who is one of you, sends greetings. He is a servant of Christ Jesus who is always pleading earnestly in prayer that you stand firm, that you be perfect and have full conviction about whatever pertains to God’s will. I can certainly testify how solicitous he is for you and for those at Laodicea and Hierapolis. Luke, our dear physician, sends greetings. So does Demas.

Give our best wishes to the brothers at Laodicea and to Nymphas and the assembly that meets at his house. Once this letter has been read to you, see that it is read in the assembly of the Laodiceans as well, and that you yourselves read the letter that is coming from Laodicea. To Archippus say, “Take care to discharge the ministry you have received in the Lord.”

This greeting is from Paul – in my own hand! Remember my chains. Grace be with you.

The Lord said to his disciples: “There is nothing concealed that will not be revealed, nothing hidden that will not be made known. Everything you have said in the dark will be heard in the daylight; what you have whispered in locked rooms will be proclaimed from the rooftops. I say to you who are my friends: Do not be afraid of those who kill the body and can do no more. I will show you whom you ought to fear. Fear him who has power to cast into Gehenna after he has killed. Yes, I tell you, fear him. Are not five sparrows sold for a few pennies? Yet not one of them is neglected by God. In very truth, even the hairs of your head are counted! Fear nothing, then. You are worth more than a flock of sparrows.

“I tell you, whoever acknowledges me before men–the Son of Man will acknowledge him before the angels of God. But the man who has disowned me in the presence of men will be disowned in the presence of the angels of God. Anyone who speaks against the Son of Man will be forgiven, but whoever blasphemes the Holy Spirit will never be forgiven. When they bring you before synagogues, rulers and authorities, do not worry about how to defend yourselves or what to say. The Holy Spirit will teach you at that moment all that should be said.”