Nov. 13 Our Father among the saints, John Chrysostom, Archbishop of Constantinople 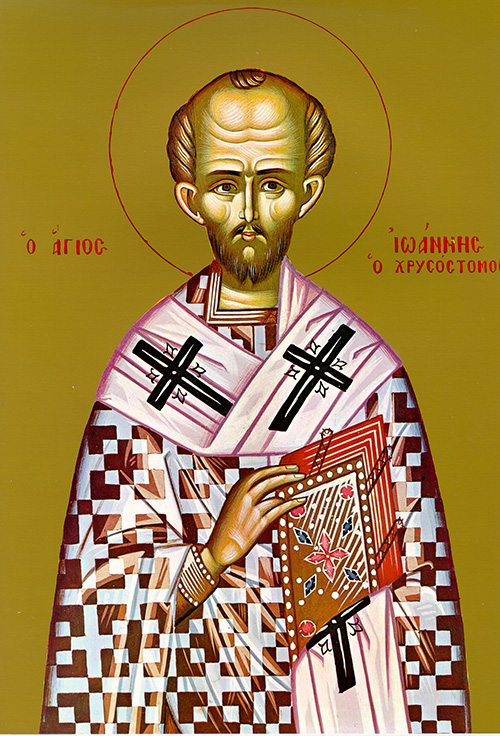 Our holy father John Chrysostom was born in Antioch, and was ordained to the priesthood and was found worthy of the title Chrysostom because of his golden eloquence. Chosen for the see of Constantinople, he showed himself to be the best pastor and teacher of the faith. He was forced into exile by his enemies. When he was recalled from his exile by a decree of Pope Innocent I, having suffered many evils from the accompanying soldiers, he returned his soul to God on the fourteenth of September in  Comana in Pontus in the year 407.

The grace shining forth from your mouth like a torch has enlightened the universe; it has stored up in the world the treasure of disdain for wealth. It has shown us the heights of humility. Instruct us by your words, John Chrysostom, our father, and intercede with the Word, Christ God, save our souls.

You have received divine grace from heaven and with your lips you teach all how to worship one God in the Trinity, most blessed venerable John Chrysostom. It is fitting that we praise you, for you are the teacher who reveals the divine.

Readings for the Father

Brothers and sisters: God is rich in mercy; because of his great love for us he brought us to life with Christ when we were dead in sin. By this favor you were saved. Both with and in Christ Jesus he raised us up and gave us a place in the heavens, that in the ages to come he might display the great wealth of his favor, manifested by his kindness to us in Christ Jesus. I repeat, it is owing to his favor that salvation is yours through faith. This is not your own doing, it is God’s gift; neither is it a reward for anything you have accomplished, so let no one pride himself on it. We are truly his handiwork, created in Christ Jesus to lead the life of good deeds which God prepared for us in advance.

At that time a lawyer stood up to pose this problem to Jesus: “Teacher, what must I do to inherit everlasting life?” Jesus answered him: “What is written in the law? How do you read it?” The lawyer replied: “You shall love the Lord your God with all your heart, with all your soul, with all your strength, and with all your mind; and your neighbor as yourself.”

Jesus said, “You have answered correctly. Do this and you shall live.” But because the lawyer wished to justify himself he said to Jesus, “And who is my neighbor?” Jesus replied, “There was a man going down from Jerusalem to Jericho who fell prey to robbers.

They stripped him, beat him, and then went off leaving him half-dead. A priest happened to be going down the same road; he saw him but continued on. Likewise there was a Levite who came the same way; he saw him and went on. But a Samaritan who was journeying along came on him and was moved to pity at the sight. He approached him and dressed his wounds, pouring in oil and wine. He then hoisted him on his own beast and brought him to an inn, where he cared for him. The next day he took out two silver pieces and gave them to the innkeeper with the request: ‘Look after him, and if there is any further expense I will repay you on my way back.’

“Which of these three, in your opinion, was neighbor to the man who fell in with the robbers?” The answer came, “The one who treated him with compassion.” Jesus said to the lawyer, “Then go and do the same.”