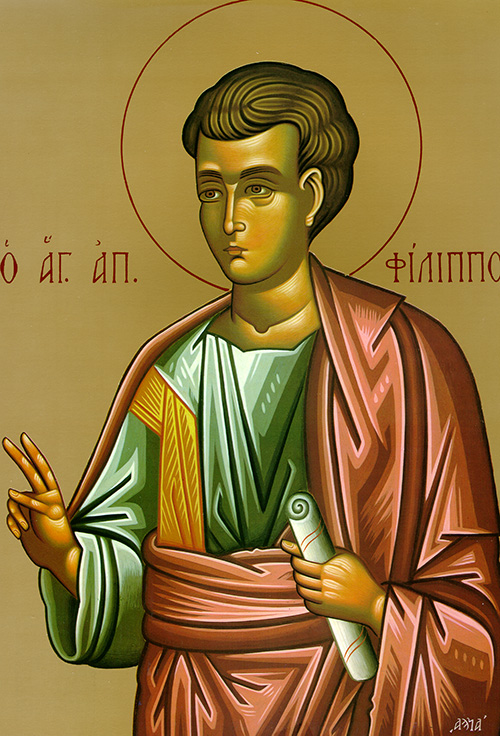 The holy and illustrious apostle Philip, like Peter and Andrew, was from Bethsaida in Galilee. He had become a disciple of John the Baptist, and was called by the Lord to follow him. He preached in Phrygia with John the Theologian and Bartholomew. Philip was crucified there upside down on a tree.

When our holy father Gregory Palamas, archbishop of Thessalonica, completed his secular studies, he withdrew to the Holy Mountain and became a monk of Vatopedi and then the Great Lavra. He was made Metropolitan of Salonica in 1347, and governed that church for twelve years. He is famous as both an ascetic and a theologian.

The whole world is adorned and Ethiopia sings for joy at her crown. She received light from you, and is adorned by your crown. O Philip, speaking in behalf of God, she solemnly celebrates your memory. You taught everyone to believe in Christ and you completed the course of the Gospel worthily. Therefore, Ethiopia has come to lift their hands to God. Pray to Him to grant us great mercy.

O Lord, Your disciple and friend and imitator of Your passion, Philip, has preached You as God to the universe. Through his prayers deliver Your Church from her lawless enemies, and through the Theotokos protect every city, O Most Merciful Christ.

Readings for the apostle

At that time Jesus wanted to set out for Galilee, but first he came upon Philip. “Follow me,” Jesus said to him. Now Philip was from Bethsaida, the same town as Andrew and Peter. Philip sought out Nathanael and told him, “We have found the one Moses spoke of in the law– the prophet too– Jesus, son of Joseph, from Nazareth.” Nathanael’s response to that was, “Can anything good come out of Nazareth?”  and Philip replied, “Come, see for yourself.” When Jesus saw Nathanael coming toward him, he remarked: “This man is a true Israelite. There is no guile in him.” “How do you know me?” Nathanael asked Jesus. “Before Philip called you,” Jesus answered, “I saw you under the fig tree.” “Rabbi,” said Nathanael, “you are the Son of God; you are the king of Israel.” Jesus responded: “Do you believe just because I told you I saw you under the fig tree? You will see much greater things than that.”

Jesus went on to tell them, “I solemnly assure you, you shall see the sky opened and the angels of God ascending and descending on the Son of Man.”

Brothers and sisters: You are our boast and our delight. That is why, when we could endure it no longer, we decided to remain alone at Athens and send you Timothy. He is our brother and God’s fellow worker in preaching the gospel of Christ, and so we sent him to strengthen and encourage you in regard to your faith lest any of you be shaken by these trials. You know well enough that such trials are our common lot. When we were still with you, we used to warn you that we would undergo trial; now it has happened, and you know what we meant. That is why I sent to find out about your faith when I could stand the suspense no longer, fearing that the tempter had put you to the test and all our labor might have gone for nothing. But no, brethren, since Timothy has returned to us from you reporting the good news of your faith and love, and telling us that you constantly remember us and are as desirous to see us as we are you, we have been much consoled by your faith throughout our distress and trial–so much so that we shall continue to flourish only if you stand firm in the Lord!

At that time Jesus came on a sabbath to eat a meal in the house of one of the leading Pharisees. Jesus said to the one who had invited him: “Whenever you give a lunch or dinner, do not invite your friends or brothers or relatives or wealthy neighbors. They might invite you in return and thus repay you. No, when you have a reception, invite beggars and the crippled, the lame and the blind. You should be pleased that they cannot repay you, got you will be repaid in the resurrection of the just.” At these words one in the party said to Jesus, “Happy is he who eats bread in the kingdom of God.”