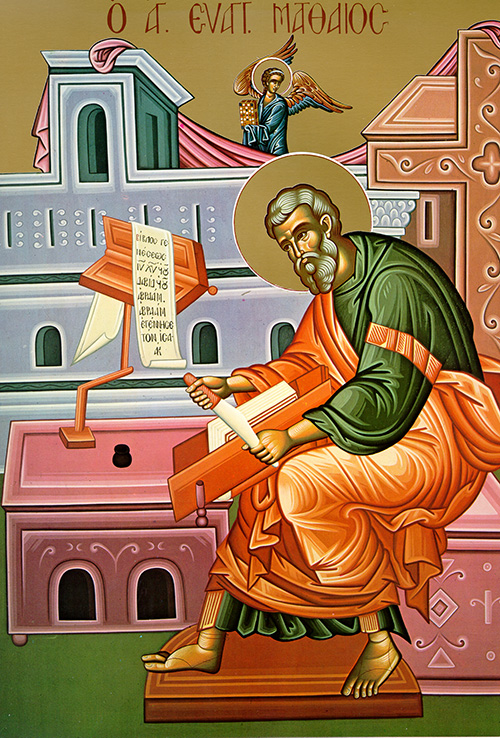 The holy apostle and evangelist Matthew who, named Levi, was called by Jesus to follow him and leave his job of publican or tax collector. Matthew, son of Alphaeus, was called by the Lord in Capernaum and said: “Follow Me.” After that, Matthew prepared a reception for the Lord in his home and thus provided the occasion for the Lord to express several great truths about His coming to earth. After receiving the Holy Spirit, Matthew preached the Gospel to the Parthians, Medes, and Ethiopians. In Ethiopia he appointed his follower Plato as bishop, and withdrew to prayerful solitude on a mountain. Matthew baptized the wife and son of the prince of Ethiopia, at which the prince became greatly enraged and dispatched a guard to bring Matthew to him for trial. The soldiers returned to the prince saying that they had heard Matthew’s voice, but could not see him with their eyes. The prince then sent a second guard. When this guard approached the apostle, he shone with a heavenly light so powerful that the soldiers could not look at him; filled with fear, they threw down their weapons and returned. Then the prince went himself. Matthew radiated such light that the prince was instantly blinded. However, the holy apostle had a compassionate heart. He prayed to God, and the prince was given back his sight. Unfortunately, he saw only with physical eyes and not spiritual eyes. Then the apostle prayed to God and gave up his spirit.

You rose from the tax collector’s booth and you followed Christ in all earnestness. He made you a blessing for all, a chosen apostle and evangelist for the world. Therefore, we honor your sacred memory and we ask you to beg God to forgive our sins.

You cast off the yoke of gathering taxes, and you put on the yoke of justice. You became a shrewd merchant, obtaining a wealth of wisdom from heaven itself. When you preached the word of truth, you lifted up depressed spirits. You wrote of the coming hour of judgment.

Readings for the apostle

Brothers and sisters, we beg and exhort you in the Lord Jesus that, even as you learned from us how to conduct yourselves in a way pleasing to God–which you are indeed doing–so must you learn to make still greater progress. You know the instructions we gave you in the Lord Jesus. It is God’s will that you grow in holiness: that you abstain from immorality, each of you guarding his member in sanctity and honor, not in passionate desire as do the Gentiles who know not God; and that each refrain from overreaching or cheating his brother in the matter at hand; for the Lord is an avenger of all such things, as we once indicated to you by our testimony. God has not called us to immorality but to holiness; hence, whoever rejects these instructions rejects not man, but God who sends his Holy Spirit upon you.

As regards brotherly love, there is no need for me to write you. God himself has taught you to love one another, and this you are doing with respect to all the brethren throughout Macedonia. Yet we exhort you to even greater progress, brethren. Make it a point of honor to remain at peace and attend to your own affairs. Work with your hands as we directed you to do, so that you will give good example to outsiders and want for nothing.

At that time the tax collectors and sinners were all gathering around to hear Jesus, at which the Pharisees and the scribes murmured, “This man welcomes sinners and eats with them.” Then Jesus addressed this parable to them: “Who among you, if he has a hundred sheep loses one of them, does not leave the ninety-nine in the wasteland and follow the lost one until he finds it? And when he finds it, he puts it on his shoulders in jubilation. Once arrived home, he invites friends and neighbors in and says to them, ‘Rejoice with me because I have found my lost sheep.’ I tell you, there will likewise be more joy in heaven over one repentant sinner than over ninety-nine righteous people who have no need to repent.

“What woman, if she has ten silver pieces and loses one, does not light a lamp and sweep the house in a diligent search until she has retrieved what she lost? And when she finds it, she calls her friends and neighbors to say, ‘Rejoice with me! I have found the silver piece I lost.’ I tell you, there will be the same kind of joy before the angels of God over one repentant sinner.”