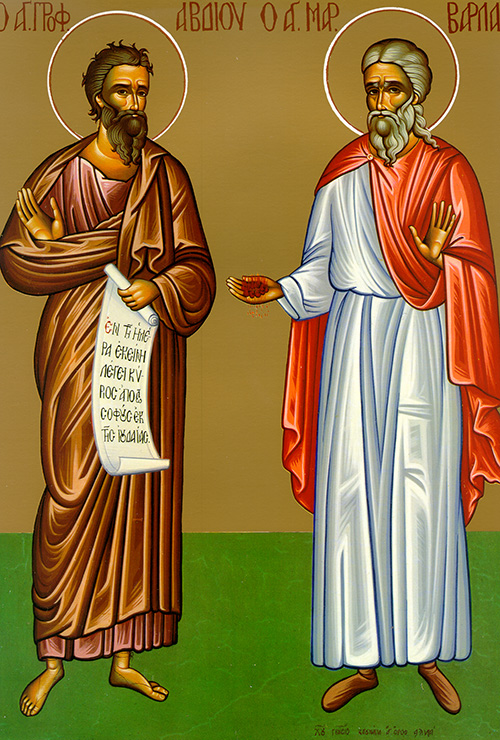 The holy Prophet Obadiah is the fourth of the Twelve Minor Prophets, and he lived during the 9th century B.C. He gave food and shelter to all the prophets of the Lord who were being hunted because of the queen’s quarrel with the Prophet Elias. He was part of the 3 detachments of soldiers sent to arrest Elias, but, through the prayers of the prophet, 2 of the detachments were consumed by heavenly fire. Obadiah and his detachment survived, he left military service, and received the gift of prophecy. he God-inspired work of the Prophet Obadiah is the fourth of the Books of the Twelve Minor Prophets in the Bible, and contains predictions about the future salvation of the Gentiles (Vs. 15) and that the Savior would come forth from Sion (Vs. 17).

The holy martyr Barlaam lived in Antioch of Syria. During Diocletian’s persecution against Christians, the aged saint confessed himself a Christian. The judge, wanting to compel the saint to renounce Christ, ordered St. Barlaam be brought before a pagan altar. His right hand was placed over it, and a red-hot censer burning with incense was put into his hand. The torturer thought that a weak old man could not endure the pain and would drop it on the altar. In this way Barlaam would involuntarily be offering sacrifice to the idol. However, the saint held onto the censer until his hand fell off. After this, the holy martyr Barlaam surrendered his soul to the Lord in the year 304.

As we celebrate the memory of your prophet Obadiah, O Lord, we implore You to save our souls through his prayers.

Your martyr Barlaam, O Lord our God, in his struggle received an incorruptible crown from You. With Your strength, he brought down the tyrants and broke the cowardly valor of demons. Through his prayers, O Christ our God, save our souls.

Receiving clarity of mind from divine illumination, the great Obadiah saw the future through the Holy Spirit. We piously and wisely keep his memory today, and venerate him to find light for our hearts.

You were revealed as a powerful fortress, for you offered a holocaust of yourself to Christ as an acceptable incense offering. You received a crown of honor, O Barlaam. Always pray for us, O sufferer.

Brothers and sisters: You must endure a little of my folly. Put up with me, I beg you! I am jealous of you with the jealousy of God himself, since I have given you in marriage to one husband, presenting you as a chaste virgin to Christ. My fear is that, just as the serpent seduced Eve by his cunning, your thoughts may be corrupted and you may fall away from your sincere and complete devotion to Christ. I say this because, when someone comes preaching another Jesus than the one we preached, or when you receive a different spirit than the one you have received, or a gospel other than the gospel you accepted, you seem yo endure it quite well. I consider myself inferior to the “super-apostles” in nothing. I may be unskilled in speech but I know that I am not lacking in knowledge. We have made this evident to you in every conceivable way.

At that time Jesus was journeying along, someone said to him, “I will be your follower wherever you go.” Jesus said to him, “The foxes have lairs, the birds of the sky have nests, but the Son of Man has nowhere to lay his head.” To another Jesus said, “Come after me.” The man replied, “Let me bury my father first.” Jesus said to him, “Let the dead bury their dead; come away and proclaim the kingdom of God.” Yet another said to him, “I will be your follower, Lord, but first let me take leave of my people at home.” Jesus answered him, “Whoever puts his hand to the plow but keeps looking back is unfit for the reign of God.”