Nov. 22 The Holy Apostle Philemon and his Companions; The Holy Martyrs Cecilia, Valerian, Tiburtius, and Maximus 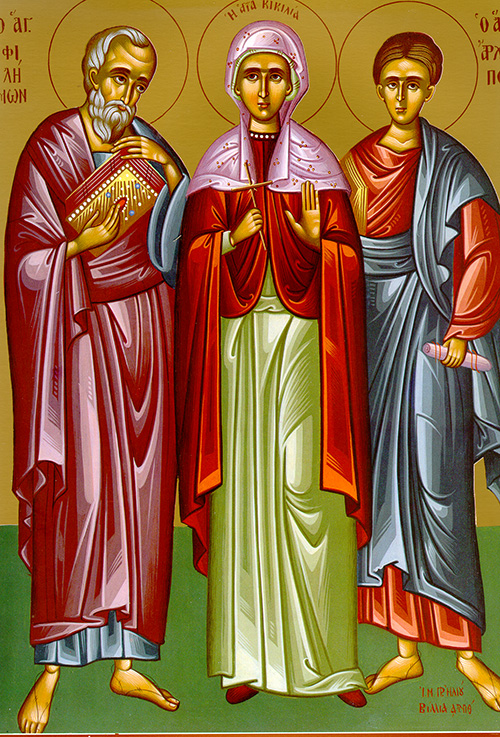 The Holy Apostles of the Seventy Philemon and his wife Apphia lived in the city of Colossa in Phrygia. After they were baptized by the holy Apostle Paul, they converted their house into a house of prayer, where all those who believed in Christ gathered and attended services. They devoted themselves to serving the sick and downcast. St. Philemon became bishop of the city of Gaza, and he preached the Word of God throughout Phrygia. Saints Philemon and Apphia, and also St. Archippus (who also lived at Colossa), all received the crown of martyrdom during the persecution of Nero (54-68). During a pagan festival an enraged crowd rushed into the Christian church when services were going on. All fled in terror, and only Saints Philemon, Archippus, and Apphia remained. They seized them and led them off to the city prefect. The crowd beat and stabbed St. Archippus with knives, and he died on the way to the court. Saints Philemon and Apphia were stoned to death by order of the prefect.

The holy martyrs Cecilia, Valerian, Tiburtius and Maximus: St. Cecilia, virgin and martyr, who it is said attained that double palm for the love of Christ at Rome in the cemetery of Callistus on the Appian Way. She was martyred after she buried with loving care the bodies of the martyrs Valerian, Tiburtius, and Maximus whom she led to Christ through her great devotion. (c. 230)

We praise the apostles of Christ as stars who bathe the ends of the world with light: the glorious Philemon, and the consecrated Archippus, and Onesimus, and Mark, and Appollos, and with them the all-wise Apphia, singing: pray unceasingly for all of us.

Brothers and sisters: We pray for you always that our God may make you worthy of his call, and fulfill by his power every honest intention and work of faith. In this way the name of our Lord Jesus may be glorified in you and you in him, in accord with the gracious gift of our God and of the Lord Jesus Christ.

On the question of the coming of our Lord Jesus Christ and our being gathered to him, we beg you, brethren, not to be so easily agitated or terrified, whether by an oracular utterance, or rumor, or a letter alleged to be ours, into believing that the day of the Lord is here.

“It will be like that on the day the Son of Man is revealed. On that day, if a man is on the rooftop and his belongings are in the house, he should not go down to get them; neither should the man in the field return home. Remember Lot’s wife. Whoever tries to preserve his life will lose it; whoever loses it will keep it. I tell you, on that night there will be two men in one bed; one will be taken and the other left. Two women will be grinding grain together; one will be taken and the other left.” “Where, Lord?” they asked him, and he answered, “Wherever the carcass is, there will the vultures gather. But when the Son of Man comes, will he find any faith on the earth?”