Nov. 21 Feast of the Entrance of the Theotokos into the Temple 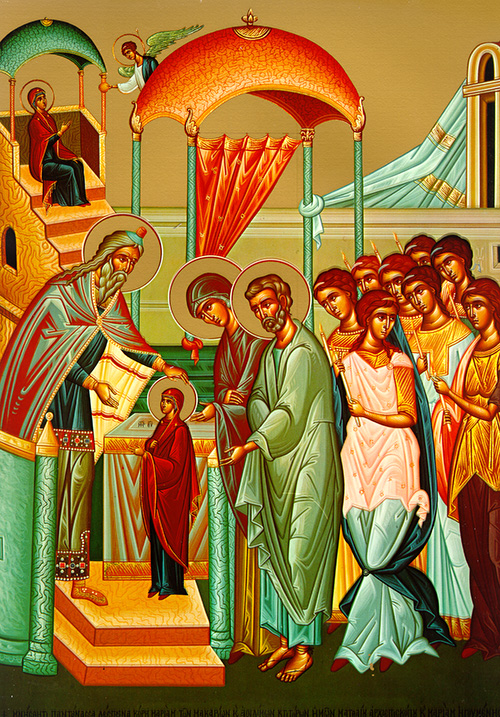 According to Holy Tradition, the parents of the Virgin Mary, Saints Joachim and Anna, praying for an end to their childlessness, vowed that if a child were born to them, they would dedicate it to the service of God. When the Most Holy Virgin reached the age of three, the holy parents decided to fulfill their vow. They gathered together their relatives and acquaintances, and dressed the All-Pure Virgin in Her finest clothes. Singing sacred songs and with lighted candles in their hands, virgins escorted Her to the Temple. After entrusting their child to the Heavenly Father, Joachim and Anna returned home. The All-Holy Virgin remained in the quarters for virgins near the Temple. The earthly life of the Most Holy Theotokos from Her infancy until She was taken up to Heaven is shrouded in deep mystery. Her life at the Jerusalem Temple was also a secret.

Today is the prelude of God’s benevolence and the herald of our salvation; for the Virgin openly appears in the temple of God and foretells Christ to all. Let us also with full voice exclaim to her: Rejoice, fulfillment of the Creator’s plan.

The most pure Temple of the Savior, the most precious Bridal Chamber and Virgin, the Treasury of the glory of God, is led today into the house of the Lord, bringing grace in the Spirit of God. God’s angels praise her in song; she is the Heavenly Ark.

It is no more than right that we thank God unceasingly for you, brothers, because your faith grows apace and your mutual love increases; so much so that in God’s communities we can boast of your constancy and your faith in persecution and trial. You endure these as an expression of God’s just judgment, in order to be found worthy of his kingdom – it is for his kingdom you suffer – even if strict justice would require that God visit hardships on those who visit them on you. He will provide relief to you who are sorely tried, as well as to us, when the Lord Jesus is revealed from heaven with his mighty angels; when, [as Scriptures say], “with flaming power he will inflict punishment on those who do not acknowledge God nor heed” the good news of our Lord Jesus. Such as these will suffer the penalty of eternal ruin apart from the presence of the Lord and the glory of his might on the Day when he comes, to be glorified in his holy ones and adored by all who have believed – for you already have our witness to you.

He said to the disciples: “A time will come when you will long to see one day of the Son of Man but will not see it. They will tell you he is to be found in this place or that. Do not go running about excitedly. The Son of Man in his day will be like the lightning that flashes from one end of the sky to the other. First, however, he must suffer much and be rejected by the present age.”