Oct. 1 The Protection of the Theotokos and Ever-Virgin Mary; The Holy Apostle Ananias; Our Venerable Father Romanus the Hymnographer 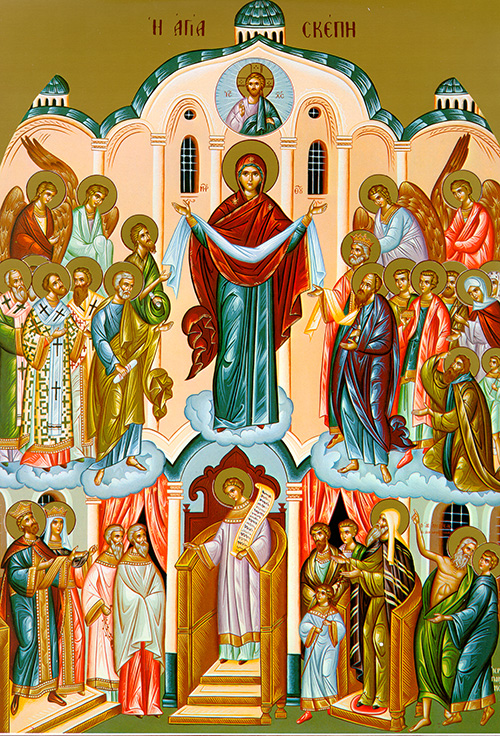 The Protection of the Theotokos: On Oct. 1, 911 during the reign of emperor Leo the Wise, there was an all-night vigil in the Blanchernae church of the Theotokos in Constantinople. Standing near the rear of the church was St. Andrew the Fool for Christ, and his disciple Epiphanius. At four o’clock in the morning, the Theotokos appeared above the people with a veil spread over her outstretched hands, as if to protect them. She was surrounded by angels and saints. Seeing this, Andrew asked his disciple, “Do you see the Queen and Lady of all is praying for the whole world?” Epiphanius answered, “I do see, holy Father, and I am in awe.”

The holy apostle Ananias was one of the Seventy Apostles and the first Bishop of Damascus. The Lord ordered him to restore the sight of Saul, the former persecutor of Christians, then baptized him (Acts 9:10-19, 22:12). Saul became the great preacher and Apostle Paul. St. Ananias boldly and openly confessed Christianity before the Jews and the pagans, despite the danger.

Our venerable father Romanus the Melodist was a deacon who inherited the name “the Melodist” from his sublime art in composing ecclesiastical hymns in honor of the Lord and the saints during the 5th century.

Troparion of the Theotokos

Protected by your appearance, O Theotokos; today, we devout people solemnly celebrate. Gazing upon your most pure icon, we fervently say: Protect us with your holy veil, and deliver us from all evil, imploring your Son, Christ our God, to save our souls.

Today the Virgin is present in the Church, and with the choirs of saints, invisibly prays to God for us. The angels rejoice with the prophets; because the Theotokos prays for us to the eternal God.

O holy Apostle Ananias, intercede with the merciful God that He may grant our souls forgiveness of sins.

In you, O father, the divine image was strictly preserved; taking up your cross, you followed Christ. You taught us by example how to spurn the flesh, for it passes away, and how to care for the soul, which is immortal. Therefore, O venerable Romanus, your soul rejoices with the angels.

In warmest prayers O Intercessor, and asking a speedy hearing, accept our prayers, O Ananias, and pray to Christ to have mercy on us, O unique one reposed among the saints.

You were adorned from childhood with the divine virtues of the spirit, O All-Wise Romanus, you were a precious adornment of the church of Christ. For you made it lovely with beautiful hymnody. Therefore we pray to you; Grant your divine gift to those who desire it. That we may cry out to you: Rejoice O All-blessed Father, beauty of the church.