Oct. 15 Our Venerable Father Euthymius the Younger; The Venerable Martyr Lucian, Priest of the Great Church of Antioch 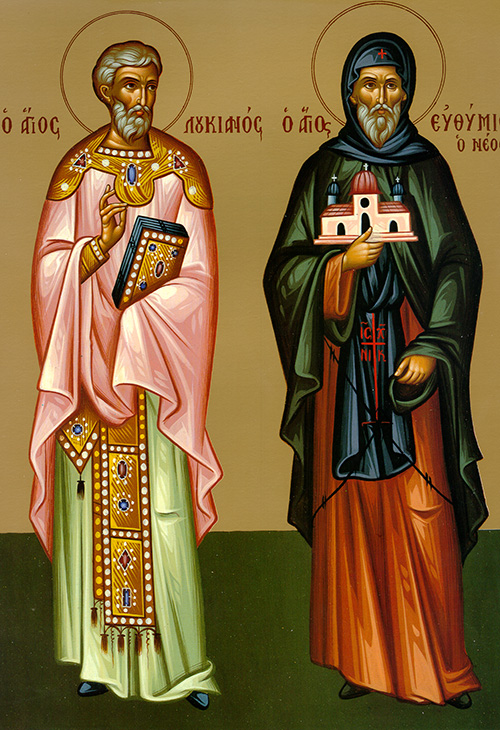 Our venerable father Euthymius the Younger was born in Ancyra in 824 to Christian parents. He served in the army, married, and had one daughter. He lived for a long time in the monasteries of Plympus and then on the Holy Mountain. He entered into his rest on Mount Athos during the 9th century, and his wonder-working relics are preserved in the city of Salonica.

In his youth, the venerable martyr Lucian, priest of the great city of Antioch, was given a very wide education. After giving away his goods to the poor, he fed himself with the work of his hands. He is responsible for the correction of the Hebrew text of the Holy Scriptures. In the persecution of the emperor Maximian in 312, he was thrown into prison and died a martyr’s death. St. John Chrysostom praised him highly for his love of the poor and of the ascetic life.

In you, O father, the divine image was strictly preserved; taking up your cross, you followed Christ. You taught us by example how to spurn the flesh, for it passes away, and how to care for the soul, which is immortal. Therefore, O venerable Euthymius, your soul rejoices with the angels.

You kept your self chaste by your fasting, O priest-martyr Lucian, O pride of Antioch, intercede with Christ God for us who keep your holy memory.

You walked through storms without getting wet, and with the arrows of your tears you slew the bodiless enemy. You received the grace to work miracles, Father Euthymius, and you heal all our passions. Pray without ceasing for us all.

We honor you with hymns of glory, O Lucian, the most radiant star. You first became illustrious by your detachment from the things of the world, then were lifted up by your struggles. Do not cease to intercede for all of us.

Brothers and sisters: Be steadfast and persevering, my beloved brothers, fully engaged in the work of the Lord. You know that your toil is not in vain when it is done in the Lord.

About the collection for the saints, follow the instructions I gave the churches of Galatia. On the first day of each week everyone should put aside whatever he has been able to save, so that the collection will not have to be taken up after I arrive. When I come I shall give letters of introduction to those whom you have chosen to take your gift to Jerusalem.

At that time on the sabbath Jesus was walking through the standing grain. His disciples were pulling off grain-heads, shelling them with their hands, and eating them. Some of the Pharisees asked, “Why are you doing what is prohibited on the sabbath?” Jesus said to them: “Have you not read what David did when he and his men were hungry–how he entered God’s house and took and ate the holy bread and gave it to his men, even though only priests are allowed to eat it?” Then he said to them, “The Son of Man is Lord even of the sabbath.”

On another sabbath Jesus came to teach in a synagogue where there was a man whose right hand was withered. The scribes and Pharisees were on the watch to see if he would perform a cure on the sabbath so that they could find a charge against him. He knew their thoughts, however, and said to the man whose hand was withered, “Get up and stand here in front.” The man rose and remained standing. Jesus said to them, “I ask you, is it lawful to do good on the sabbath–or evil? To preserve life–or destroy it?” He looked around at them all and said to the man, “Stretch out your hand.” The man did so and his hand was perfectly restored.