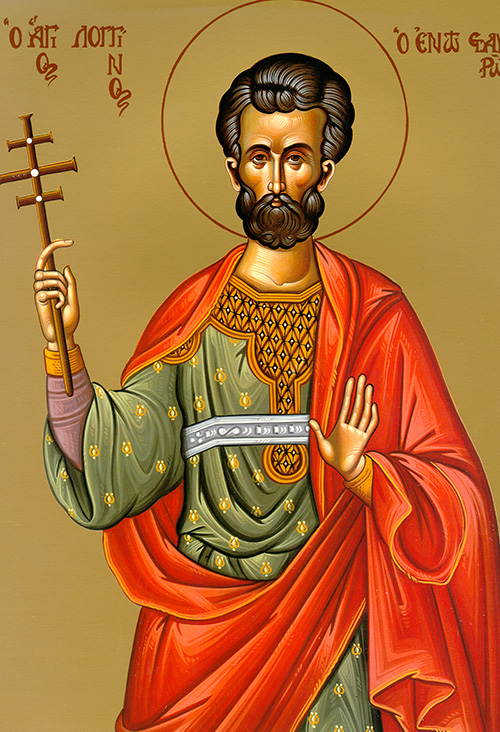 The holy martyr Longinus the Centurion, a Roman soldier, served in Judea under the command of the governor, Pontius Pilate. When our Savior Jesus Christ was crucified, it was the detachment of soldiers under the command of Longinus which stood watch on Golgotha, at the very foot of the holy Cross. Longinus and his soldiers were eyewitnesses of the final moments of the earthly life of the Lord, and of the great and awesome portents that appeared at His death. These events shook the centurion’s soul. Longinus believed in Christ and confessed before everyone, “Truly this was the Son of God” (Mt. 27:54). According to tradition, Longinus was the soldier who pierced the side of the Crucified Savior with a spear, and received healing from an eye affliction when blood and water poured forth from the wound.

Your martyr Longinus, O Lord our God, in his struggle received an incorruptible crown from You. With Your strength, he brought down the tyrants and broke the cowardly valor of demons. Through his prayers, O Christ our God, save our souls.

The Church greatly rejoices today in commemorating the courageous ever-memorable Longinus, and it cries out, “O Christ, You are my strength and my stronghold.”

Brothers and sisters: The God and Father of the Lord Jesus knows – blessed be he forever – that I do not lie. In Damascus the ethnarch of King Aretas was keeping a close watch on the city in order to arrest me, but I was lowered in a basket through a window in the wall and escaped his hands.

I must go on boasting, however useless it may be, and speak of the visions and revelations of the Lord. I know a man in Christ who, fourteen years ago, whether he was in or outside his body I cannot say, only God can say – a man who was snatched up to the third heaven. I know that this man – whether in or outside his body I do not know, God knows – was snatched up to Paradise to hear words which cannot be uttered, words which no man may speak. About this man I will boast; but I will do no boasting about myself unless it be about my weaknesses. And even if I were to boast it would not be folly in me because I would only be telling the truth.

But I refrain, lest anyone think more of me than what he sees in me or hears from my lips. As to the extraordinary revelations, in order that I might not become conceited I was given a thorn in the flesh, an angel of Satan to beat me and keep me from getting proud. Three times I begged the Lord that this might leave me. He said to me, “My grace is enough for you, for in weakness power reaches perfection.” And so I willingly boast of my weakness instead, that the power of Christ may rest upon me.

Brothers and sisters: Remember your leaders who spoke the word of God to you; consider how their lives ended, and imitate their faith. Jesus Christ is the same yesterday, today, and forever.

Do not be carried away by all kinds of strange teachings. It is good to have our hearts strengthened by the grace of God and not by foods which are useless to those who take them as a standard for living. We have an altar from which those who serve the tabernacle have no right to eat. The bodies of the animals whose blood is brought into the sanctuary by the high priest as a sin offering are burned outside the camp. Therefore Jesus died outside the gate, to sanctify the people by his own blood. Let us go to him outside the camp, bearing the insult which he bore. For here we have no lasting city; we are seeking one which is to come. Through him let us continually offer God a sacrifice of praise, that is, the fruit of lips which acknowledge his name. Do not neglect good deeds and generosity; God is pleased by sacrifices of that kind.

The Lord told this parable: “A farmer went out to sow some seed. In the sowing, some fell on the footpath where it was walked on and the birds of the air ate it up. Some fell on rocky ground, sprouted up, then withered through lack of moisture. Some fell among briars, and the thorns growing up with it stifled it. But some fell on good soil, grew up, and yielded grain a hundredfold.”

As he said this he exclaimed: “Let everyone who has ears attend to what he has heard.” His disciples began asking him what the meaning of his parable might be. He replied, “To you the mysteries of the reign of God have been confined, but to the rest of the parables that, ‘Seeing they may not perceive, and hearing that they may not understand.’

‘This is the meaning of the parable. The seed is the word of God. Those on the footpath are people who hear, but the devil comes and takes the word out of their hearts lest they believe and be saved. Those on rocky ground are the ones who, when they hear the word, receive it with joy. They have no root; they believe for a while, but fall away in time of temptation. The seed fallen among briars are those who hear, but their progress is stifled by the cares and riches and pleasures of life and they do not mature. The seed on good ground are those who hear the word in a spirit of openness, retain it, and bear fruit through perseverance.”

At that time Jesus looked up to heaven and said: “Father, the hour has come! Give glory to your Son that your Son may give glory to you, inasmuch as you have given him authority over all mankind, that he may bestow eternal life on those you gave him. Eternal life is this: to know you, the only true God, and him whom you have sent, Jesus Christ. I have given you glory on earth by finishing the work you gave me to do. Do you now, father, give me glory at your side, glory I had with you before the world began. I have made your name known to those you gave me out of the world. These men you gave me were yours; they have kept your word. Now they realize that all you gave me comes from you. I  entrusted to them the message you entrusted to me and they received it. They have known that in truth, I came from you, they have believed it was you who sent me.

“For these I pray–not for the world but for these you have given me, for they are really yours. Just as all that belongs to me is yours, so all that belongs to you is mine. It is in them that I have been glorified. I am in the world no more, but these are in the world as I come to you. Oh, father, most holy, protect them with your name would you have given me that they may be one, even as we are one. As long as I was with them, I guarded them with your name which you gave me. I kept careful watch, and not one of them was lost, none but him who was destined to be lost – in fulfillment of Scripture. Now, however, I come to you; I say all this while I am still in the world that they may share my joy completely.