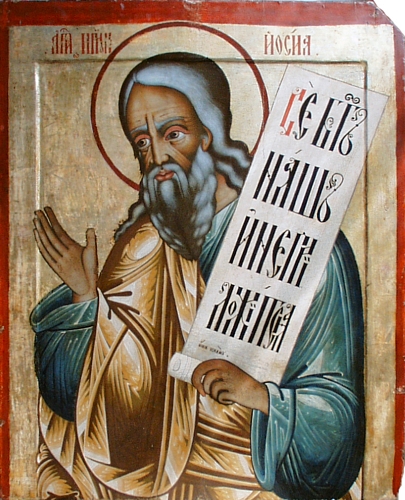 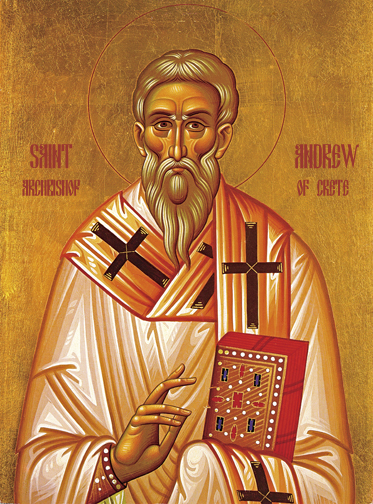 The holy prophet Hosea, who not only by his words but also by his manner of life showed the unfaithful people of Israel that the Lord was an ever-faithful Spouse, moved by limitless mercy.

The holy venerable martyr Andrew of Crete was a priest who defended the cult of the holy icons with great vigor during the persecution under the emperor Copronymus. He attacked the emperor publicly in church saying, “You would do better, O King, to look to the work of the army and the governing people, than to the persecuting of Christ and his servants.” He was attacked and killed by a man with an ax in 767.

As we celebrate the memory of Your prophet Hosea, O Lord, we implore You to save our souls through his prayers.

Trained in asceticism on the mountain, you were able to defeat the devil’s assaults by the power of the Cross, O all-blessed one. With great courage, you faced the battle and crushed the emperor Copronymus with the sword of faith. O glorious venerable martyr Andrew, God crowned you for your asceticism and your good fight.

With sure steps, you followed the commands of the Lord, and you were filled with the Holy Spirit, O prophet Hosea. You received the gift of prophecy and you spoke daringly to Israel, who sought a speedy coming of Christ. You converted those who strayed from the path of justice and set them on the road to the heavenly Jerusalem. Now you stand within that city and implore the Lord, praying without ceasing for us all.

Today Constantinople, Capital of the Byzantine Empire, celebrates the brightest feast of your light-bearing memory and calls all cities and countries to participate. It rejoices in that it holds a great treasure: your body which sustained so many struggles, O holy martyr Andrew, light of Orthodoxy!

My dearly beloved, obedient as always to my urging, work with anxious concern to achieve your salvation, not only when I happen to be with you but all the more now that I am absent. It is God who, in his good will toward you, begets in you any measure of desire or achievement. In everything you do, act without grumbling or arguing; prove yourself innocent and straightforward, children of God beyond reproach in the midst of a twisted and depraved generation – among whom you shine like the stars in the sky while holding fast to the word of life. As I look to the Day of Christ, you give me cause to boast that I did not run the race in vain or work to no purpose.

At that time Jesus went to pray in seclusion and his disciples were with him. He put this question to them, “Who do the crowds say that I am?” “John the Baptizer,” they replied, “and some say Elijah, while others claim that one of the prophets of old has returned from the dead.” Then Jesus asked them, “But you–who do you say that I am?” Peter said in reply, “The Messiah of God.” Jesus strictly forbade them to tell this to anyone. “The Son of Man,” he said, “must first endure many sufferings, be rejected by the elders, the high priests and the scribes, and be put to death, and then be raised up on the third day.”