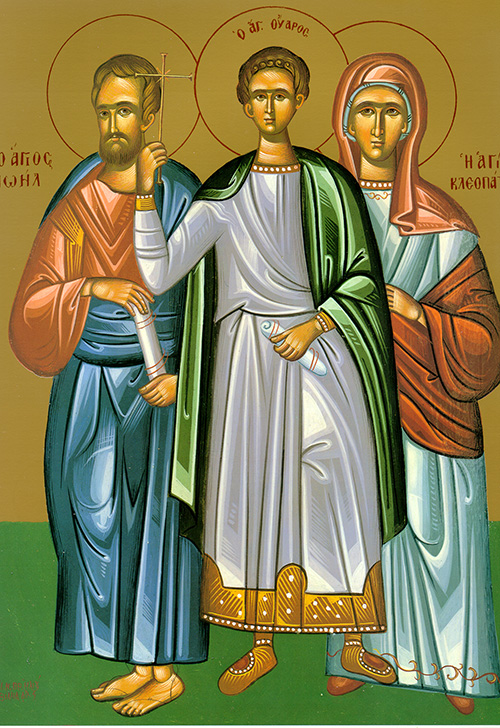 The holy prophet Joel announced the great day of the Lord and the mysterious pouring out of the Spirit on all flesh, which the divine majesty in Christ deemed fit to fulfill marvelously on the day of Pentecost.

The holy martyr Varus was a soldier, who, under Maximianus the emperor, visited and refreshed six holy hermits in a prison. When a seventh died in the wilderness, Varus wished to take his place and suffered cruel torments with them in Egypt in the year 307.

You knew beforehand of the coming of God in the flesh and the descent of the Holy Spirit. You announced the impending judgment, O prophet Joel. Through your prayers, save those who venerate you from all sorrow.

You saw the army of passion-bearers suffer according to the law, and showing courage, you sought to endure it as well. You longed to die for Christ, and you received the martyr’s crown from Him, O Varus. Therefore, pray for the salvation of our souls.

Having followed Christ, O Varus, you drank from His chalice. You received the crown of martyrdom and exult forever with the angels. Never cease to intercede before the Lord for our souls.

Brothers and sisters: I am confident in the Lord that I myself will be coming soon. I have decided, too, that I must send you Epaphroditus, my brother, co-worker, and comrade in arms, whom you sent to take care of my needs. He has been longing for all of you, and was distressed that you heard about his illness. He was, in fact, sick to the point of death, but God took pity on him; not just on him, I should say, but on me, too, so as to spare me one sorrow after another. I have been especially eager to send him so that you may renew your joy on seeing him, and my own anxieties may be lessened. Welcome him joyously in the Lord and hold me like him in esteem, for he came near to death for the sake of Christ’s work. He risked his life in an effort to render me those services you could not render.

The Lord said to his disciples, “Pay close attention to what I tell you: The Son of Man must be delivered into the hands of men.” The disciples failed, however, to understand the warning; its meaning was so concealed from them that they did not grasp it at all, and they were afraid to question him about the matter.

It was the disciple John who said, “Master, we saw a man using your name to expel demons, and we tried to stop him because he is not of our company.” Jesus told him in reply, “Do not stop him, for any man who is not against you is on your side.”