Oct. 26 The Holy and Glorious Great-Martyr Demetrius, Myroblyte and Wonderworker; Commemoration of the Great and Fearful Earthquake at Constantinople 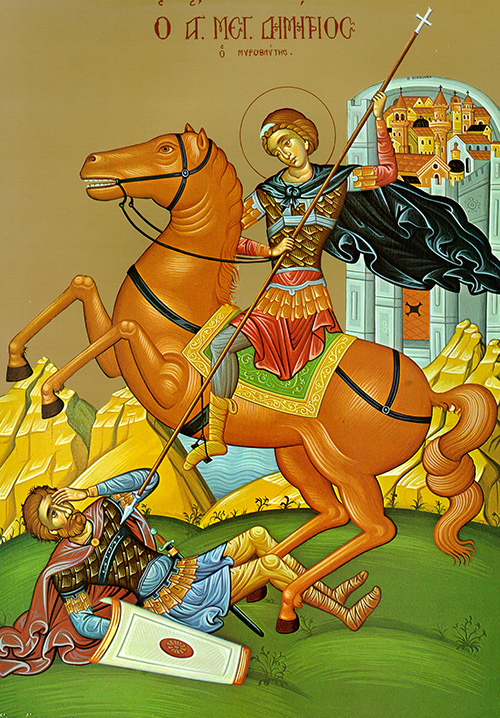 The holy and great martyr Demetrius was born in Salonica of devout parents, and was a much-longed-for only child. Because of this he received an excellent education. Like his father, Demetrius became a soldier in the Roman army. The emperor Maximian appointed him to persecute Christians in Salonica, but Demetrius confessed his faith and preached Christ. He was cruelly martyred for his witness to the Lord. Since the 7th century a miraculous flow of fragrant myrrh has been found beneath the burial place of St. Demetrius, so he is called “the Myrrh-gusher” or Myroblyte.

O Passion-bearer, the world has seen you as a defender of those imperiled and a conqueror of the nations. In cutting down the arrogance of Lyaeus, you bolstered Nestor by your courage. Therefore, O holy Demetrius, pray to Christ our God to grant us great mercy.

O Christ our God, who look upon the earth, and it quakes: deliver us from the dreadful menace of earthquakes, and send down upon us Your rich mercies through the intercession of the Theotokos and save us.

With streams of your blood, O Demetrius, the God, who gives you invincible might, has dyed the Church in purple, and keeps your city unharmed, for you are its foundation.

“To hate me is to hate my Father. Had I not performed such works among them as no one has ever done before, they would not be guilty of sin; bit as it is, they have seen, and they go on hating me and my Father. However, this only fulfills the text in their law: ‘They hated me without cause.’ When the Paraclete comes, the Spirit of truth who comes from the Father – and whom I myself will send from the Father – he will bear witness on my behalf. You must bear witness as well, for you have been with me from the beginning.

Brothers and sisters: It is [Christ] who is head of the body, the church; he who is the beginning, the first-born of the dead, so that primacy may be his in everything. It pleased God to make absolute fullness reside in him and, by means of him, to reconcile everything in his person, both on earth and in the heavens, making peace through the blood of his cross.

You yourselves were once alienated from him; you nourished hostility in your hearts because of your evil deeds. But now Christ has achieved reconciliation for you in his mortal body by dying, so as to present you to God holy, free of reproach and blame. But you must hold fast to faith, be firmly grounded and steadfast in it, unshaken in the hope promised you by the gospel you have heard. It is the gospel which has been announced to every creature under heaven, and I, Paul, am its servant.

The Lord said to his disciples: “Ask and you shall receive; seek and you shall find; knock and it shall be opened to you.’ For whoever asks, receives, whoever seeks, finds; whoever knocks, is admitted. What father among you will give his son a snake if he asks for a fish, or hand him a scorpion if he asks for an egg? If you, with all your sins, know how to give your children good things, how much more will the heavenly Father give the Holy Spirit to those who ask him.”