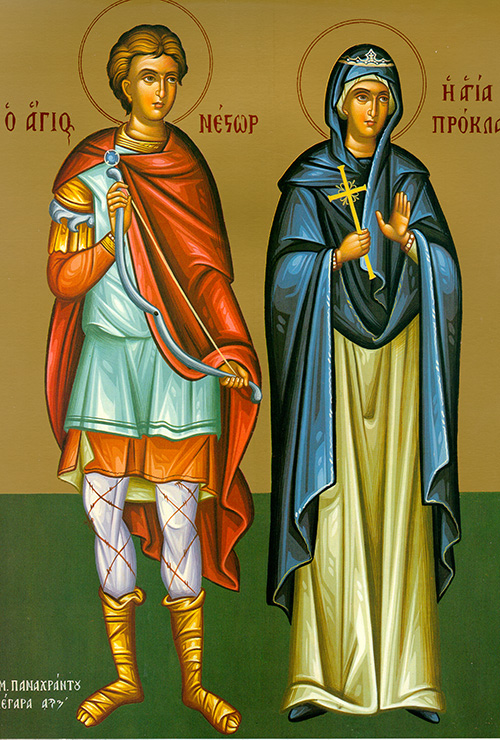 The holy martyr Nestor learned of Christianity from St. Demetrius the Great Martyr. Nestor was moved to defend Christians being tortured in the arena of Salonica, and defeated the brute gladiator who was killing the innocents. The emperor Maximian ordered Nestor to be beheaded in the year 306.

Capitolina was a noble and wealthy lady who divided all of her property among the poor, and freed her slaves. When she was arrested as a Christian and appeared before the magistrate, she confessed her faith in Christ. He ordered her to be thrown into prison, and she was beheaded the next day. Eroteis, who was Capitolina’s servant, picked up some stones and threw them at the magistrate. Outraged, he commanded his guards to beat her mercilessly with sticks. By the grace of Christ Eroteis remained unharmed. Then he ordered them to behead her with a sword. In this manner, both of these Saints, the lady and her servant, died by the sword, thereby winning imperishable crowns of glory from Christ in the year 304.

You took up the power of the Divine Cross from the great Demetrius, O glorious one, and you set out against the giant. His awesome strength did not save him, for he was brought down by you. You were put to death for this, O martyr, but entered into the presence of Christ. O Nestor, pray for peace and mercy for us all.

Because you fought the good fight, you now inherited immortal glory; through the prayers of Demetrius the martyr, you became a perfect soldier of the Master. Therefore, O wise Nestor, do not cease to intercede together with Demetrius for us all.

Brothers and sisters: Even now I find my joy in the suffering I endure for you. In my own flesh I fill up what is lacking in the sufferings of Christ for the sake of his body, the church. I became a minister of this church through the commission God gave me to preach among you his word in its fullness, that mystery hidden from the ages and generations past but now revealed to his holy ones. God has willed to make known to them the glory beyond price which this mystery brings to the Gentiles – the mystery of Christ in you, your hope of glory. This is the Christ we proclaim while we admonish all men to teach them in the full measure of wisdom, hoping to make every man complete in Christ. For this I work and struggle, impelled by that energy of his which is so powerful a force within me.

At that time Jesus was casting out a devil which was mute, and when the devil was cast out the dumb man spoke. The crowds were amazed at this. Some of them said, “It is by Beelzebul, the prince of devils, that he casts out devils.” Others, to test him, were demanding of him a sign from heaven.

“When a strong man fully armed guards his courtyard, his possessions go undisturbed, But when someone stronger than he comes and overpowers him, such a one carries off the arms on which he was relying and divides the spoils. He who is not with me is against me, and he who does not gather with me scatters.”