Oct. 31 The Holy Apostles Stachys, Amplius, and their Companions; The Holy Martyr Epimachus 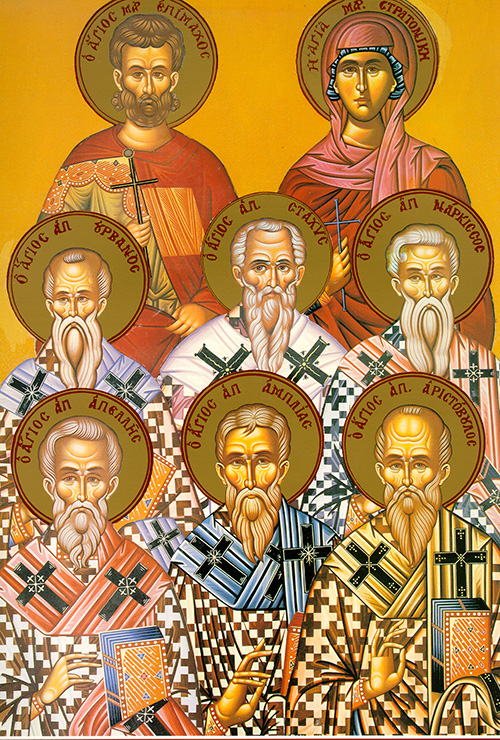 The holy apostles Stachys, Amplius, and their companions were members of the Seventy Apostles. Stachys was the helper of St. Andrew the First Called, who made him bishop of Byzantium. Amplius and Urban were also fellow-workers with St. Andrew, and were made bishops of Lydda and Macedonia, respectively. Narcissus was made Bishop of Athens by the Apostle Philip, and Apelles was made Bishop of Heraklion in Trachius.

The holy martyr Epimachus of Alexandria was a native of Egypt. For a long time he lived in seclusion on Mt. Pelusium. During a persecution against Christians in Alexandria (about the year 250), St. Epimachus in his fervent zeal came into the city, destroyed pagan idols, and fearlessly confessed Christ. For this the saint was put to torture. Among the people watching the torture was a woman who was blind in one eye. A drop of blood from the martyr healed her infirmity. After fierce torture, the saint was beheaded by the sword.

O holy apostles, intercede with the merciful God that He may grant our souls forgiveness of sins.

O Lord our God, Your holy martyr Epimachus has deserved the crown of immortality on account of his good fight. Armed with Your strength, he has vanquished his persecutors and crushed Satan’s dreadful might. Through his supplications, O Christ our God, save our souls.

Let us properly praise the pure vessels of the All-Holy Spirit, and glorious rays of the sun, the wise apostles Amplius, Urban, Aristobulus, Apelles, Narcissus, and Stachys, who the grace of our God has joined together.

You were an inspired pillar and a witness to the truth. You conquered the bodiless foe through bodily torment and received the crown from Christ. Thus, O blessed one, we cry out to you: pray unceasingly, O glorious one, to grant us great mercy.

Brothers and sisters: Even when you were dead in sin and your flesh was uncircumcised, God gave you new life in company with Christ. He pardoned all our sins. He canceled the bond that stood against us with all its claims, snatching it up and nailing it to the cross. Thus did God disarm the principalities and powers. He made a public show of them and, leading them off captive, triumphed in the person of Christ.

No one is free, therefore, to pass judgment on you in terms of what you eat or drink or what you do on yearly or monthly feasts, or on the sabbath. All these were but a shadow of things to come; the reality is the body of Christ. Let no one rob you of your prize by insisting on servility in the workshop of angels. Such a one takes his stand on his own experience; he is inflated with empty pride by his human reflections when he should be in close touch with the head. The whole body, mutually supported and upheld by joints and sinews, achieves a growth from this source which comes from God.

If with Christ you have died to cosmic forces, why should you be bound by rules that say, “Do not handle! Do not taste! Do not touch!” as though you were still living a life bounded by this world?

At that time while the crowds pressed around him, Jesus began to speak to them in these words: “This is an evil age. It seeks a sign. But no sign will be given it except the sign of Jonah. Just as Jonah was a sign for the Ninevites, so will the Son of Man be a sign for the present age. The queen of the South will rise at the judgment along with the men of this generation, and she will condemn them. She came from the farthest corner of the world to listen to the wisdom of Solomon, but you have a great Solomon here. At the judgment, the citizens of Nineveh will rise along with the present generation, and they will condemn it. For at the preaching of Jonah they reformed, but you have a greater than Jonah here. One who lights a lamp does not put it in the cellar or under a bushel basket, but rather on a lampstand, so that they who come in may see the light.”