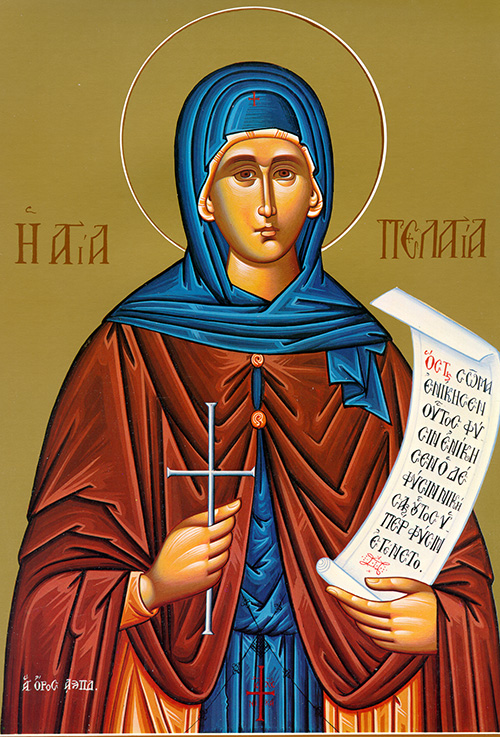 St. Pelagia the Penitent was converted to Christianity by St. Nonnus, Bishop of Edessa. Before her baptism, Pelagia was head of a dance troupe in Palestinian Antioch, living a life of frivolity and prostitution. One day Pelagia, elegantly dressed, was making her way past a church where St. Nonnus was teaching in the church about the dread Last Judgment and its consequences, so Pelagia came. The teaching made a tremendous impression on her. With the fear of God and weeping tears of repentance, she asked the saint for baptism. Seeing her sincere and full repentance, Bishop Nonnus baptized her. After this St. Pelagia journeyed to Jerusalem to the Mount of Olives. She lived there in a cell, disguised as the monk Pelagius, living the ascetic seclusion, and attaining great spiritual gifts. When she died in 457, she was buried in her cell.

In you, O mother, the divine image was strictly preserved; taking up your cross, you followed Christ. You taught us by example how to spurn the flesh, for it passes away, and how to care for the soul, which is immortal. Therefore, O venerable Pelagia, your soul rejoices with the angels.

Having exhausted your body with fasting, with vigilant prayers you entreated the Creator concerning your deeds, that you might receive complete remission. You manifestly acquired this, O mother, having shown is the path of repentance.

Brothers and sisters: Not all bodily nature is the same. Men have one kind of body, animals another. Birds are of their kind, fish are of theirs. There are heavenly bodies and there are earthly bodies. The splendor of heavenly bodies is one thing, that of the earthly another. The sun has a splendor of its own, so has the moon, and the stars have theirs. Even among the stars, one differs from another in brightness. So is it with the resurrection of the dead. What is sown in the earth is subject to decay, what rises is incorruptible. What is sown is ignoble, what rises is glorious. Weakness is sown, strength rises up. A natural body is put down and a spiritual body comes up. If there is a natural body, be sure there is also a spiritual body. Scripture has it that Adam, the first man, became a living soul; the last Adam has become a life-giving spirit.

At that time Jesus went out and saw a tax collector named Levi sitting at his customs post. Jesus said to him, “Follow me.” Leaving everything behind, Levi stood up and became his follower. After that Levi gave a great reception for Jesus in his house, in which he was joined by a large crowd of tax collectors and others at dinner. The Pharisees and the scribes of their party said to his disciples, “Why do you eat and drink with tax collectors and non-observers of the law?” Jesus said to them, “The healthy do not need a doctor; sick people do. I have not come to invite the self-righteous to a change of heart, but sinners.”