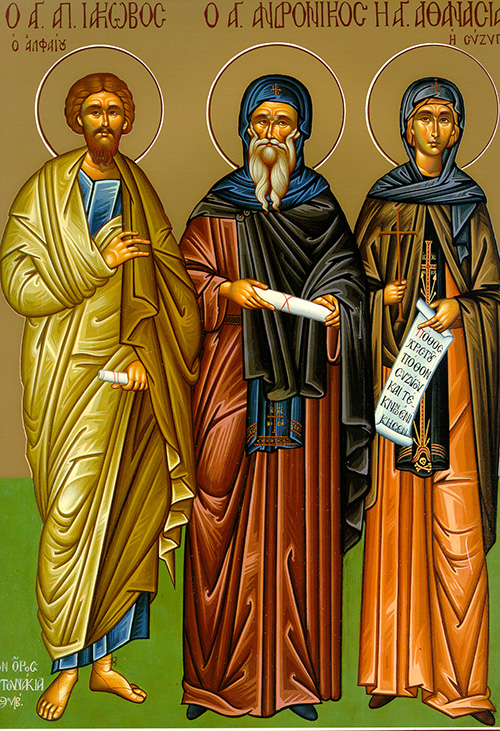 The holy apostle James Alpheus was one of the Twelve, a witness of the true words and miracles of our Lord and Savior Jesus Christ, a witness to his passion, resurrection, and ascension. After the descent of the Holy Spirit at Pentecost, it fell to James to preach the gospel in Eleutheropolis and the surrounding area. He suffered in Egypt in the town of Ostracina, being crucified by pagans.

Our venerable father Andronicus and his wife Athanasia: Andronicus was a goldsmith in Antioch during the reign of emperor Theodosius the Great. Both he and his wife were very devout, and gave a third of all they earned to the poor. They had two children and lost both of them on the same day to death. After this, they took the monastic habit in Egypt. After many years of the monastic life, they died eight days apart; Athanasia first, and then Andronicus (4th century).

O holy Apostle James, intercede with the merciful God that he may grant our souls forgiveness of sins.

Let us extol James with praises as a herald of God, for he implanted wise doctrines deeply in the souls of all. Now he stands before the throne of the Master and rejoices in the company of angels, praying for all of us unceasingly.

The seventy-two disciples returned in jubilation saying, “Master, even the demons are subject to us in your name.” Jesus said in reply: “I watched Satan fall from the sky like lightning. See what I have done; I have given you power to tread on snakes and scorpions and all the forces of the enemy, and nothing shall ever injure you. Nevertheless, do not rejoice so much in the fact that the devils are subject to you as that your names are inscribed in heaven.”

At that moment Jesus rejoiced in the Holy Spirit and said: “I offer you praise, O Father, Lord of heaven and earth, because what you have hidden from the learned and the clever you have revealed to the merest children. Yes, Father, you have graciously willed it so.”

Brothers and sisters: Let me say this much: He who sows sparingly will reap sparingly, and he who sows bountifully will reap bountifully. Everyone must give according to what he has inwardly decided; not sadly, not grudgingly, for God loves a cheerful giver. God can multiply  his favors among you so that you may always have enough of everything and even a surplus for good works, as it is written: “He scattered abroad and gave to the poor, his justice endures forever.” He who supplies seed for the sower and bread for the eater will provide in abundance; he will multiply the seed you sow and increase your generous yield. In every way your liberality is enriched; through us it results in thanks offered to God.

At that time Jesus went to a town called Naim, and his disciples and a large crowd accompanied him. As he approached the gate of the town a dead man was being carried out, the only son of a widowed mother. A considerable crowd of townsfolk were with her. The Lord was moved with pity upon seeing her and said to her, “Do not cry.” Then he stepped forward and touched the litter; at this, the bearers halted. Jesus said, “Young man, I bid you get up.” The dead man sat up and began to speak. Then Jesus gave him back to his mother. Fear seized them all and they began to praise God. “A great prophet has risen among us,” they said; and, “God has visited his people.”