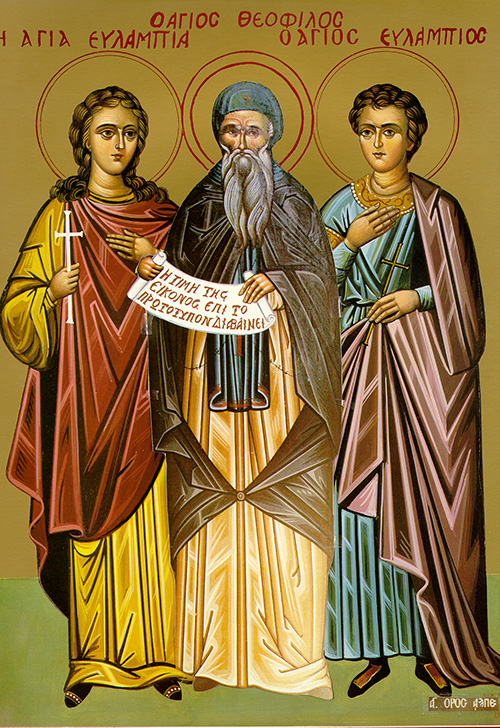 Saints Eulampius and Eulampia were brother and sister. They lived at the beginning of the 4th century in the city of Nicomedia. Eulampius became upset after reading the decree of the emperor Maximian (284-305) sentencing all Christians to execution. Eulampius was horrified that the emperor was taking up arms against his own subjects rather than fighting the enemies of his country. The youth was brought to trial and commanded to renounce the Christian Faith. His sister, Eulampia, appeared before the judges and declared that she also was a Christian. The martyrs were tortured and thrown into a red-hot furnace, but the Lord protected them from the fire. Finally, they beheaded Eulampius, but Eulampia died from her torments before she could be beheaded.

You martyrs, O Lord our God, in their struggles received an incorruptible crown from You. With your strength, they brought down the tyrants and broke the cowardly valor of demons. Through their prayers, O Christ our God, save our souls.

Let us honor the wise Eulampius and Eulampia, fearless martyrs. They were brother and sister in the flesh. THrough the power of the crucified Christ, they put to shame their persecutors guile, and they together became the glory and praise of martyrs.

Paul and Timothy, servants of Christ Jesus, to all the holy ones at Philippi, with their bishops and deacons in Christ Jesus. Grace and peace be yours from God our Father and from the Lord Jesus Christ!

I give thanks to my God every time I think of you–which is constantly, in every prayer I utter–rejoicing, as I plead on your behalf, at the way you have all continually helped promote the gospel from the very first day.

I am sure of this much: that he who has begun the good work in you will carry it through to completion, right up to the day of Christ Jesus. It is only right that I should entertain such expectations in your regard since I hold all of you dear–you who, to a man, are sharers of my gracious lot when I lie in prison or am summoned to defend the solid grounds on which the gospel rests.