Sept. 14 The Exaltation of the Honorable and Life-giving Cross 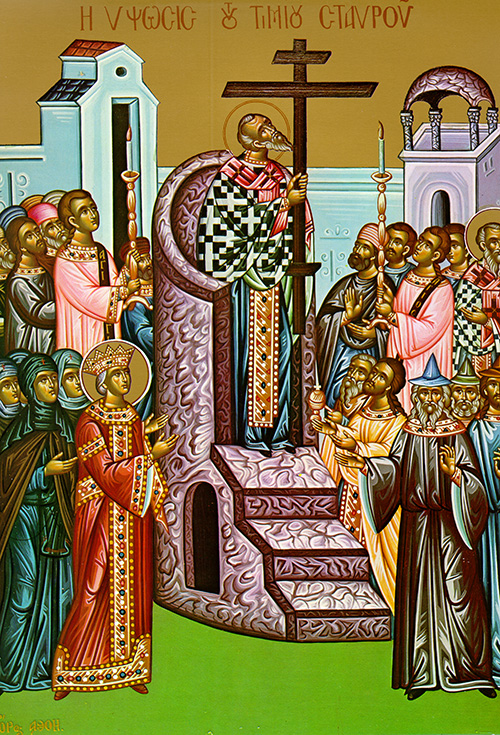 The Exaltation of the Precious, Holy, and Life-Creating Cross, which is exalted and honored the day after the dedication of the basilica of the Resurrection built over the tomb of Christ, just as the trophy and sign of his paschal victory would appear in heaven, at last foretelling his second advent to all.

Save Your people, O Lord, and bless your inheritance. Grant victory to your Church over evil and protect Your people by Your cross.

Christ our God, who were willingly raised upon the cross, grant Your mercies to the new people who bear Your name. By Your power grant joy to the Church. Give her victory over evil with Your invincible trophy, the weapon of peace, as an ally.

Brothers and sisters: The message of the cross is complete absurdity to those who are headed for ruin, but to us who are experiencing salvation it is the power of God. Scripture says, “I will destroy the wisdom of the wise, and thwart the cleverness of the clever.” Where is the wise man to be found? Where the scribe? Where is the master of worldly argument? Has not God turned the wisdom of this world into folly? Since in God’s wisdom the world did not come to know him through “wisdom,” it pleased God to save those who believe through the absurdity of the preaching of the gospel. Yes, Jews demand “signs” and Greeks look for “wisdom,” but we preach Christ crucified-a stumbling block to Jews, and an absurdity to Gentiles; but to those who are called, Jews and Greeks like, Christ the power of God and the wisdom of God.

At that time when the chief priests and the temple guards saw Jesus with Pilate they shouted, “Crucify him! Crucify him!” Pilate said, “Take him and crucify him yourselves; I find no case against him.” The Jews responded, “We have our own law, and according to that law he must die because he made himself God’s Son.” When Pilate heard this kind of talk, he was more afraid than ever. Going back into the praetorium, he said to Jesus, “Where do you come from?” Jesus would not give him any answer. “Do you refuse to speak to me?” Then Pilate asked him “Do you not know that I have the power to release you and the power to crucify you?” Jesus answered: “You would have no power over me whatever unless it were given from above.”

Pilate heard the people shouting so he brought Jesus outside and took a seat on a judges’ bench at the place called the Stone Pavement – Gabbatha in Hebrew. It was the Preparation Day for Passover, and the hour was about noon. Pilate said to the Jews, “Look at your king!” At this they shouted “Away with him! Away with him! Crucify him!” “What!” Pilate exclaimed. “Shall I crucify your king?” The chief priests replied, “We have no king but Caesar.” In the end, Pilate handed Jesus over to be crucified.

Jesus was led away, and carrying the cross by himself, went out to what is called the Place of the Skull (in Hebrew, Golgotha). There they crucified him, and two others with him; one on either side, Jesus in the middle. Pilate had an inscription placed on the cross which read,     JESUS THE NAZOREAN THE KING OF THE JEWS. This inscription, in Hebrew, Latin, and Greek, was read by many of the Jews, since the place where Jesus was crucified was near the city. The chief priests of the Jews tried to tell Pilate, “You should not have written, ‘The King of the Jews.’ Write instead, ‘This man claimed to be King of the Jews.’”

Then Jesus bowed his head, and delivered over his spirit. Since it was the Preparation Day the Jews did not want to have the bodies left on the cross during the sabbath, for that sabbath was a solemn feast day. They asked Pilate that the legs be broken and the bodies be taken away. Accordingly, the soldiers came and broke the legs of the men crucified with Jesus, first of the one, then of the other. When they came to Jesus and saw that he was already dead, they did not break his legs. One of the soldiers thrust a lance into his side, and immediately blood and water flowed out. This testimony has been given by an eyewitness, and his testimony is true. He tells what he knows is true, so that you may believe.