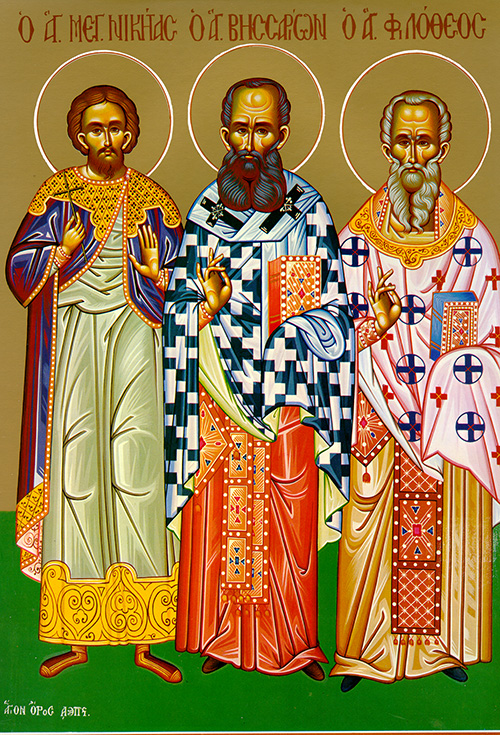 The holy great martyr Nicetas the Goth was a disciple of Theophilus, Bishop of the Goths, who participated in the First Ecumenical Council [Nicaea 325]. When the Gothic prince Athenarik began to torture Christians, St. Nicetas stood before the prince and denounced him for his paganism and inhumanity. Subsequently harshly tortured, Nicetas confessed his faith in Christ even more strongly, and prayed to God with thanksgiving. His mind was unceasingly raised up to God, and on his breast under his robe he bore an icon of the Theotokos with the Pre-eternal Christ Child standing and holding the cross in His hands. Finally, the tortures threw the soldier of Christ into the fire, where the holy martyr breathed his last, but his body remained untouched by the fire. His companion Marian took his body from the land of the Goths (Wallachia and Bessarabia) to the town of Mopsuestia, in Cilicia. There, he built a church dedicated to St. Nicetas. (372)

You lovingly took up the cross for armor, and you advanced to fight the enemy. You were burnt to death for Christ, and thus you offered up your priestly soul to the Lord. You have been rewarded with the gift of healing, O great-martyr Nicetas; now beg Christ our God to save our souls.

O glorious Nicetas, you crushed the power of deception by your perseverance in the faith and earned the crown of victory by your struggles; therefore, you now enjoy the company of angels in heaven. With them, do not cease to intercede with Christ our God that He many save all of us.

Brothers and sisters: Before the faith came we were under the constraint of the law, locked in until the faith that was coming should be revealed. In other words, the law was our monitor until Christ came to bring about our justification through faith. But now that faith is here, we are no longer in the monitor’s charge. Each one of you is a son of God because of your faith in Christ Jesus. All of you who have been baptized into Christ have clothed yourselves with him. There does not exist among you Jew or Greek, slave or freeman, male or female. All are one in Christ Jesus. Furthermore, if you belong to Christ you are the descendants of Abraham, which means you inherit all that was promised.

Brothers and sisters: as long as a designated heir is not of age his condition is no different from that of a slave, even though in name he is master of all his possessions; for he is under the supervision of guardians and administrators until the time set by his father. In the same way, while we were not yet of age we were like slaves subordinated to the elements of the world; but when the designated time had come, God sent forth his Son born of a woman, born under the law, to deliver from the law those who were subjected to it, so that we might receive our status as adopted sons.

At that time the apostles returned to Jesus and reported to him all that they had done and what they had taught.  He said to them, “Come by yourselves to an out-of-the-way place and rest a little.” People were coming and going in great numbers, making it impossible for them to so much as eat. So Jesus and the apostles went off in the boat by themselves to a deserted place. People saw them leaving, and many got to know about it. People from all the towns hastened on foot to the place, arriving ahead of them.

Upon disembarking Jesus saw a vast crowd. He pitied them, for they were like sheep without a shepherd; and he began to teach them at great length. It was now getting late and his disciples came to him with a suggestion: “This is a deserted place and it is already late. Why do you not dismiss them so that they can go to the crossroads and villages around here and buy themselves something to eat?” “You give them something to eat,” Jesus replied. At that they said, “Are we to go and spend two hundred days’ wages for bread to feed them?” “How many loaves have you?” Jesus asked. “Go and see.” When they learned the number they answered, “Five, and two fish.” He told them to make the people sit down on the green grass in groups or parties. The people took their places in hundreds and fifties, neatly arranged like flower beds. Then, taking the five loaves and two fish, Jesus raised his eyes to heaven, pronounced a blessing, broke the loaves, and gave them to the disciples to distribute. He divided the two fish among all of them and they ate until they had their fill. They gathered up enough leftovers to fill twelve baskets, besides what remained of the fish. Those who had eaten the loaves numbered five thousand men. Immediately afterward Jesus insisted that his disciples get into the boat and precede him to the other side toward Bethsaida, while he dismissed the crowd.