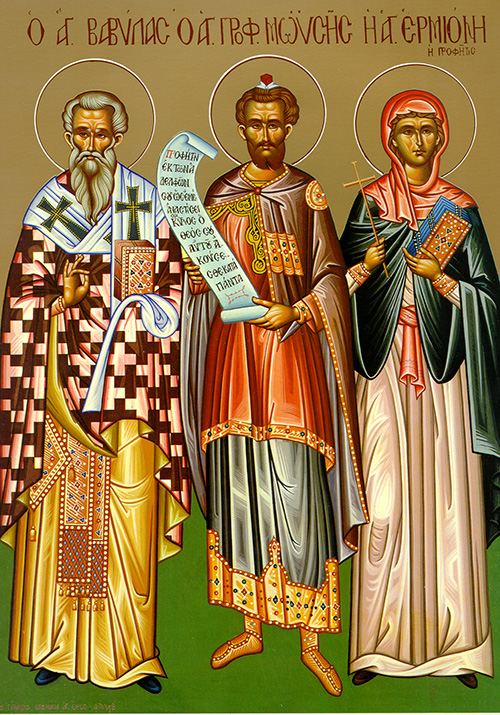 St. John Chyrostom wrote of the holy priest-martyr Babylas, “this great and wonderful man–if one can call him a man.” He was archbishop of Antioch in the time of the evil emperor Numerian. St. Babylas forbade the emperor entrance into the church because he was an idolator. In response, the emperor threw him into prison, and had students of his tortured in front of him in an attempt to have Babylas apostasize. St. Babylas encouraged them to stand firm and, after they were martyred, he joined them as a victim of the sword in the year 283.

The holy prophet Moses, was chosen by God to free his people who were oppressed in Egypt and to lead them to the promised land. God revealed himself to Moses on Mount Sinai saying, “I am who I am,” and gave the law which would direct the life of the chosen people. The servant of God died in the fullness of years on Mount Nebo, in the land of Moab near the promised land.

You shared in the apostles’ way of life and succeeded to their throne, divinely inspired bishop. You found access to contemplation in the active life. Therefore, you rightly taught the word of truth and struggled for the faith to the shedding of your blood. O Priest-Martyr Babylas, pray to Christ our God to save our souls.

O prophet Moses, you reached the summit of virtues. By this you came to see the glory of God. You received the tablets of the grace-giving Law and became the crown of the prophets and a mystery of piety; for you carried grace deep within you.

O glorious Babylas, the Church praises you. Today you are revered as a preacher of holiness and the fortitude of martyrs. Since you have become a favorite of the Lord, beg Christ to keep us in perfect peace; for we praise and glorify you, O martyr.

Because their prophecy is fulfilled among us, Moses, Aaron, and the choir of prophets rejoice. The cross id triumphant today because by it You saved us. By the prayers of these holy men, save us, O Christ our God.

Brethren: Be on your guard, stand firm in the faith, and act like men. In a word, be strong. Do everything with love. You know that the household of Stephanus is the first fruits of Achaia and is devoted to the service of the saints. I urge you to serve under such men and under everyone who cooperates and toils with them. I was very happy at the arrival of Stephanus, Fortunatus, and Achaicus, because they made up for your absence. They have refreshed my spirit as they did yours. You should recognize the worth of such men.

The churches of Asia send you greetings. Aquila and Prisca, together with the assembly that meets in their house, send you cordial greetings in the Lord. All the brethren greet you. Greet one another with a holy kiss.

It is I, Paul, who send you this greeting in my own hand. If anyone does not love the Lord, let a curse be upon him. O Lord, come! The favor of the Lord Jesus be with you. My love to all of you in Christ Jesus.

The Lord said to the chief priests and the elders of the people, “Listen to another parable. There was a property owner who planted a vineyard, put a hedge around it, dug a vat, and erected a tower. Then he leased it out to tenant farmers and went on a journey. When vintage time arrived he dispatched slaves to the tenants to obtain his share of the grapes. The tenants responded by seizing the slaves. They beat one, killed another, and stoned a third. A second time he dispatched even more slaves than before, but they treated them the same way. Finally he sent his son to them, thinking, ‘They will respect my son.’ When they saw the son, the tenants said to one another, ‘Here is the one who will inherit everything. Let us kill him and then we shall have his inheritance!’ With that they seized him, dragged him outside the vineyard, and killed him. What do you suppose the owner of the vineyard will do to those tenants when he comes?”