Sept. 5 The Holy Prophet Zachary, Father of the Forerunner and His Wife, the Holy and Venerable Elizabeth 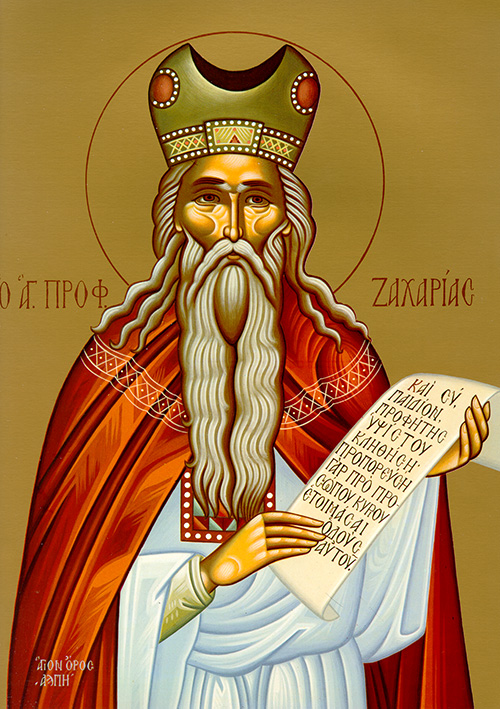 The holy prophet Zachary and his wife, the holy venerable Elizabeth, were the parents of the Forerunner John the Baptist. When she took her cousin Mary into her home, Elizabeth –full of the holy spirit– hailed the mother of the Lord as blessed among women. Zachary, a priest full of the prophetic spirit, praised God the redeemer and preached the near advent of Christ, the Dayspring from on high.

Arrayed as a priest, O wise Zechariah, you offered a worthy holocaust according to the law of God. You became a shining light and a witness to the mysteries, clearly bearing within you the signs of grace, O most wise one. You were slain by the sword in God’s temple. O prophet of God, together with the Forerunner, intercede with God that He may save our souls.

Today the prophet Zechariah, the priest of the Most High and the father of the Forerunner, has prepared a banquet for the faithful and mixed the drink of holiness. Therefore we praise him as a mystical witness of God’s grace.

Brothers and sisters: I am content with weakness, with mistreatment, with distress, with persecutions and difficulties for the sake of Christ; for when I am powerless, it is then that I am strong.

What a fool I have become! You have driven me to it. You are the ones who should have been commending me. Even though I am nothing, I am in no way inferior to the “super-apostles.” Indeed, I have performed among you with great patience the signs that show the apostle, signs and wonders and deeds of power. In what way are you inferior to the other churches except in this, that I was no burden to you? Forgive me this injustice! This is the third time that I am about to visit you, and I am not going to burden you; for I do not want what you have, I only want you. Children should not save up for their parents, but parents for children. I will gladly spend myself and be spent for your sakes. If I love you too much, will I be loved the less for that? Granted that I did not burden you – but being crafty, you say, I caught you by guile. Did I ever take advantage of you through any of the men I sent to you? I urged Titus to go to you, and I sent the other brother with him. Did Titus take advantage of you in any way? Did we not act in the one spirit, walk in the same footsteps? Do you think throughout this recital that I am defending myself to you? Before God I tell you, in Christ, I have done everything to build you up, my dear ones.

At that time when Jesus was away from the crowd, those present with the Twelve questioned him about the parables. He told them: “To you the mystery of the reign of God has been confided. To the others outside it is all presented in parables, so that they will look intently and not see, listen carefully and not understand, lest perhaps they repent and be forgiven.”

He said to them: “You do not understand this parable? How than are you going to understand other figures like it? What the sower is sowing is the word. Those on the path are the ones to whom, as soon as they hear the word, Satan comes to carry off what was sown in them. Similarly, those sown on rocky ground are people who on listening to the word accept it joyfully at the outset. Being rootless, they last only a while. When some pressure or persecution overtakes them because of the word, they falter. Those sown among thorns are another class. They have listened to the word, but anxieties over life’s demands, and the desire for wealth, and craving of other sorts come to choke it off; it bears no yield. But when those sown on good soil are the ones who listen to the word, take it to heart, and yield at thirty – and sixty – and a hundredfold.”

He said to them: “Is a lamp acquired to be put under a bushel basket or hidden under a bed? Is it not meant to be put on a stand? Things are hidden only to be revealed at a later time; they are covered so as to be brought out into the open. Let him who has ears to hear me, hear!”