Sept. 6 Memory of the Miracle of the Holy Archangel Michael at Colossae in Chionia; The Holy Martyr Eudoxius and His Companions 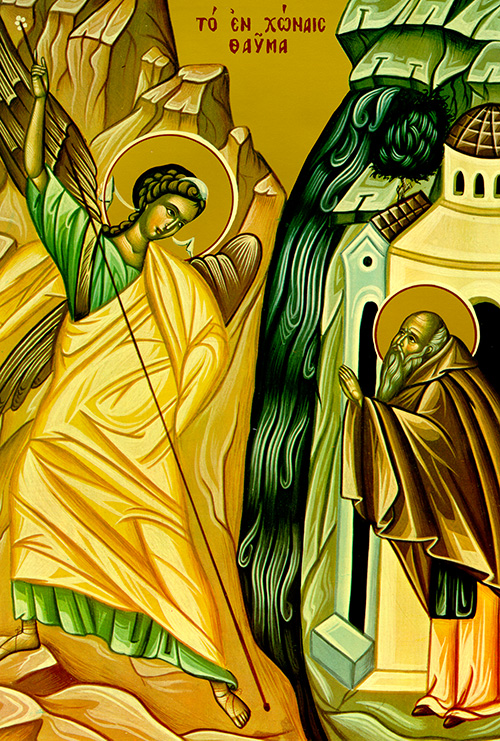 The holy martyr Eudoxius and his companions Carterius, Styriacus, Tobias, Agapius and companions at Sebaste in Armenia. Under Licinius the emperor they are said to have been soldiers who persisted in the faith of Christ and who were cast into the flames in the early 4th century.

Leaders of the heavenly armies, although we are unworthy, we always beseech you to fortify us through your prayers and to shelter us beneath the wings of your sublime glory. Watch over us who bow to you and cry out fervently: Deliver us from danger, for you are the commanders of the powers on high.

Your martyr, Eudoxius, O Lord our God, in his struggle, received an incorruptible crown from you. With your strength, he brought down the tyrants and broke the cowardly valor of demons. Through his prayers, O Christ our God, save our souls.

Leaders of God’s armies and ministers of divine glory, commanders of angels and guides of mortals, plead on our behalf for what we need and for great mercy; since you are the leaders of heavenly hosts.

You gathered wealth in heaven and showered it upon the earth. You gave bread to the hungry and received a glorious crown. You are resplendent in your confession of Christ. You were brave and died at the hands of the law; thus you have earned the wages of your work. O long-suffering Eudoxius, beg Christ to forgive our sins.

Brothers and sisters: I fear that when I come I may not find you to my liking, not may you find me to yours. I fear I may find discord, jealousy, outbursts of anger, selfish ambitions, slander and gossip, self-importance, disorder. I fear that when I come again my God may humiliate me before you, and I may have to mourn over the many who sinned earlier and have not repented of the uncleanness, fornication, and sensuality they practiced.

This is the third time I shall be coming to you. [Scripture says,] “A judicial fact shall be established only on the testimony of two or three witnesses.” I said before when I was there the second time – and I repeat it now in my absence – to those who sinned before and to all the rest, that if I come again I shall not spare you.

The Lord said to his disciples: “Listen carefully to what you hear. In the measure you give you shall receive, and more besides. To those who have more, more will be given; from those who have not, what little they have will be taken away.”

He also said: “This is how it is with the reign of God. A man scatters seed on the ground.He goes to bed and gets up day after day. Through it all the seed sprouts and grows without his knowing how it happened. The soil produces of itself first the blade, then the ear, finally the ripe wheat in the ear. When the crop is ready he ‘wields the sickle, for the time is ripe for harvest.’”

Jesus went on to say: “What comparison shall we use for the reign of God? What image will help to present it? It is like mustard seed which, when planted in the soil, is the smallest of all the earth’s seeds, yet once it is sown, springs up to become the largest of shrubs, with branches bug enough for the birds of the sky to build nests in its shade.” By means of many such parables he taught them the message in a way they could understand. To them he spoke only by way of parables, while he kept explaining things privately to his disciples.