Sept. 8 The Nativity of Our Most Holy Lady, The Theotokos and Ever-Virgin Mary 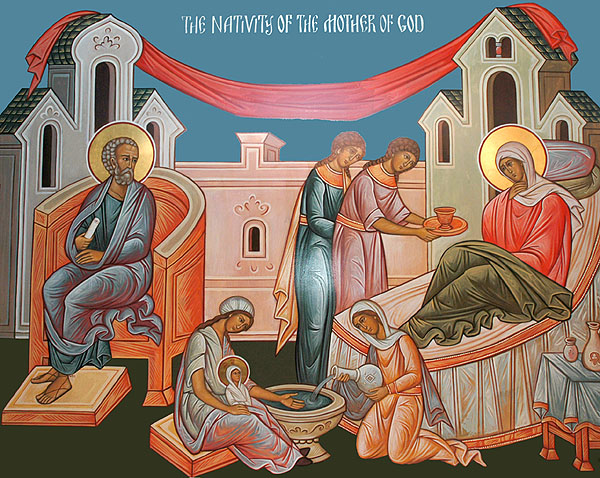 The nativity of the Theotokos and ever-virgin Mary, of the seed of Abraham, born from the tribe of Judah, from the line of King David. The Holy Theotokos was born of the elderly parents, Joachim of the lineage of David, and Anna of the lineage of Aaron. Therefore, Mary was of royal birth by her father, and of priestly birth by her mother, foreshadowing Him who would be born of her as King and High Priest. Because her parents were very old and had no children, they were ashamed before men and humble before God. In their humility they prayed to God to bring them joy in their old age by giving them a child. Mary was born in Nazareth and at the age of three was taken to the Temple in Jerusalem. In her young womanhood she returned to Nazareth and shortly thereafter heard the Annunciation of the Angel Gabriel concerning the birth of the Son of God from her most pure virgin body. From her, the Son of God was born in the flesh that he might free people from the ancient slavery of sin.

Your birth, O Virgin Theotokos, heralded joy to the universe; for from you arose the Sun of Justice, Christ our God. Removing the curse, He gave the blessing, and by destroying Death, He granted us eternal salvation.

At your holy birth, O Immaculate One, Joachim and Anna were freed from the reproach of childlessness and Adam and Eve from the corruption of death. Your people, delivered from the guilt of their faults, celebrate your birth and cry out: The barren woman gives birth to the Theotokos and Sustainer of our Life

Brothers and sisters: Your attitude must be that of Christ: Though he was in the form of God, he did not deem equality with God something to be grasped at. Rather, he emptied himself and took the form of a slave, being born in the likeness of men. He was known to be of human estate and it was thus that he humbled himself, obediently accepting even death, death on a cross! Because of this, God highly exalted him and bestowed on him the name above every other name, so that at Jesus’ name every knee must bend in the heavens, on the earth, and under the earth, and every tongue proclaim to the glory of God the Father: JESUS CHRIST IS LORD!

Paul, an apostle sent not by men or by any man, but by Jesus Christ and God his Father who raised him from the dead. I and my brothers who are with me send greetings to the churches in Galatia. We wish you the favor and peace of God our Father and of the Lord Jesus Christ, who gave himself for our sins, to rescue us from the present evil age, as our God and Father willed – to him be glory for endless ages. Amen.

I am amazed that you are so soon deserting him who called you in accord with his gracious design in Christ, and are going over to another gospel. But there is no other. Some who wish to alter the gospel of Christ must have confused you. For even if we, or an angel from heaven, should preach to you a gospel not in accord with the one we delivered to you, let a curse be upon him! I repeat what I have just said: if anyone preaches a gospel to you other than the one you received, let a curse be upon him!

Whom would you say I am trying to please at this point – men or God? Is this how I seek to ingratiate myself with men? If i were trying to win man’s approval, I would surely not be serving Christ!

I declare before God that what I have just written is true. Thereafter I entered the regions of Syria and Cilicia. The communities of Christ in Judea had no idea what I looked like; they had only heard that “he who was formerly persecuting us is now preaching the faith he tried to destroy,” and they gave glory to God on my account.

Then, after fourteen years, I went up to Jerusalem again with Barnabas, this time taking Titus with me. I went prompted by a revelation, and I laid out for their scrutiny the gospel as I present it to the Gentiles – all this in private conference with the leaders, to make sure the course I was pursuing, or had pursued, was not useless. Not even Titus, who was with me, was order to undergo circumcision, despite his being a Greek. Certain false claimants to the title of brother were smuggled in; they wormed their way into the group to spy on the freedom we enjoy in Christ Jesus and thereby to make slaves of us, but we did not submit to them for a moment. We resisted so that the truth of the gospel might survive intact for your benefit.

At that time Jesus and his disciples came to Gerasene territory on the other side of the lake. As Jesus got out of the boat, he was immediately met by a man from the tombs who had an unclean spirit. The man had taken refuge among the tombs; he could no longer be restrained even with a chain. In fact, he has frequently been secured with handcuffs and chains, but had pulled the chains apart and smashed the fetters. No one had proved strong enough to tame him. Uninterruptedly night and day, amid the tombs and on the hillsides, he screamed and gashed himself with stones. Catching sight of Jesus at a distance, he ran up and did him homage, shrieking in a loud voice, “Why meddle with me, Jesus, Son of God Most High? I implore you in God’s name, do not torture me!” (Jesus had been saying to him, “Unclean spirit, come out of the man!”) “What is your name?” Jesus asked him. “Legion is my name,” he answered. “There are hundreds of us.” He pleaded hard with Jesus not to drive them away from that neighborhood.

It happened that a large herd of swine was feeding there on the slope of the mountain. “Send us into the swine,” they begged Jesus. “Let us enter them.” Jesus gave the word, and with it the unclean spirits came out and entered the swine. The herd of about two thousand went rushing down the bluff into the lake, where they began to drown. The swineherds ran off and brought the news to field and village, and the people came to see what had happened. As they approached Jesus, they caught sight of the man who had been possessed by Legion sitting fully clothed and perfectly sane, and they were seized with fear. The spectators explained what had happened to the possessed man, and told them about the swine. Before long they were begging Jesus to go away from their district.

As Jesus was getting into the boat, the man who had been possessed was pressing to accompany him. Jesus did not grant his request, but told him instead: “Go home to your family and make it clear to them how much the Lord in his mercy has done for you.” At that the man went off and began to proclaim throughout the Ten Cities what Jesus had done for him. They were all amazed at what they heard.