Sept. 9 The Synaxis of the Holy and Just Grandparents of God Joachim and Anna; The Holy Martyr Severian 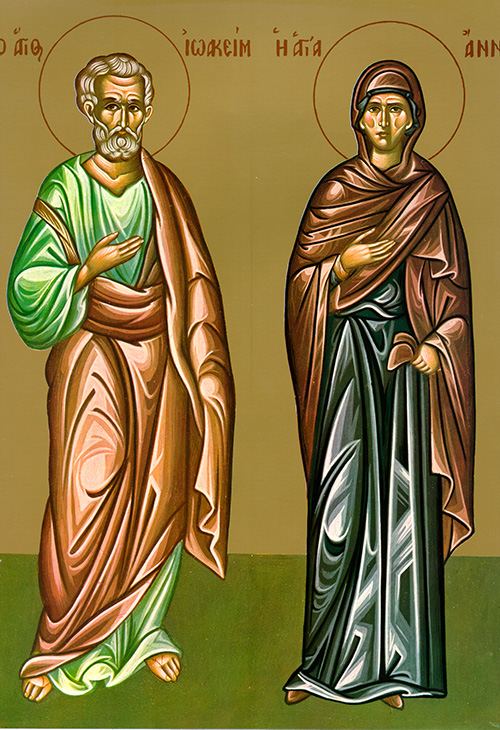 The Synaxis of the holy and just Grandparents of God, Joachim and Anna, parents of Mary the immaculate Virgin mother of God, the names of whom were preserved by the ancient traditions of Christians from the Jews. The couple lived at Nazareth in Galilee. They were childless into their old age and all their life they grieved over this. They had to endure derision and scorn, since at that time childlessness was considered a disgrace. They never grumbled, but fervently prayed to God, humbly trusting in Him. The prayer of the saintly couple was heard. An angel told them that a daughter would be born to them, Who would be blessed above all other women. He also told them that She would remain a virgin, would be dedicated to the Lord and live in the Temple, and would give birth to the Savior. Obeying the instructions of the heavenly messenger, Joachim and Anna met at the Golden Gate in Jerusalem. Then, as God promised, a daughter was born to them and they named her Mary. Joachim died a few years later at the age of 80, after his daughter went to live in the Temple.  Anna died at the age of 70, two years after her husband.

The holy martyr Severian was a nobleman from Sebaste. He comforted the Forty Martyrs of Sebaste (May 9) in their imprisonment. After their death in the year 320, he was also arrested, and hanged from a tree with stones hanging from his neck and from his feet.

The just couple who lived in a state of grace, Joachim and Anna, gave birth to this holy child for us. Therefore, the holy Church solemnly honors this feast in glory and celebrates your precious memory today. She glorifies God who has lifted up our horn of salvation in the house of David.

Your martyr Severian, O Lord our God, in his struggle received an incorruptible crown from You. With Your strength, he brought down the tyrants and broke the cowardly valor of demons. Through his prayers, O Christ our God, save our souls.

The chains of sterility are broken and Anna rejoices. She nurses the most pure Lady and invites us to sing with her to the Virgin Mother who is born for all people.

With a soul armed with courage, O God-wise one, you yourself were given over to various sufferings because you were enflamed with love of the Master, O truly wealthy one. Therefore, you accused the unjust torturer, O Severian, and you were given an incorruptible triumphal crown by God.

Those who were regarded as important, however (and it makes no difference to me how prominent they were – God plays no favorites), made me add nothing.

On the contrary, recognizing that I had been entrusted with the gospel for the uncircumcised, just as Peter was for the circumcised (for he who worked through Peter as his apostle among the Jews had been at work in me for the Gentiles), and recognizing, too, the favor bestowed on me, those who were the acknowledged pillars, James, Cephas, and John, gave Barnabas and me the handclasp of fellowship, signifying that we should go to the Gentiles as they to the Jews. The only stipulation was that we should be mindful of the poor – the one thing that I was making every effort to do.

At that time one of the officials of the synagogue, a man named Jairus, came near. Seeing Jesus, the official fell at Jesus’ feet and made this earnest appeal: “My little daughter is critically ill. Please come and lay your hands on her so that she may get well and live.” The two went off together and a large crowd followed, pushing against Jesus.

And then people from the official’s house arrived saying, “Your daughter is dead. Why bother the Teacher further?” Jesus disregarded the report that had been brought and said to the official: “Fear is useless. What is needed is trust.” He would not permit anyone to follow him except Peter, James, and James’ brother John. As they approached the house of the synagogue leader, Jesus was struck by the noise of the people wailing and crying loudly on all sides. He entered and said to them: “Why do you make this din with your wailing? The child is not dead. She is asleep.” At this they began to ridicule him. Then he put them all out.

Jesus took the child’s father and mother and his own companions and entered the room  where the child lay. Taking her hand he said to her, “Talitha, koum,” which means, “Little girl, get up.” The girl, a child of twelve, stood up immediately and began to walk around. At this the family’s astonishment knew no bounds. Jesus enjoined them strictly not to let anyone know about it, and told them to give her something to eat.

He departed from there and returned to his own part of the country followed by his disciples.