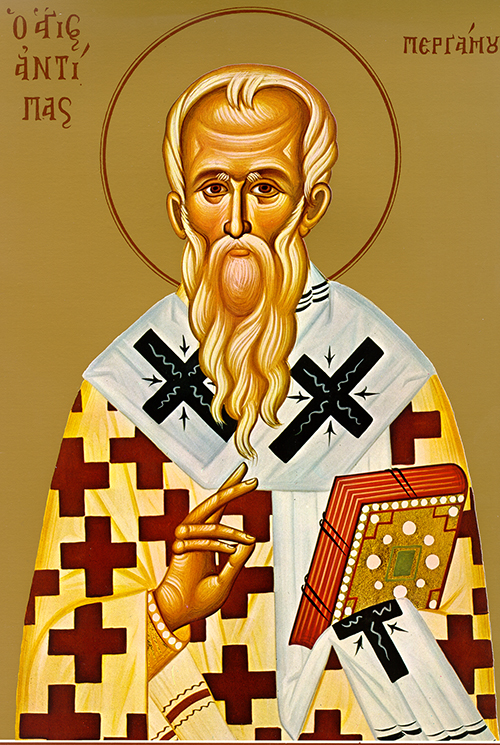 The Hieromartyr Antipas, a disciple of the holy Apostle John the Theologian, was bishop of the Church of Pergamum during the reign of the emperor Nero (54-68). During these times, everyone who would not offer sacrifice to the idols lived under threat of either exile or execution by order of the emperor. By his personal example, firm faith, and constant preaching about Christ, St. Antipas began to turn the people of Pergamum from offering sacrifices to idols. The enraged pagan priests dragged Antipas to the temple of Artemis and threw him into a red-hot copper bull, where they usually put the sacrifices to the idols. In the red-hot furnace the martyr prayed loudly to God, imploring Him to receive his soul and to strengthen the faith of the Christians. He went to the Lord peacefully, as if he were going to sleep.

You destroyed the lies of the idols, O Antipas, and you smashed the hold of the devil. You bravely professed Christ before the evil ones. Now you have taken your place among angels and offer up prayers to the Master, giving thanks on our behalf and dispensing cures. For this reason we venerate you, O martyred priest Antipas. Beg Christ our God to save our souls.

You sat on the throne of the apostles and you also adorned pastors. Having been raised up in martyrdom, O blessed saint, you shine like the sun in the sky. You chase away the deep night of godlessness, O Antipas, with the radiance of your beams. For this we praise you as a heavenly martyred priest and a source of health for us.

These are the names of the sons of Israel who came to Egypt with Jacob, each with his household: Reuben, Simeon, Levi, and Judah, Issachar, Zebulun, and Benjamin, Dan and Naphtali, Gad and Asher. The total number of people born to Jacob was seventy. Joseph was already in Egypt. Then Joseph died, and all his brothers, and that whole generation. But the Israelites were fruitful and prolific; they multiplied and grew exceedingly strong, so that the land was filled with them.

Now a new king arose over Egypt, who did not know Joseph. He said to his people, “Look, the Israelite people are more numerous and more powerful than we. Come, let us deal shrewdly with them, or they will increase and, in the event of war, join our enemies and fight against us and escape from the land.” Therefore they set taskmasters over them to oppress them with forced labor. They built supply cities, Pithom and Rameses, for Pharaoh. But the more they were oppressed, the more they multiplied and spread, so that the Egyptians came to dread the Israelites. The Egyptians became ruthless in imposing tasks on the Israelites, and made their lives bitter with hard service in mortar and brick and in every kind of field labor. They were ruthless in all the tasks that they imposed on them.

The king of Egypt said to the Hebrew midwives, one of whom was named Shiphrah and the other Puah, “When you act as midwives to the Hebrew women, and see them on the birthstool, if it is a boy, kill him; but if it is a girl, she shall live.” But the midwives feared God; they did not do as the king of Egypt commanded them, but they let the boys live. So the king of Egypt summoned the midwives and said to them, “Why have you done this, and allowed the boys to live?” The midwives said to Pharaoh, “Because the Hebrew women are not like the Egyptian women; for they are vigorous and give birth before the midwife comes to them.” So God dealt well with the midwives; and the people multiplied and became very strong.

There was once a man in the land of Uz whose name was Job. That man was blameless and upright, one who feared God and turned away from evil. There were born to him seven sons and three daughters. He had seven thousand sheep, three thousand camels, five hundred yoke of oxen, five hundred donkeys, and very many servants; so that this man was the greatest of all the people of the east. His sons used to go and hold feasts in one another’s houses in turn; and they would send and invite their three sisters to eat and drink with them. And when the feast days had run their course, Job would send and sanctify them, and he would rise early in the morning and offer burnt offerings according to the number of them all; for Job said, “It may be that my children have sinned, and cursed God in their hearts.” This is what Job always did.

One day the heavenly beings came to present themselves before the Lord, and Satan also came among them. The Lord said to Satan, “Where have you come from?” Satan answered the Lord, “From going to and fro on the earth, and from walking up and down on it.” The Lord said to Satan, “Have you considered my servant Job? There is no one like him on earth, a blameless and upright man who fears God and turns away from evil.” The Satan answered the Lord, “Does Job fear God for nothing? Have you not put a fence around him and his house and all that he has, on every side? You have blessed the work of his hands, and his possessions have increased in the land. But stretch out your hands now, and touch all that he has, and he will curse you to your face.” The Lord said to Satan, “Very well, all that he has is in your power; only do not stretch out your hand against him!” So Satan went out from the presence of the Lord.

At that time while Jesus was seated on the Mount of Olives, his disciples came up to him privately and said: “Tell us, when will all this [destruction of the temple buildings] occur? What will be the sign of your coming and the end of the world?” In reply Jesus said to them: “Be on guard! Let no one mislead you. Many will come attempting to impersonate me. ‘I am the Messiah!’ they will claim, and they will deceive many. You will hear of wars and rumors of wars. Do not be alarmed. Such things are bound to happen, but that is not yet the end. Nation will rise against nation, one kingdom against another. There will be famine and pestilence and earthquakes in many places. These are the early stages of the birth pangs. They will hand you over to torture and kill you. Indeed, you will be hated by all nations on my account. Many will falter then, betraying and hating one another. False prophets will rise in great numbers to mislead many. Because of the increase of evil, the love of most will grow cold. The man who holds out to the end, however, is the one who will see salvation. This good news of the kingdom will be proclaimed throughout the world as a witness to all the nations. Only after that will the end come.

“When you see the abominable and destructive thing which the prophet Daniel foretold standing on holy ground those in Judea must flee to the mountains. If a man is on the roof terrace, he must not come down to get anything out of his house. If a man is in the field, he must not turn back to pick up his cloak. It will be hard on pregnant and nursing mothers in those days. Keep praying that you will not have to fall in winter or on a sabbath, for those days will be more filled with anguish than any form the beginning of the world until now or in all ages to come. Indeed, if the period had not been shortened, not a human being would be saved. For the sake of the chosen, however, the days will be shortened. If anyone tells you at that time, ‘Look, the Messiah is here,’ or if they say, ‘He is there,’ do not believe it. False messiahs and false prophets will appear, performing signs and wonders so great as to mislead even the chosen if that were possible. Remember, I have told you all about it before-hand; so if they tell you, ‘Look, he is in the desert,’ do not go out there; or if they say ‘He is in the innermost rooms,’ do not believe it. As the lightning from the east flashes to the west, so will the coming of the Son of Man be. Where the carcass lies, there the vultures gather.

“Immediately after the stress of that period, ‘the sun will be darkened, the moon will not shed her light, the stars will fall from the sky, and the hosts of heaven will be shaken loose.’ Then the sign of the Son of Man will appear in the sky, and ‘all the clans of the earth will strike their breasts’ as they see ‘the Son of Man coming on the clouds of heaven’ with power and great glory. He will dispatch his angels ‘with a mighty trumpet blast, and they will assemble his chosen from the four winds, from one end of heaven to the other.’ From the fig tree learn a lesson. When its branch grows tender and sprouts leaves, you realize that summer is near. Likewise, when you see all these things happening, you will know that he is near, standing at your door. I assure you, the present generation will not pass away until all this takes place. The heavens and the earth will pass away but my words will not pass.”