Apr. 12 Our Venerable Father and Confessor Basil, Bishop of Parium 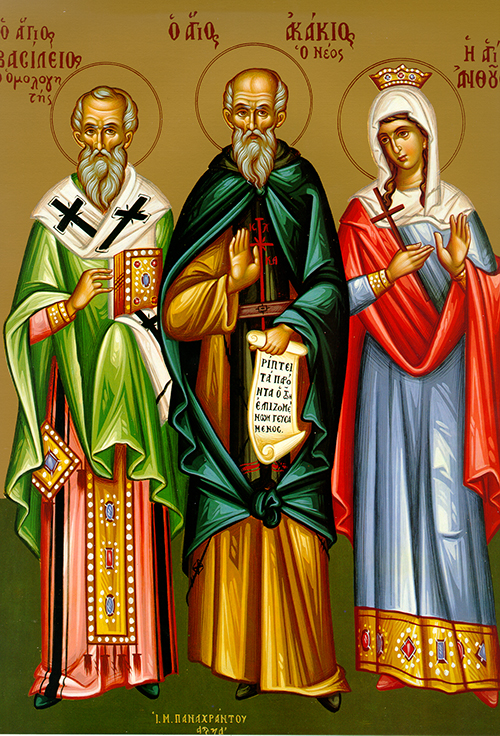 St. Basil the Confessor, Bishop of Parium, lived during the eighth century. He was elected as bishop by the inhabitants of Parium, who venerated the saint as a true pastor of the flock of Christ. When the Iconoclast heresy broke out, St. Basil resolutely came out on the side of icon veneration and refused to sign the orders for their abolition of the Council of 754 which was convened under the emperor Constantine V Copronymos (741-775). The saint avoided any contact with the heretics and did not permit them into his diocese. For his zeal, he suffered much persecution, hunger, and deprivation. St. Basil remained faithful to the Orthodox Church until his death.

O guide of the true faith, mirror of piety and commendable behavior, bright star of the universe, and adornment of pontiffs, you enlightened us all by your teachings. O wise Basil, inspired by God and lyre of the Holy Spirit, intercede with Christ our God that He may save our souls.

Having been illumined by the light from on high, you enlighten all who honor your trials with love. O father and martyred priest Basil, O blessed saint, pray unceasingly for all of us to Christ our God.

Then Job arose, tore his robe, shaved his head, and fell on the ground and worshiped. He said, “Naked I came from my mother’s womb, naked shall I return there; the Lord gave, and the Lord has taken away; blessed be the name of the Lord.”

In all this Job did not sin or charge God with wrongdoing.

“Be sure of this: if the owner of the house knew when the thief was coming he would keep a watchful eye and not allow his house to be broken into. You must be prepared in the same way. The Son of Man is coming at the time you least expect. Who is the faithful, farsighted servant whom the master has put in charge of his household to dispense food at need? Happy that servant whom his master discovers at work on his return! I assure you, he will put him in charge of all his property. But if the servant is worthless and tells himself, ‘My master is a long time in coming,’ and begins to beat his fellow servants, to eat and drink with drunkards, that man’s master will return when he is not ready and least expect him. He will punish him severely and settle with him as he is done with hypocrites. There will be wailing then and grinding of teeth.

“The reign of God can be likened to ten bridesmaids who took their torches and went out to welcome the groom. Five of them were foolish, while the other five were sensible. The foolish ones, in taking their torches, brought no oil along, but the sensible ones took flasks of oil as well as their torches. The groom delayed his arrival, so they all began to nod, then to fall asleep. At midnight someone shouted, ‘The groom is here! Come out and greet him!’ At the outcry all the virgins woke up and got their torches ready. The foolish ones said to the sensible, ‘Give us some of your oil. Our torches are going out.’  But the sensible ones replied, ‘No, there may not be enough for you and us. You had better go to the dealers and buy yourselves some.’ While they went off to buy it the groom arrived, and the ones who were ready went into the wedding with him. Then the door was barred. Later the other bridesmaids came back. ‘Master, master!’ they cried. ‘Open the door for us.’ But he answered, ‘I tell you, I do not know you.’ The moral is: keep your eyes open, for you know not the day or the hour.

“Finally the man who had received the thousand stepped forward. ‘My Lord,’ he said, ‘I knew you were a hard man. You reap where you did not sew and gather where you did not scatter, so out of fear I went off and buried your thousand silver pieces in the ground. Here is your money back. His master exclaimed: ‘You worthless, lazy lout! You know I reap where I did not sew and gather where I did not scatter. All the more reason to deposit my money with the bankers, so that on my return I could have it back with interest. You, there! Take the thousand away from him and give it to the man with the ten thousand. Those who have will get more until they grow rich, while those who have not will lose even the little they have. Throw this worthless servant into the darkness outside, where he can wail and gnash his teeth.’

“When the Son of Man comes in his glory, escorted by all the angels of heaven, he will set upon his royal throne, and all the nations will be assembled before him. Then he will separate them into two groups, as a shepherd separates sheep from goats. The sheep he will place on his right hand, the goats on his left. The king will say to those on his right: ‘Come. You have my father‘s blessing! Inherit the kingdom prepared for you from the creation of the world. For I was hungry and you gave me food, I was thirsty and you gave me a drink. I was a stranger and you welcomed me, naked and you clothed me. I was ill and you comforted me, in prison and you came to visit me.’ Then the just will ask him: ‘Lord, when did we see you hungry and feed you or see you thirsty and give you a drink? When did we welcome you away from home or clothe you in your nakedness? When did we visit you when you were ill or in prison?’ The king will answer them: ‘I assure you, as often as you did it for one of my least brothers, you did it for me.’

Now when Jesus had finished all these discourses, he declared to his disciples, “You know that in two days’ time it will be Passover, and that the Son of Man is to be handed over to be crucified.”