Apr. 13 The Holy Priest Martyr Artemon and his Companions 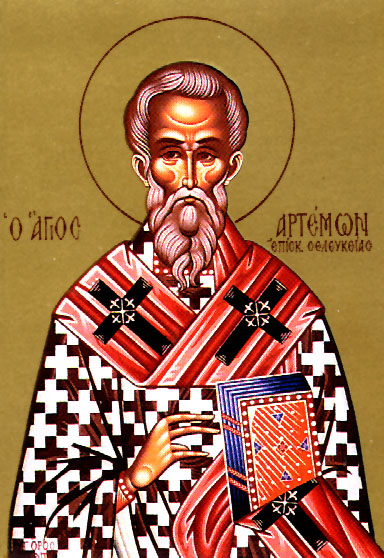 The Hieromartyr Artemon was born of Christian parents in Laodicea, Syria in the first half of the third century. From his youth, he dedicated himself to the service of the Church. The saint served the Church as a Reader for sixteen years. For his zeal in Church services, Artemon was ordained a deacon by Bishop Sisinius. St. Artemon also fulfilled this service with fervor and diligence for twenty-eight years, then he was  to the priesthood. In this position, St. Artemon served the Church of God for thirty-three years, preaching Christianity among pagans. When the emperor Diocletian (284-305) began his fierce persecution against Christians, St. Artemon was already old. The emperor issued an edict ordering Christians to offer sacrifice to idols. The hieromartyr Artemon, instructed by the voice of God, preached the Gospel in Asia Minor. Then an angel appeared to him and transported him to the place which has been revealed to him, where he converted many to Christ. Pagans seized the saint and beheaded him.

O holy priest-martyr Artemon, you lent yourself to the apostles’ way of life and succeeded them in their throne. Inspired by God, you found your way to contemplation through the practice of virtue. Therefore, you became a perfect teacher of truth, fighting for the faith unto the shedding of your blood. Intercede with Christ our God that He may save our souls.

You set out firmly with priestly devotion and completed the course in martyrdom. You passed into heaven, O wise Artemon and received laurels which will never fade. Now we come to celebrate your holy memory, crying out: As you stand before Christ, remember us, O martyr.

One day, after Moses had grown up, he went out to his people and saw their forced labor. He saw an Egyptian beating a Hebrew, one of his kinsfolk. He looked this way and that, and seeing no one he killed the Egyptian and hid him in the sand. When he went out the next day, he saw two Hebrews fighting; and he said to the one who was in the wrong, “Why do you strike your fellow Hebrew?” He answered, “Who made you a ruler and judge over us? Do you mean to kill me as you killed the Egyptian?” Then Moses was afraid and thought, “Surely the thing is known.” When Pharaoh heard of it, he sought to kill Moses.

But Moses fled from Pharaoh. He settled in the land of Midian, and sat down by a well. The priest of Midian had seven daughters. They came to draw water, and filled the troughs to water their father’s flock. But some shepherds came and drove them away. Moses got up and came to their defense and watered their flock. When they returned to their father Reuel, he said, “How is it that you have come back so soon today?” They said, “An Egyptian helped us against the shepherds; he even drew water for us and watered the flock.” He said to his daughters, “Where is he? Why did you leave the man? Invite him to break bread.” Moses agreed to stay with the man, and he gave Moses his daughter Zipporah in marriage. She bore a son, and he named him Gershom; for he said, “I have been an alien residing in a foreign land.”

One day the heavenly beings came to present themselves before the Lord, and Satan also came among them to present himself before the Lord. The Lord said to Satan, “Where have you come from?” Satan answered the Lord, “From going to and fro on the earth, and from walking up and down on it.” The Lord said to Satan, “Have you considered my servant Job? There is no one like him on the earth, a blameless and upright man who fears God and turns away from evil. He still persists in his integrity, although you incited me against him, to destroy him for no reason.” Then Satan answered the Lord, “Skin for skin! All that people have they will give to save their lives. But stretch out your hand now and touch his bone and his flesh, and he will curse you to your face.” The Lord said to Satan, “Very well, he is in your power; only spare his life.”

So Satan went out from the presence of the Lord, and inflicted loathsome sores on Job from the sole of his foot to the crown of his head. Job took a potsherd with which to scrape himself, and sat among the ashes.

Then his wife said to him, “Do you still persist in your integrity? Curse God, and die.” But he said to her, “You speak as any foolish woman would speak. Shall we receive the good at the hand of God, and not receive the bad?” In all this Job did not sin with his lips.

While Jesus was in Bethany at the house of Simon the leper, a woman carrying a jar of costly perfume came up to him at table and began to pour it on his head. When the disciples saw this they grew indignant, protesting: “What is the point of such extravagance? This could have been sold for a good price and the money given to the poor.” Jesus became aware of this and said to them: “Why do you criticize the woman? It is a good deed she has done for me. The poor you will always have with you but you will not always have me. By pouring this perfume on my body, she has contributed toward my burial preparation. I assure you, wherever the good news is proclaimed throughout the world, what she did will be spoken of as her memorial.”

Then one of the Twelve whose name was Judas Iscariot went off to the chief priests and said, “What are you willing to give me if I hand Jesus over to you?” They paid him thirty pieces of silver, and from that time on he kept looking for an opportunity to hand him over.