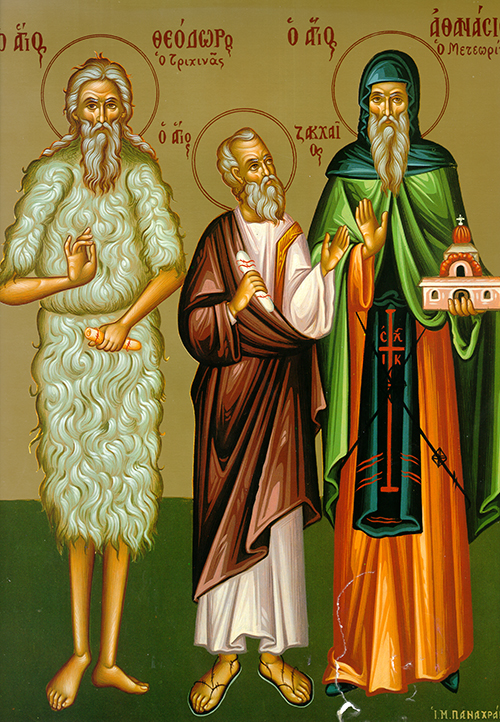 St. Theodore Trichinas was born in Constantinople to wealthy and pious parents. From childhood, St. Theodore was inclined toward monasticism, so he left his home, family, and former life in order to enter a monastery in Thrace. There he began his arduous ascetic struggles. He dressed in a hair-shirt, from which he derived the name “Trichinas” (“Hair-shirt Wearer”). He even slept on a stone in order to avoid bodily comfort, and to prevent himself from sleeping too much. His life was adorned with miracles, and he had the power to heal the sick. He reposed at the end of the fourth century or the beginning of the fifth century. A healing myrrh flows from his relics. The name of St. Theodore Trichinas is one of the most revered in the history of Orthodox monasticism. St. Joseph the Hymnographer composed a Canon to the saint.

Your abundant tears made the wilderness bloom, and your sufferings made your labors fruitful a hundredfold; you became a shining torch over the world. O venerable father Theodore, pray to Christ our God that He may save our souls.

You became famous for your life, O wise father Theodore. For, dressed in the rough garment of a hair shirt, you won treasures in heaven, which surpass those of any king. Now you have traded your laborer’s garb for heaven’s robes. Pray unceasingly for all of us, O venerable father.

In those days, Peter addressed the people: “Men of Israel, listen to me! Jesus the Nazorean was a man who God sent to you with miracles, wonders, and signs as his credentials. These God worked through him in your midst, as you well know. He was delivered up by the sat purpose and plan of God; you even made use of pagans to crucify and kill him. God freed him from death’s bitter pangs, however, and raised him up again, for it was impossible that death should keep its hold on him. David says of him: ‘I have set the Lord ever before me, with him at my right hand I shall not be disturbed. My heart has been glad and my tongue has rejoiced, my body will live on in hope, for you will not abandon my soul to the nether world, nor will you suffer your faith for one to undergo corruption. You have shown me the paths of life; you will fill me with joy in your presence.’

“Brothers, I can speak confidently to you about our father David. He died and was buried, and his grave is in our midst to this day. He was a prophet and knew that God had sworn to him that one of his descendants would sit upon his throne. He said that he was not abandoned to the nether world, nor did his body undergo corruption, thus proclaiming beforehand the resurrection of the Messiah. This is the Jesus God has raised up, and we are his witnesses. Exalted at God‘s right hand, he first received the promised Holy Spirit from the Father, then poured this Spirit out on us. This is what you now see and hear. David did not go up to heaven, yet David says, ‘The Lord said to my Lord, Sit at my right hand until I make your enemies your footstool.’ Therefore let the whole house of Israel know beyond any doubt that God has made both Lord and Messiah this Jesus whom you crucified.

At that time Jesus was present with two of his disciples. As he watched Jesus walk by he said, “Look! There is the Lamb of God!” The two disciples heard what he said, and followed Jesus. When Jesus turned around and noticed them following, he asked them, “What are you looking for?” They said to him, “Rabbi (which means Teacher), where do you stay?” “Come and see,“ he answered. So they went to see where he was lodged, and stayed with him that day. (It was about four in the afternoon.).

One of the two who had followed Jesus after hearing John was Simon Peter’s brother Andrew. The first thing he did was seek out his brother Simon and tell him, “we have found the Messiah!” (This term means the Anointed.) Andrew brought Simon to Jesus, who looked at Simon and said, “You are Simon, son of John; your name shall be Cephas (which is rendered Peter).”

The next de Jesus wanted to set out for Galilee, but first he came upon Philip. “Follow me,“ Jesus said to him. Now Philip was from Bethsaida, the same town as Andrew and Peter. Phillip sought out Nathanael and told him, “Qe have found the one Moses spoke of in the law — the prophets too — Jesus, son of Joseph, from Nazareth.” Nathanael‘s response to that was, “Can anything good come from Nazareth?“ And Philip replied, “Come, see for yourself.” When Jesus saw Nathanael coming toward him, he remarked: “This man is a true Israelite. There is no guile in him.” “How do you know me?” Nathanael asked him. “Before Philip called you,” Jesus answered, “I saw you under the fig tree.” “Rabbi,” said Nathanael, “you are the son of God; you are the king of Israel.” Jesus responded: “Do you believe just because I told you I saw you under the fig tree? You will see much greater things than that.”

Jesus went on to tell them, “I solemnly assure you, you shall see the sky opened and the angels of God ascending and descending on the son of man.”