Apr. 27 The Holy Bishop-Martyr Simeon, Relative of the Lord & Our Venerable Father Stephen, Bishop of Vladimir 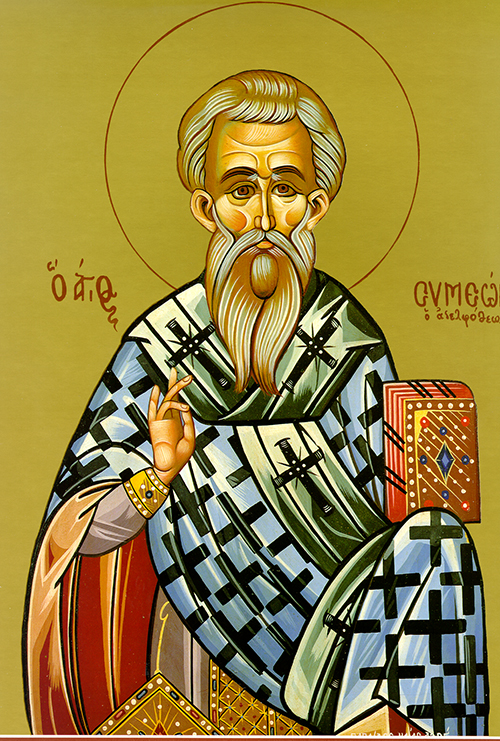 The holy bishop-martyr Simeon, cousin of our Lord, who, as it is said, was a son of Cleophas and a relative of the Savior according to the flesh. Ordained bishop of Jerusalem after James, the brother of the Lord, he was afflicted with many tortures in the persecution of the emperor Trajan. As an old man, he was crowned  by the martyrdom of the cross.

Our Venerable father Stephen, Bishop of Vladimir in Volhynia, was a disciple of St. Theodosius of the Caves in Kyiv. He labored greatly for the regulation and organization of the monastic life. He was driven from the monastery by false accusations, but God proved him innocent. He was made bishop of Vladimir, and served into old age until his death in 1094.

We praise you as a model for priests and a relative of the Lord, O Simeon. You kept the faith, and as a martyr you smashed the webs of lies. Celebrating your all-holy memory, we seek absolution of our sins through you.

Today the Church obtains a brilliant star in the person of Simeon, a perfect teacher of the things of God. Enlightened by him, she cries out: Rejoice, O holy martyr.

In those days, observing the self-assurance of Peter and John, and realizing that the speakers were uneducated men of no standing, the leaders, the elders, and the scribes were amazed. Then they recognized these men as having been with Jesus. When they saw the man who has been cured standing there with Peter and John, they could think of nothing to say, so they ordered them out of the court while they held a consultation. “What shall we do with these men? Everyone who lives in Jerusalem knows what a remarkable show of power took place through them. We cannot deny it. To stop this from spreading further among the people we must give them a stern warning never to mention that man’s name to anyone again.” So they called them back and made it clear that under no circumstances were they to speak the name of Jesus or teach about him. Peter and John answered, “Judge for yourselves whether it is right in God’s sight for us to obey you rather than God. Surely we cannot help speaking of what we have heard and seen.” At that point they were dismissed with further warnings. The court could find no way to punish them because of the people, all of whom were praising God for what had happened. The fact was, the man thus miraculously cured was more than forty years of age.

The Lord said, “My Father is at work until now, and I am at work as well.” The reason why the Jews were even more determined to kill him was that he not only was breaking the sabbath but, worse still, was speaking of God as his own Father, thereby making himself God’s equal.

This was Jesus’ answer: “I solemnly assure you, the Son cannot do anything by himself – he can do only what he sees the Father doing. For whatever the Father does, the Son does likewise. For the Father loves the Son and everything the Father does he shows him. Yes, to your great wonderment, he will show him even greater works than these. Indeed, just as the Father raises the dead and grants life, so the Son grants life to those whom he wishes. The Father himself judges no one, but has assigned all judgment to the Son, so that all men may honor the Son just as they honor the Father. He who refuses to honor the Son refuses to honor the Father who sent him. I solemnly assure you, the man who hears my word and has faith in him who sent me possesses eternal life. He does not come under condemnation, but has passed from death to life.”