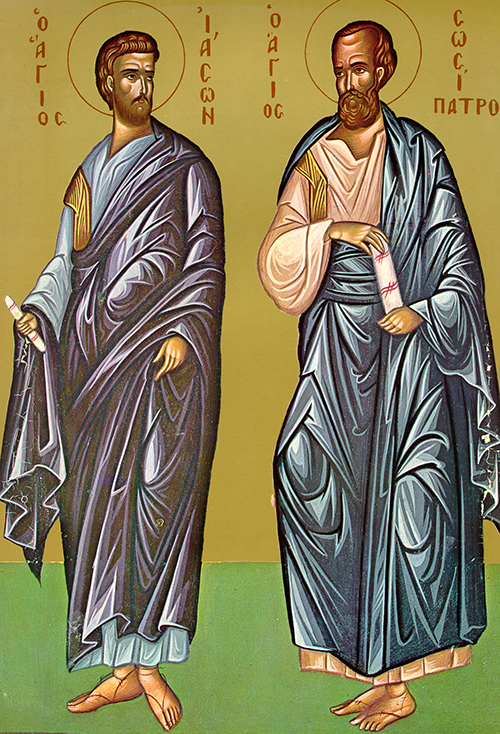 The holy martyrs Dadas, Maximus, and Quintillian were, at Dorostrorus in Moesia, were martyrs in the persecution of the emperor Diocletian in the fourth century.

Troparion for the Apostles

O holy apostles, intercede with the all-merciful God that He may grant us forgiveness of our sins.

Troparion for the Martyrs

Kontakion for the Apostles

By your message you became lights of the world, O holy Jason and blessed Sosipater. Save those who cherish your memory.

Kontakion for the Martyrs

You endured agony with courage, and the devil could not prevail over you. O martyrs equal to the angels in honor, the whole world honors your sufferings and pains. By them you have been exalted.

In those days, after being released (from court), Peter and John went back to their own people and told them what the priests and elders had said. All raised their voices in prayer to God on hearing the story: “Sovereign Lord, who made heaven and earth and sea and all that is in them, you have said by the Holy Spirit through the lips of our father David your servant: ‘Why did Gentiles rage, the peoples conspire in folly? The kings of the earth were aligned, and the princes gathered together against the Lord and against his anointed.’ Indeed, they gathered in this very city against your holy Servant, Jesus, whom you anointed– Herod and Pontius Pilate in league with the Gentiles and the peoples of Israel. They have brought about the very things which in your powerful providence you planned long ago. But now, O Lord, look at the threats they are leveling against us. Grant to your servants, even as they speak your words, complete assurance by stretching forth your hands in cures and signs and wonders to be worked in the name of Jesus, your holy Servant.”

The place where they gathered shook as they prayed. They were filled with the Holy Spirit and continued to speak God’s word with confidence.

The Lord said, “I solemnly assure you, the man who hears my word and has faith in him who sent me possesses eternal life. He does not come under condemnation, but has passed from death to life. I solemnly assure you, an hour is coming, has indeed come, when the dead shall hear the voice of the Son of God, and those who have heeded it shall live. Indeed, just as the Father possesses life in himself, so has he granted to the Son to have life in himself. The Father has given over to him power to pass judgment because he is Son of Man; no need for you to be surprised at this, for an hour is coming in which all those in their tombs shall hear his voice and come forth. Those who have done right shall rise to live; the evildoers shall rise to be damned. I cannot do anything myself. I judge as I hear and my judgment is honest because I am not seeking my own will but the will of him who sent me.”