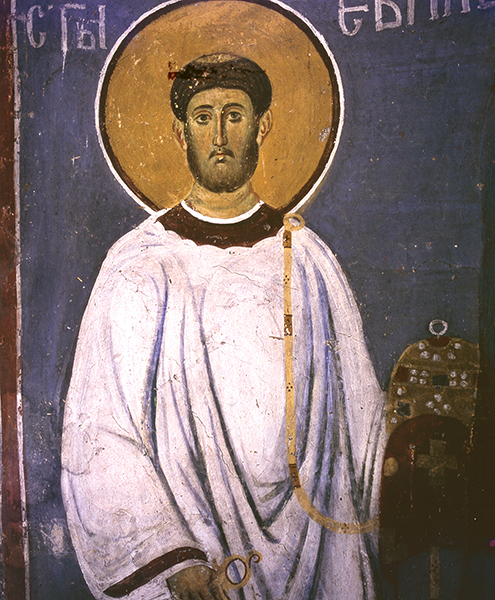 The martyr Archdeacon Euplus suffered in the year 308 under the emperors Diocletian (284-305) and Maximian (305- 311). He served in the Sicilian city of Catania. Always carrying the Gospel with him, St. Euplus preached constantly to the pagans about Christ. Once, while he read and explained the Gospel to the gathered crowd, they arrested him and took him to the governor of the city. St. Euplus confessed himself a Christian and denounced the impiety of idol-worship. For this, they sentenced him to torture. They threw the injured saint into prison, where he remained in prayer for seven days. The Lord made a spring of water flow into the prison for the martyr to quench his thirst. Brought to trial for a second time, strengthened and rejoicing, St. Euplus again confessed his faith in Christ and denounced the torturer for spilling the blood of innocent Christians. The judge commanded that the saint’s ears be torn off, and that he be beheaded. When they led the saint to execution, they hung the Gospel around his neck. Having asked for time to pray, the archdeacon began to read and explain the Gospel to the people, and many of the pagans listening came to believe in Christ. The soldiers beheaded the saint with a sword.

You martyr Euplus, O Lord our God, in his struggle received an incorruptible crown from You. With Your strength, he brought down the tyrants and broke the cowardly valor of demons. Through his prayers, O Christ our God, save our souls.

Carrying the law of Christ in your hands, O Euplus, you bravely confronted the enemy by crying out: I am ready and willing to be martyred. You bent your neck and they cut off your head. And thus you have completed your course.

Paul, by God’s will an apostle of Jesus Christ, and Timothy his brother, to the church of God that is at Corinth and to all the holy ones of the church who live in Achaia. Grace and peace from God our Father and the Lord Jesus Christ.

Praised be God, the Father of our Lord Jesus Christ, the Father of mercies, and the God of all consolation! He comforts us in all our afflictions and thus enables us to comfort those who are in trouble, with the same consolation we have received from him. As we have shared much in the suffering of Christ, so through Christ so we share abundantly in his consolation. If we are afflicted it is for your encouragement and salvation, and when we are consoled it is for your consolation, so that you may endure patiently the same sufferings we endure. Our hope for you is firm because we know that just as you share in the sufferings, so you will share in the consolation.

The Lord said to the chief priests and the elders of the people: “I tell you, the kingdom of God will be taken away from you and given to a nation that will yield a rich harvest. The man who falls upon the stone will be smashed to bits; and he on whom it falls will be crushed.” When the chief priests and the Pharisees heard these parables, they realized he was speaking about them. Although they sought to arrest him, they had reason to fear the crowds who regarded him as a prophet.