Aug. 16 The Translation of the Icon of our Lord, God, and Savior Jesus Christ, the Icon not made by human hands, from Edessa to Constantinople; The Holy Martyr Diomedes 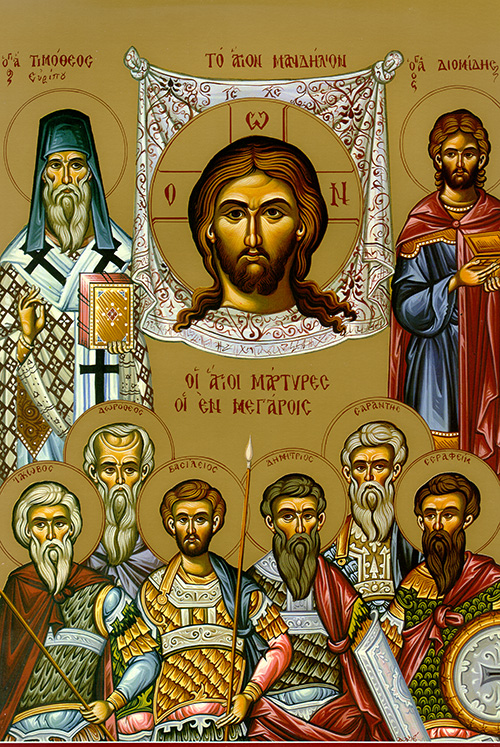 The Translation of the Icon of our Lord, God, and Savior Jesus Christ, the icon “not made by human hands,” the Holy Veil, from Edessa to Constantinople in 944: Tradition related that Abgar, prince of the city of Edessa, suffered from leprosy. Having heard of Jesus the healer in Palestine, he sent a portrait painter named Ananias with a letter to Jesus, asking him to come and cure his leprosy. Being unable to come, the Lord took a napkin and wiped his face, leaving the perfect reproduction of the Holy Face on it. Ananias took the napkin back to Abgar, along with the message that he would be partially cured of his disease, and later completely. The Apostle Thaddeus of the Seventy, preaching the Gospel, came to Abgar and healed him.

The holy martyr Diomedes was a physician from Tarsus who taught people the Christian faith as he ministered to their suffering bodies. The emperor Diocletian ordered him to be beheaded in Nicea in the year 298.

We bow before your sacred image, O gracious Lord, and beg forgiveness for our offenses, O Christ our God; for You, of Your own good will, ascended the cross in Your human nature to deliver from the enemy’s bondage those whom You created. Therefore we gratefully cry out to You: By your coming to save the world, O Savior, You have filled all with joy.

Your martyr, Diomedes, O Lord our God, in his struggle received an incorruptible crown from You. With Your strength, he brought down the tyrants and broke the cowardly valor of demons. Through his prayers, O Christ our God, save our souls.

We have come to realize the extent of your victory, the inexpressible plan of your perfect incarnation, and to recognize this miraculous and unpainted icon as a banner of that divine triumph. With hearts full of love we kiss it in homage and piety.

You vanquished the torturer and became a champion, crowned with the aurels of victory, O Diomedes. You are an initiate in the heavenly mysteries of grace and faith and an unconquerable and faithful martyr.

Readings for the Holy Veil

Brothers and sisters: Before the faith came we were under the constraint of the law, locked in until the faith that was coming should be revealed. In other words, the law was our monitor until Christ came to bring about our justification through faith. But now that faith is here, we are no longer in the monitor’s charge. Each one of you is a son of God because of your faith in Christ Jesus. All of you who have been baptized into Christ have clothed yourselves with him. There does not exist among you Jew or Greek, slave or freeman, male or female. All are one in Christ Jesus. Furthermore, if you belong to Christ you are the descendants of Abraham, which means you inherit all that was promised.

Brothers and sisters: as long as a designated heir is not of age his condition is no different from that of a slave, even though in name he is master of all his possessions; for he is under the supervision of guardians and administrators until the time set by his father. In th same way, while we were not yet of age we were like slaves subordinated to the elemets of the world; but when the designated time had come, God sent forth his Son born of a woman, born under the law, to deliver from the law those who were subjected to it, so that we might receive our status as adopted sons.

As the time approached when Jesus was to be taken from this world, he firmly resolved to proceed toward Jerusalem, and sent messengers on ahead of him. These entered a Samaritan town to prepare for his passing through, but the Samaritans would not welcome Jesus because he was on his way to Jerusalem. When his disciples James and John saw this, they said, “Lord, would you have us call down fire from heaven and destroy them?” Jesus turned toward them only to reprimand them. Then they set off for another town.

Brothers and sisters: Thanks be to God, who unfailingly leads us on in Christ’s triumphal train, and employs us to diffuse the fragrance of his knowledge everywhere! We are an aroma of Christ for God’s sake, both among those who are being saved and those on the way to destruction; to the latter an odor dealing death, to the former a breath bringing life. For such a mission as this, is anyone really qualified? We at least are not like so many who trade on the word of God. We speak in Christ’s name, pure in motivation, conscious of having been sent by God and of standing in his presence.

Am I beginning to speak well of myself again? Or do I need letters of recommendation to you or from you as others might? You are my letter, known and read by all men, written on your hearts. Clearly you are a letter of Christ which I have delivered, a letter written not with ink but by the Spirit of the living God, not on tablets of stone but on tablets of flesh in the heart.

The Lord said: “Woe to you scribes and Pharisees, you frauds! You pay tithes on mint and herbs and seeds while neglecting the weightier matters of the law, justice and mercy and good faith. It is these you should have practiced, without neglecting the others.